Appreciation of 'A History of IATEFL' / An interesting item

Among several kind appreciations Shelagh Rixon and I have received for our recently published A History of IATEFL, the following stands out - from Professor Arthur van Essen, whom ill-health prevented from becoming IATEFL's first 'non-native speaker' Chairman (i.e. President), back in 1987.

When I got home last night I found your book on the History of IATEFL.

I started reading it at once. Naturally I first read up on my own role in IATEFL during the 1980s. I think you have given a fair account of what happened at the time and how I felt it.

Your book reads like a novel! This is not the least compliment that one can pay a historian! Allow me to congratulate you and your co-author on this splendid achievement.

He's absolutely right that "reading like a novel" is a wonderful compliment, but we're also happy that he considers it 'fair', since Arthur van Essen's own role in the IATEFL story is an interesting and at times oppositional one.

I was triply pleased that Professor van Essen went on to offer the following donation to the Warwick ELT Archive:

As small token of my gratitude and appreciation I will send you in return an old, worn and taped-up copy of an authentic issue of a German journal on language and literature, which appeared in Germany during the war and which for that reason is unlikely to have ever reached the UK. The issue contains two contributions, one by my old friend Herman Bongers, who was Harold Palmer’s collaborator during the 1930s while Herman was working as a teacher of English in the Dutch East Indies. The other contribution is by Harold Palmer himself.

The issue is full of pencil marks by me in the margins of Herman’s article and also contains a pencil note in Dutch ‘terug naar Harold’ (=back to Harold) by Herman on the title-page.

We have now received this. It is quite a remarkable item, having been published right in the middle of wartime in Germany, with contributions from these two leading Dutch and British scholars (see my The Writings of Harold E. Palmerfor more on Palmer and his collaboration with Bongers late in life). On Bongers, van Essen writes:

Herman (who repatriated on the Independence of Indonesia) and I served together on the board of the Vereniging van Leraren in Levende Talen in the late 1970s. Herman was then in his early eighties. When he was about to move into a care home, he gave me some of his publications on language pedagogy and vocabulary selection, which I in turn donated to the library of the Institute of Applied Linguistics of the University of Groningen.

And he ends his message:

I believe this issue of the German journal is in good hands with you.

We will certainly take care of it, and will try to find out more about The English Literary and Educational Review for Continental Readers, at some point! 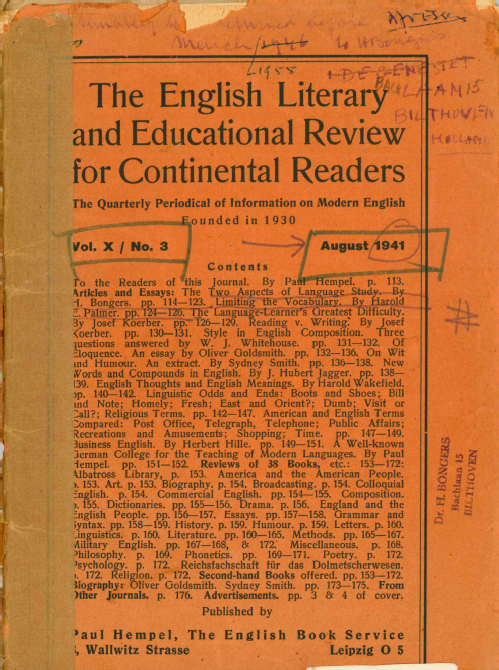 Many thanks on behalf of the Warwick ELT Archive to Diana Metzner, who gave a presentation at the IATEFL 2017 conference in Glasgow called 'Testing times! My 40 years' experience of ELT in Germany' (available to view here: https://iatefl.britishcouncil.org/2017/session/testing-times-my-40-years%E2%80%99-experience-elt-germany). She has donated to us the 9kg of books she had brought from Germany to show the audience. Thanks, Diana! Donation of pamphlet of lectures by C.C. Fries and W. Freeman Twaddell, from Rob Lowe

Many thanks to Rob Lowe for his recent donation to the Warwick ELT Archive of a rare item he obtained in Tokyo - Lectures by C.C. Fries and W.F. Twaddell, published in 1958 for the Englsh Language Exploratory Committee, Tokyo, by Kenkyusha. Charles Fries (19887-1967) was the principal founder of the 'Oral Approach' - a precursor of audiolingualism - which was diffused in Japanese schools from the mid-1950s to mid-1960s (see Lynn Earl Henrichsen's book Diffusion of Innovations in English Language Teaching: The ELEC Effort in Japan, 1956-1968). Many thanks to Irene Lavington, British Council London, for her donation to the ELT Archive of J.M.D. Meiklejohn's A Short Grammar of the English Tongue with Two Hundred and Eighty Exercises(n.d. publ. Meiklejohn and Son, London). This edition was 'intended for circulation in Egypt, India, and the British Colonies' Thanks very much to Mick Hammond of the Centre for Education Studies at Warwick for his donation of a Linguaphone German course from around 1961 (this is the date of a long personalized letter of encouragement from the Linguaphone Institute Director of Studies to L.M. Arrowsmith Esq. which came with the set) - see photos below. Mick has recently blogged about the course here: https://mickhammond.wordpress.com/2016/11/01/language-learning-a-thing-of-the-past/ Thanks very much to Harvey Smith, formerly of the Centre for British Teachers, for his generous donation of several boxes of materials relating to projects for the improvement of English language teaching in developing countries.

I gave this opening talk at a one-day conference for teachers in Milan today - full details, including recording and powerpoints at the above webpage

Richard Smith gave an introductory one-hour webinar on 'Researching ELT History' for IATEFL Research SIG on 25 January 2016. The recording and powerpoint slides are available at the above website.

Donation of materials by Paul Snowden

Thank you very much indeed to Paul Snowden for his donation of a few rare books, all current in Japan when Harold Palmer developed his 'Standard English Course' there:

Paul also donated: a well-used copy of an English-English dictionary that Kenkyusha brought out before the Idiomatic and Syntactic English Dictionary(Kaitakusha, 1942, eds. Hornby, Gatenby and Wakefield)-- a 1955 reprint of a first edition dated Showa 13, i.e. 1938. Paul wrote about this dictionary in his piece on A.S. Hornby in the Britain and Japan: Biographical portraits series edited by Hugh Cortazzi.