Follow-up to YAY to Russell Brand!! from For blog's sake

Russell Brand has changed his date at the Arts Centre and postponed until 17th December...the cheeky swine!

Now I will have to wait even longer to see the strangely attractive, self-confessed “woman adorer” – hmmmm. Yay – rather excited…just booked tickets for me and eight friends to go and see the strangely attractive and slightly crazy Russell Brand at Warwick Arts Centre on 24th November. I know it’s a long time away but will just have to be patient!

I think he is great on Big Brothers Big Mouth so am curious to see what one of his stand-up gigs will be like!! Yay!

Follow-up to Kenilworth Festival from For blog's sake

The Kenilworth Festival starts tonight! Get down to Talisman Square at 6pm to enjoy Celtic folk group, Rack and Ruin and a nice glass of wine!

Events are happening all weekend – and the weather forecast has finally cleared up so we won't be soaked on Abbey Fields on Sunday!

Yay! Very excited about going to see Trainspotting at the theatre tonight. Quite interested in how they will recreate the film version on stage though – quite a challenge I should think.

For about 8 months now, I have been a member of the Kenilworth Festival Committee, helping to organise this years event! Kenilworth has a festival I hear you cry?!

Last year was the first Festival in Kenilworth for 66 years so it was quite an achievement for the small committee who organised it! I get the impression that the committee has grown even smaller since last year and now consists of about 7 or 8 people – I joined the troup last August. You may have seen the coverage in the local press about this years event…

It is going to be on the Bank Holiday weekend at the end of May – Friday 26th – Monday 29th.

Events during the weekend include:

On the Sunday, the Festival will take over Abbey Fields all day, starting at 10:30am with a Songs of Praise style morning service. Other events on Abbey Fields will include:

I must admit my ignorance when Dave Willetts was first suggested at the Committee…. I did have to ask who he was – turns out he is a massive star of the musicals – and we all know that everyone loves a good musical! Dave Willetts has played the leading role in Les Miserables, Phantom of the Opera and Jesus Christ Superstar. You can find out more about Dave Willetts at his official website - link

Finally, I admit this is a shameless plug for the Kenilworth Festival, but when the sun is shining on Abbey Fields on Bank Holiday Sunday and there are loads of people chilling out with picnics and enjoying the music and entertainment – it will be great! Many of the events are free but there is a charge for some of the larger events. You can buy tickets online – link

Got up bright and (very) early but it was raining : ( Every other day had been bitterly cold but the sun was always shining – I think we started taking it for granted so weren't expecting to wake up to rain.

We got a taxi to Bloomingdales and arrived there at 8:30am – however, we weren't to know that it didnt open until 10am! Of course, being the bossy, organised one – I got blamed! So, we went to a nearby café and had lots of tea and a little bit of cake. There was a dog parlour a couple of doors away from the cafe and the cutest dog ever – it was sooo tiny, could have just put it in my pocket! Anyway, at 9:50 we went back to Bloomingdales and were waiting for the store to open in the porch area with a few posh/snobby american people. It was very funny when Emily was leaning against the wall in the porch and knocked a massive picture down. Luckily it didn't break but all of the posh people were frowning and looking less than impressed! Emily was laughing – I was cringing!! When the store opened, I was going to tell the attendant but this snooty woman beat us to it which made us look even more naughty! 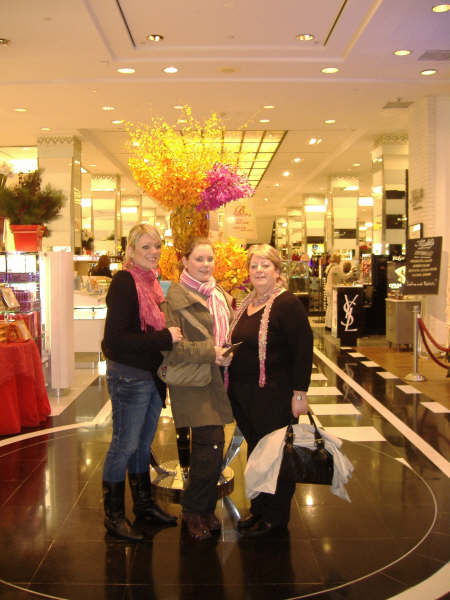 We had a little look around and Mary and I bought some Escada perfume – mine was for Mom – and collected our free gifts from the visitors centre. It's quite good – you can get tickets from the concierge at the hotel, and it entitles you to discounts and free gifts in the larger department stores.

We then got a subway to Greenwich Village to have a look around the area. The guy in the hotel gift shop had told us to go there and have a look around the quirky shops and cafes and stuff but when we got there it was still raining so we couldnt really see very much of the shops and walking around the streets was not very enjoyable. We decided to get a taxi to Macys instead and planned to visit the Empire State Building which was nearby. When we go there visibility was awful because of the weather and we couldnt even see the top of the Empire State Building so we decided to put that off until another day!

We went into Macys and had lunch in Au Bon Pain  yummy. We then decided to split up and have a proper look around Macy's so Lau and I went off and Mary, Anna, Em and Rose went around together. After about half an hour in Macy's, Laura and I decided that we didn't really like it that much so we left Macys and went to explore outside. People had told us that the shopping in New York was great and it was so cheap etc but we didn't really agree with that. Macy's was nice but the clothes were still fairly expensive and then there was a really cheap area where the clothes were just really poor quality and common. Anyway, outside Macy's there was a store called Journeys which had some nice clothes and trainers etc. We went to Foot Locker, H&M, Gap etc and then we discovered the Manhattan Mall which was nearby and contained lots of smaller shops. We got some shoes – $30 for two pairs – and bought some I Love NY t-shirts and keyrings etc and Lau got a jumper and scarf for Gav. We met back up with the others who had spent about three hours trapsing around Macy's. They did buy a few things but agreed with us that Macy's wasn't as great as they had expected. Apparenty they didn't think to leave Macy's and explore outside so instead they had carried on wandering around inside – and even visited the Ben and Jerry's Ice Cream stand in there.

We got a taxi back to the hotel to get ready to go to the theatre. We had booked well in advance to go and see Beauty and the Beast at the Lunt Fontane on Broadway. We were going to go the Ben Bensons Steak House for tea but when we got there it was really expensive and the queue for food was pretty big and we didn't really have time to wait so we went for a wander around and found a TGI Fridays nearby. We then went to the theatre and Beauty and the Beast was AMAZING. I think it was one of my best things in New York. I actually cried it was so great – should I be admitting that?! Because the shows in New York run for months/years on end – the set etc on stage is so stunning and the actors have got their performances spot on. It was brilliant – I definitely reccommend it.

After the show it was pretty difficult to get a taxi as everyone leaves Broadway around the same time. Anna, Mary and Rosie managed to get a taxi but Em, Lau and I had to walk around for a bit before we managed to find one – we were almost tempted to get on one of those bikes with the funny cart thing on the back but they could only hold two people and we decided we would have looked slightly stupid! It was also slightly weird when some man stuck his face in my cousins face and sucked his teeth at her(!) – don't know what we did to provoke that but glad we managed to find a taxi and escape the weird teeth-sucker!

So, after our third full day we were really feeling at home in New York and were starting to feel sad that our hoiday was already half way through!

The Vagina Monologues…is about Vaginas!

Now I may have been slightly naive and foolish to think that it would be about anything else right?! To be honest, I was just expecting monolgues about realtionships, men, sex, love etc – but basically, the main theme is VAGINAS.

It was the opening night at the Birmingham Hippodrome last night, and Nina Wadia, Michelle Collins and Anneka Rice walked onto the stage – scripts in hands! I was a bit put off at first, wondering why they hadn’t rehearsed the play and learnt their lines, but as soon as the show started I realised that there was no way that the actresses could be expected to remember everything they had to say!

As well as the individual monologues, there was discussion amongst the women: “If your Vagina could speak, what would it say?”, “What would your Vagina wear?”. The writer of the Vagina Monologues has interviewed thousands of women about their vaginas and everyone has a different view!

There was also an interesting Vagina fact that I will share with you all – it was referred to as the ClitFact. There are apparently 8000 nerves in the Vagina – twice as many as in the male penis!

As well as being very funny, blunt (and at times slightly embrassing), the Vagina Monologues also had a very serious side. One of the monologues focused on female genital mutilation and abuse and another was about a young girl who had been raped. The audience fell silent. The Vagina Monologues initiated V-Day – a global movement to stop violence against women that has gained the endorsement of many prominent female figures.

But back onto the humorous side of the Vagina Monologues, it was very amusing to watch Nina Wadia fake a triple orgasm on stage – and I was a bit worried about some of the men in the audience! I was expecting the audience to be mostly women – but there were a few brave men there who i’m sure enjoyed the show and I think they will be better off knowing what they now know about women and their vaginas!

The show runs until the 4th February