I can be so dim sometimes!

I received my vehicle licensing reminder (V11) in the post a few weeks ago and then suddenly realised last night that my tax disc expires today!

So, I bought my Certificate of Motor Insurance and my MOT Test Certificate to work with me this morning and went straight to the Post Office to get a new tax disc. I handed my documents over to the woman behind the counter, who quickly pointed out that my MOT certificate expired last June.

Realising that I had bought the wrong one with me, I decided that I would have to drive home and get the right one to ensure that I would be able to renew my tax today – I am petrified of the new vehicle licensing adverts that claim that the computer can tell if you haven't renewed your tax and will automatically send you a fine!

I drove home and went straight to my boxfile with all important documents in (i'm very organised!) – only to discover that it was not in there. Suddenly panicing, I went back out to check the car, to find that the MOT certificate had been in the glove box all along and that I had not needed to make the hour round journey home at all!

What a waste of a lunch hour!! Grrr

The other Eleanor Lovells...

A friend of mine saw a ghost of a young woman whilst she was helping out at a school, in a building, which used to be known as Knowle Manor. The staff at the school told my friend, ‘Oh, that would have been Eleanor! A sad story; she died on her wedding day, a long time ago, accidentally locked herself into a large chest in a game of Hide & Seek, died of suffocation.

The Urban Myth about Eleanor being locked in a chest during a game of hide–and–seek, apparently comes from this poem…

The mistletoe hung in the castle hall
The holly branch shone on the old oak wall.
The Baron's retainers were blithe and gay,
Keeping the Christmas holiday.

"I'm weary of dancing, now," she cried;
"Here, tarry a moment, I'll hide, I'll hide,
And, Lovell, be sure you're the first to trace
The clue to my secret hiding place."

At length, an old chest that had long laid hid
Was found in the castle; they raised the lid.
A skeleton form lay mouldering there
In the bridal wreath of that lady fair.

Follow-up to Kenilworth Festival from For blog's sake

The Kenilworth Festival starts tonight! Get down to Talisman Square at 6pm to enjoy Celtic folk group, Rack and Ruin and a nice glass of wine!

Events are happening all weekend – and the weather forecast has finally cleared up so we won't be soaked on Abbey Fields on Sunday!

So I got up at about 2:30am on Saturday morning and headed to Birmingham International Airport with my cousins Laura and Anna – wearing rather fetching Cowgirl hats! Trashy I know! Met my other cousin Jenni there and flew to Murcia in Spain! 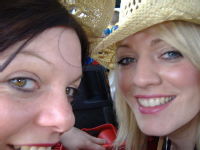 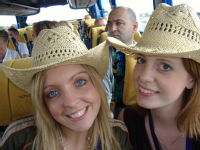 Spent the morning walking around the local city of Cartagena and trying to find a supermercado so that we could get some booze to drink by the pool in the afternoon. It was a bit overcast and subsequently, no–one put any sun lotion on – there were a few sunburnt brits by the end of the day! Went for a swim in the less–than–warm swimming pool but the sun managed to break through the clouds a few times to dry me off!

My cousins Laura and Anna couldn't resist the opportunity to get on BRMB again as they broadcast live from the poolside in the afternoon. I think my highlight was when Laura nearly started to cry live on the radio as she was talking about Anna departing to New York tomorrow! It was a fab day and we met lots of nice people!

See the rest of the photos of La Manga

On Sunday, we then ended up heading to Celebrity Soccer Six at St Andrews footy ground. We got into the VIP area with lots of d–list celebs including Caprice, Rebecca Loos, lots of Big Brother has–beens, some of the Hollyoaks cast, Lee Sharpe, Roy Walker(!), Jeff Brazier – you know the sort! To be fair, I was quite pleased to see Maggot, Eggsy and a few from GLC. We didn't stay until the end of the day because we were all shattered from the day in Spain! All in all, it was a very random weekend and very fun! Last night I was on a date, and found out that the guys parents have the same name as my old pet ducks from when I was about 8 years old – Rosie and Robert.

This isn't Rosie or Robert – it's just a cute duckling. Yay! Very excited about going to see Trainspotting at the theatre tonight. Quite interested in how they will recreate the film version on stage though – quite a challenge I should think.