So we woke up on New Years Eve and we looked out the window to find that it was snowing!! We had all been hoping/expecting to see some snow in New York so we were all pretty excited.

We got a cab to Times Square and planned to meet outside Planet Hollywood, but once again - the problem of getting two taxis meant that we managed to loose each other. I ended up with Anna and Mary, and Laura got lost with Emily and Rosie (who still had both the mobile phones!). As usual, Mary and Anna didn't seem to worried that we had lost the others as they were distracted by the Naked Cowboy!

We had decided to have a pretty relaxed day since we had a long night ahead in Times Square watching the ball drop(!). We split into pairs to have a look around the shops and try to spend the last of our dollars before heading home the following day. Emily and Laura got carried away looking around the shops and ended up walking all the way to Macy's and had to get a taxi back, Rosie and I went around a few of the souvenier shops getting I Love NY gifts and postcards/keyrings etc for friends and family – the usual tourist junk – and Anna and Mary went to their favourite place – Starbucks! Even at this time in the afternoon, we noticed that people were already starting to congregate arund Times Square – some people had blankets with them and cardboard etc to sit on at the side of the road – making sure that had a good spot ready for the evening celerbations. There were also people handing out little self-heating sachets that you rub in the palms of your hand and then put inside your gloves to keep your hands warm, and other people were handing out inflatables, hats etc.

We all met back up at Villa Pizza at 12:45 and had some lunch before going back to the hotel for a rest before our ngiht out. Rosie and I were a bit reluctant to 'have a rest' on our last full day in New York – we were running out of time in the Big Apple and didn't want to waste it resting so we went back out in a cab and had a look around some more of the shoe shops etc around Macy's.

We went out at about 3:45pm and got a taxi to Times Square – well, not exactly to Times Sqaure as all the roads around there were being closed off because so many people were already gathered for the evening celebrations. We made our way to Virgils Restaurant in the snow where we had a lovely dinner. No-one told us that you were menat to order starters to share – so we all ordered one each….there was soooo much food. I ordered the BBq Riblets, Laura and Mary had Chicken Hot Wings, Anna had a huge plate of Nachos…I can't remember what Em and Rosie had. Then for our main course we ordered Train Wreck Fries – Chips covered in bacon, cheese, chillies, salsa, guacamole – the lot!! Was soooo ful but somehow managed to squeeze in some of Anna's dessert – an ice cream sandwich!!

By the time we had finished our meal it was just before 6pm so we had to go to Times Square to see the ball rise to the top of the tower (which it later drops from). We thought we had it all planned – Virgils restaurant was right near the start of Times Square, so theoreticaly, we could have just walked to the end of the street and been in the best spot to watch the ball, however, the pplice had already closed our street off so we had to go about six blocks down before they would let anyone in!! It was a bit chaotic as everyone was rushing and pushing, and we were struggling to keep up with the crowds after having such a big dinner!!

Anyway, we managed to get into position by about 6:15pm – although our position was pretty disappointing…..there were just so many people there!! From where we were stood we could barely even see the ball! It was more like a spec!! Everyone was squashed together and it was a bit wet and cold but every hour there was a big cheer as another city around the world hit midnight…only problem was – we were so far from the entertainment that we couldn't see the screens very well, or hear the loudspeakers so we didn't even know which city we were cheering in!

At 7pm, we cheered the UK in and there were a few others Brits in the crowd so that was nice, but by about 7:30pm (after just over 1 hour in Time Square) Laura, Mary, Anna and Em decided to leave and head back to the hotel to watch it on TV!! To be fair, it was freezing cold, we could hardly see/hear any of the entertainment and midnight was still five hours away! I don't think they could face another five hours of being stood around in the cold, but I refused to go back to the hotel. I had travelled across the Atlantic to go to New York for New Years Eve – I wasn't prepared to miss the real thing – I could watch it on the TV at home! Rosie and I stuck it out until the end! Luckily, the police did a great job of controlling the crowds, and a couple of times we were moved forward through the barriers so we were a bit nearer to the excitement! At midnight it was worth the wait! There were plenty of fireworks and lots of singing – Auld Lang Syne followed by Imagine. And then that was it – everyone just turned around and left. 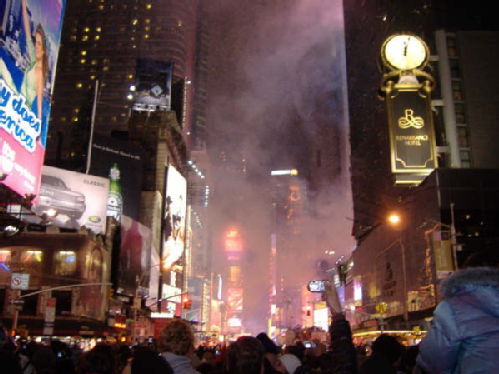 We realised it would be a struggle to get a cab as everyone was after one, so we just followed the masses and kept on walking and some how I figured out the way back to the hotel..it was only about 20–30 mins walk and was good to warm up on the way back! All in all, it was cold, damp and a lot of waiting around but midnight was worth it – although i'm not sure I would do it again!