Ok, so I forgot to write down much about what we did on this day so will have to try and remember. Bearing in mind it was three months ago, I may miss some details... 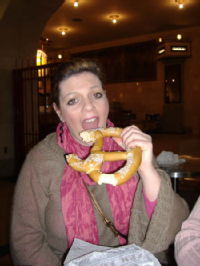 We started off the day at Grand Central where we had breakfast. There are loads of nice eating places downstairs in Grand Central Station and also a nice market area that sells lots of delicious, fresh foods.....cheeses, meat, fish, breads etc. Anyway, I had a lovely cheese and bacon omlette as did my aunty Mary and cousin, Laura. Anna, however, decided to go for something a bit more fancy and ordered some sort of Chicken and Roasted Veg Sandwich thing - Anna - what was that? Anyway, it cost her loads compared to our $5 omlette and she didn't even like it, so then she went for a pretzel – and by pretzel I mean a big NY style pretzel – which apparently aren't as nice as our snack pretzels in the UK. It was really salty and not very tasty according to Anna so she ended up with a pecan danish which cost about $2! For the rest of us, it was the best NY brekkie – Anna didn't enjoy it at all!

After breakfast, we decided to head to the Empire State Building, which we weren't able to visit the previous day due to the awful weather. It seems that everyone else in NY had the same idea and the queue went right around the block. It was a bit worrying as I was in a taxi with Mary and Anna, and Laura was in a taxi with Emily and Rosie. Now we had two mobile phones with us in NY - and Emily and Rosie had them, so when we arrived at the Empire State and couldn't find Laura and the girls due to the amount of people there, I started to worry. Mary and Anna couldn't be bothered to walk to the end of the queue, so suggested that we went to the main front doors in case they were waiting there. I was trying to look for them whilst Mary and Anna were taking their photos in front of the sign for the Empire State. Then I suggested we walked to the end of the queue where we managed to find them. Obviously we then abandoned the trip up the Empire State and instead we got a subway to Greenwich Village.

Following our unsuccessful trip to Greenwich Village the previous day, we decided to try it again today. We got a subway to Union Square and as we emerged from the subway the sun was shining so brightly – it was gorgesous. We did a bit of shopping – we all got some shoes/boots from a store called Shoe Mania. We then walked down Broadway towards Soho passing lots of nice, smaller shops – much better than the big department stores. After about two hours of walking/shopping we decided to head back to the hotel with our shopping bags.

After a quick refresh, we got a taxi Downtown to Brooklyn Bridge; this time it was Anna, Laura and I in one taxi, and Mary Emily and Rosie in the other – once again we sent both of the people with mobile phones in the same txi – clever! So we arived at the foot of Brooklyn Bridge – we told both of the drivers to go to Water Street )I think that was what it was called) and drop us there, just under the bridge. We arrived first, and it turns out our drivere didn't drop us where he said he would – but we didn't realise. We started to worry after about 20 minutes when my aunt and cousins didn't arrive but eventually they turned up. Apparently they had been driving around the foot or Brooklyn Bridge looking for us in the taxi for ages – cost them a lot more than our taxi did!

We walked half way across the Brooklyn Bridge and we were told that it was best if you don't look back until you get to the middle, so that when you turn around it should be quite a sight – and it was! We got our timing just right so that the sun was just going down and it was amazing. There were loads of helicopters flying over head with tourists in and the pedestrian part of the bridge is raised above the road so you can see the cars flying past on the road below. Its a bit strange to think that some people cross that road every day of their lives and we thought it was so impressive just to be there looking at the Manhattan skyline at dusk – it was beautiful. 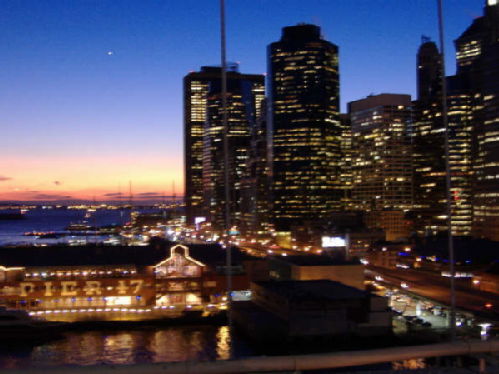 After the bridge we went to Starbucks for a coffee (Mary and Anna's favourite place!) and then got a taxi to the Heliport on the Hudson River (West Manhattan). This was probably my favourite part of the holiday – we took a helicpoter ride around New York. It apparently only lasted 7–9 mintues but it was sooooooo cool. Definitely worth the money. It was crazy to see the roads and avenues that are just like criss-cross rows of lights. And I had never been in a helicopter before so it was great to experience the difference between flying in a helicopter than in a plane. It banks over quite a lot to turn corners, and my cousin was very apprehensive about this before we took off as she hates flying. But once we were back on the ground she was so excited that she had done it. We all loved it and I would definitely do it again!

After that, we got a taxi to the Rockefeller Centre to get some dinner, but it turned out that all of the restaurants etc shut at 7:30pm. I was very surprised but it was good to go and see the massive tree (that was in Home Alone) and see the people ice skating. We went to the Top of the Rock to view New York from the observation level and then walked to Times Square and had tea at Applebys – which turned out to be one of our favourite places for dinner – yum yum. 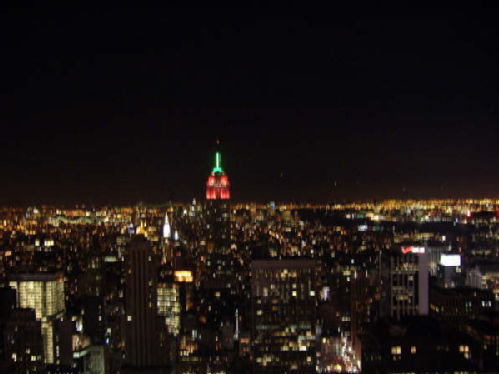