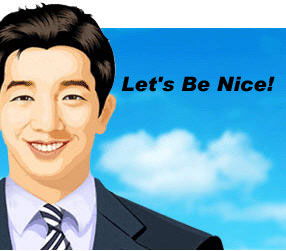 i'm pretty tired of all this continuing beige controversy and i'd like to propose a solution.
at 12 noon this friday, no matter where you are on campus, insult everyone around you and prepare to be insulted for a good few minutes. when you're finished with that, take about a quarter of an hour to be completely outraged. draft a few letters of complaint, feel your blood pressure rising. then, when that's all getting too much, apologise to and forgive everyone else. hopefully that should get it all out of our collective system.

something that doesn't involve the word 'beige'

oops, i've already said it.
posting purely for the sake of posting and breaking the beige-related deadlock (christ, 2 beiges already. no, 3!!!) i'm going to write an entry entirely dedicated to the wonderful, wonderful band lucky jim and thank them personally for their song 'our troubles end tonight' which contains the lyric 'the pain of love is trivial, up in the cosmic flow.'
good work, lucky jim.

…it really doesn't take much to annoy some people, does it? for those of you who aren't aware, my good friend mr chris carter posted on his blog recently a declaration against the apathy which does, unfortunately, characterise a proportion of our university. at high risk of being hit by the barrage of criticism and controversy which was immediately levelled at chris and which resulted in his blog being taken down, i feel i must mention this on my own site.

now, what really astonishes me about this whole situation is the extremism of the general reaction to what was clearly a tongue-in-cheek post not without self-deprecation or a healthy dose of…dare i mention it… irony.
it is precisely this sense of irony which seems to be lacking amongst a great deal of students unable to do anything but take themselves absolutely seriously, and ready at a moment's notice to be outraged by something…anything.
i find it particularly demoralizing that in a university which rightly prides itself on a liberal sentiment, an attitude oppositional to freedom of speech and, it must be said, firmly aligned with the right wing, seems to be springing up, rather retrospectively.
whilst i would not suggest that such attitudes should not be articulated – to do so would negate my own sentiment – i do find it surprising that they exist in the first place; particularly in this supposedly leftist centre of learning. granted, personal attacks or deeply egregious material should not be posted; but it does not seem that chris felt the need to stoop this low; and it does seem ironic (there's that word again) that the responses of those who criticised him for it were not only misinformed, without self-consciousness or a sense of humour; but that they rapidly descended into personal attacks themselves (to whoever commented 'i hope you rot'...oh dear.)

what i also consider worrying is the level of 'nannying' which occurs at this university and which led to complaints against chris' blog which resulted in its being taken down by administrators. not only does this suggest a worrying 'told on you' attitude, but it also reminds me of the age-old response to the needlessly offended: just don't look at it.
if something such as chris' anti-apathy declaration strikes a chord of offence with you, examine why this is; presumably, because you identify with it on some level, and are therefore guilty of that which annoys so many of us in the first place.
yes, everyone (apart from chris, apparently) has the right to exercise their own opinion – and not all of us will be excited by the same things. nevertheless, the tide of apathy at warwick is an astonishingly difficult one to combat; and i do get the impression that those who complained have never tried to do just that. chris and myself have both tried constantly throughout our university careers to generate interest; chris in music, myself in student-written theatre; and, far be it from me to whine, both of us have come up against some very demoralizing opposition from some of the student community.
granted, music and theatre aren't everyone's thing, but the thwarting of many of our attempts to make these accessible to all has been deeply frustrating. this frustration has only been compounded by the events of the last few days; i can only hope it will generate creativity of the sort evinced by chris (albeit a creativity which is often articulated in a rather ascerbic manner) and that it will not cause us, exhausted, to sink into the apathy against which we rail.
in the meantime, let's hope we can all relax a little bit. and let's not forget our senses of humour.

or, to sate the urges of those of you just itching to get het up about something…
your mum.

well now everyone, i am now an ordained minister of the universal life church, california. unfortunately i didn't get a certificate, but here's the text of the email i received, so you'll just have to believe me:

This is to confirm that

has been ordained as a minister of the Universal Life Church, Modesto, California.

apparently, i am now authorized by the church to perform the rites and ceremonies of the church (except circumcision), including weddings, funerals, baptisms and blessings and i am committed to always do the right thing.

what more can i say?

okay, gordon random, this one's for you.
i haven't got too much news right now apart from the fact that i have a shitheap of work to do, but i should share with you the fact that i received some very interesting emails this morning. one was inviting me to join the criminal justice department (isn't it a bit of a worry that lawyers, police and doctors are being recruited via email?); one was from 'chiqia brassard' and read simply 'angley chaston'; and one contained only this picture: 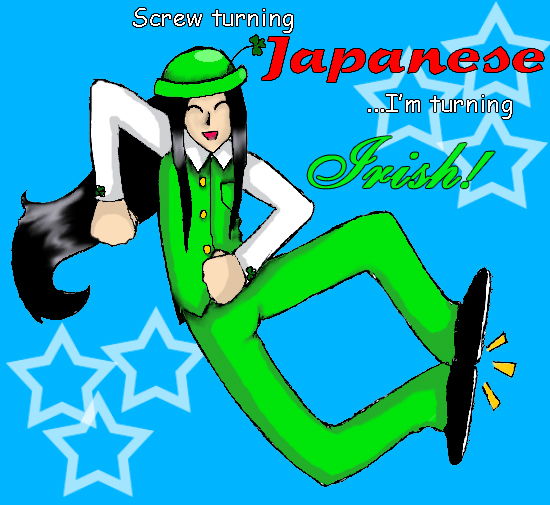 that's pretty messed up right there.
anyway, gordon has requested that i post something involving the following:

so i'm going to write a short poem involving all these things:

"Oh, man with long hair,
why your hair be so long?
Can't you see how stupid it looks?
You'd look much better with a short back and sides,
And then maybe the pigs would start finding you more attractive.

You could cover your shirt in flapjack crumbs,
Balance a robin delicately upon your newly-shorn head,
Attach a stapler to your key ring to make it look as if you drive a Chevrolet,
And wear some yellow goggles.
And then that girl who says she likes you a lot, but isn't 'in the right place for commitment right now', but yet still keeps on flirting with you, and you think she likes you but you're not sure, so you try and make a move but then she backs off, and then you apologise and then she won't bring it up but you can feel the tension rising between you –
You know that girl? –
She'll go out with you.

"Ballard and Remington are strangely drawn to each other, and after a quick backseat fuck in an airport parking garage, they attend – in a jaw-dropping scene – a bizarre nighttime guerrilla theater where Vaughn and a stunt driver re-create (sans padding or helmets) the fatal 1955 crash of James Dean in his Porsche 555 Spider, the "Lil Bastard.""

that'll be the day!
remington, where are you?

god, i'm in the learning grid, ALONE, and i will be here until 2am, so if anyone fancies paying me a visit, please do. anyway, at least i can get some SERIOUS WORK DONE while i'm here. hmmm…

anyway, here's lesson two of my art school.
'the kiss' by gustav klimt absolutely and utterly sucks. look at for a moment. 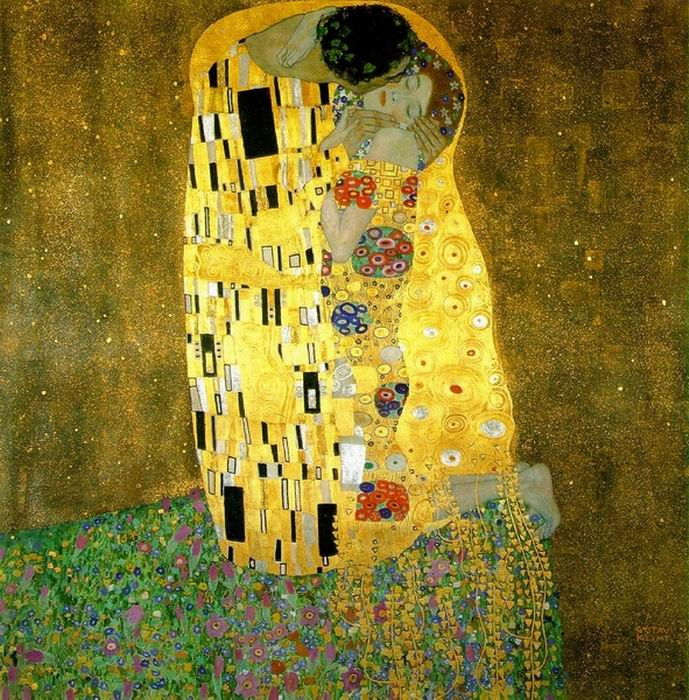 do you see how badly it sucks? good, i'm glad we understand each other.

…this one's for you.
anne geddis and celine dion, together at last! 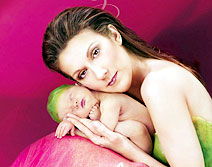 i can't quite express how much this picture makes my soul shrivel.

well now, i've just seen 'open water', and i can honestly say that it was one of the most irredeemable piles of piss through which i have ever had to sit. it was so awful, in fact, that i felt compelled to do THIS to the poster: 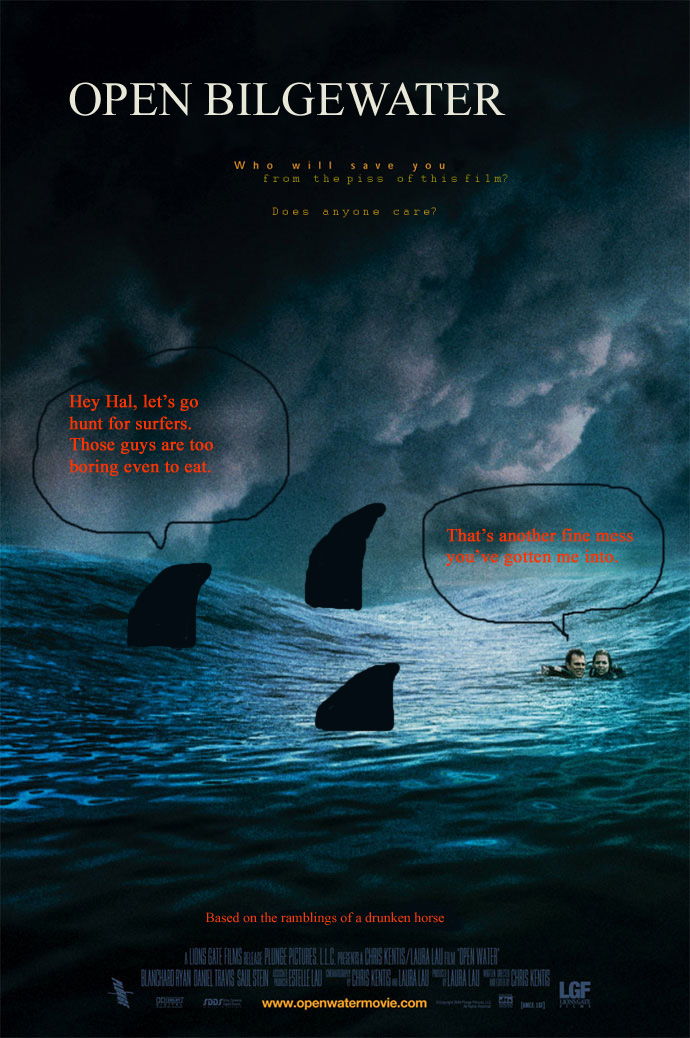 seamless photoshopping there!
other than that absolute suckitude, today was ace. i met up with roisin and david in belfast, thus: 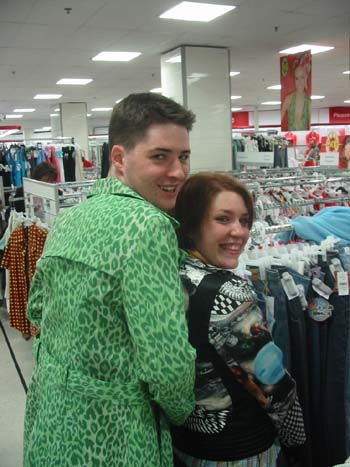 some good looking attire going on there… 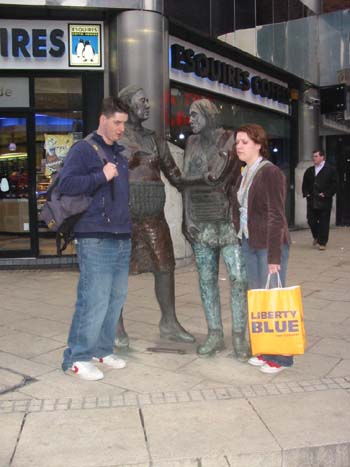 …and some delightful belfast municipal art.