Follow-up to World's grimmest thing: UPDATE from Talking Behind the Psychic's Back

thanks for david for a new contender in the 'world's grimmest thing' category…
a woman hunkered down in the doorway of loughborough poundstretcher in the middle of the night taking a shit.

a startlingly predictable turn of events

just received this in my email. my brain is melting with exhaustion but this seems to be offering me free gas for a year at only $150 a month. now, the 'free' element of this seems to be a fallacy equalled only by that of the 'upgrade offer' in the library cafe which enables us to 'upgrade' from ribena to lucozade at an extra cost of only 30p (what? what? doesn't this just mean 'don't have ribena, try lucozade instead'?) 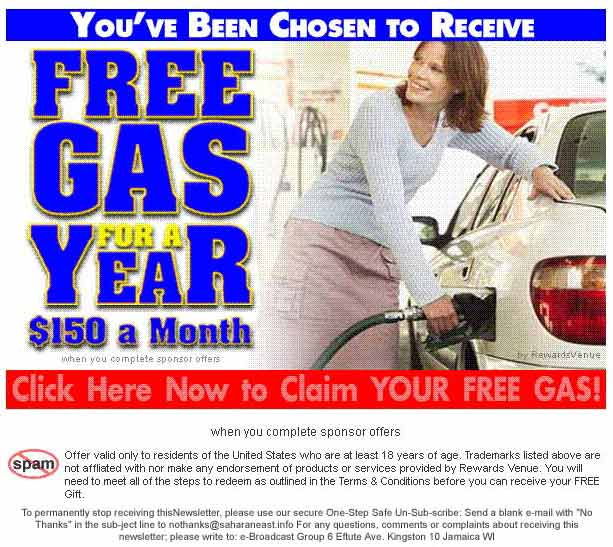 god, i'm tired. i'm so tired that i can't feel my left hand. i'm stuck in the learning grid until 2am though waiting for carter to finish DJing some absurd 80s night, or something, so here i am.

oh god! why is everyone else in here talking in super-speeded-up french? gah!!!

oh sartre, how right you were. truly, hell is other people.
not much to report other than that i have been glaring at the woman seated in front of me for several minutes. she's been staring at her computer with an utterly aghast expression since i arrived; also, she's wearing a t-shirt that says 'chicks rule' and she just put on a hoodie with the same slogan. for some reason, this has made me feel irrationally very angry. if anyone else is about, do tell me something nice… i'm losing it…

A child said 'What is the grass?' fetching it to me with full hands. How could I answer the child? I do not know what it is any more than he.

i have just skimmed my way through 'leaves of grass' by walt whitman and i can honestly say that it was one of the biggest piles of bilge i have ever read. so, in honour of mr whitman himself, i'd like to propose a…

that's right, pen the most atrocious verse you can think of and chuck it in the comments box. there really aren't any terms and conditions at all, except that the closing date is the tenth of may. a copy of 'the new poetry', edited by our very own david morley, will wing its way to the winner. and that's the truth. i eagerly await your responses…

i just put 50p into the vending machine outside the library. 'polo mints, please,' i said. the little whirring mechanism happily whirred around; '15 pence change, and a good day to you', it answered. unfortunately, nothing was dispensed. our friend mr vending machine had no more polo mints, no it didn't, no more.
either i'm seriously distracted or i'm a complete moron.

WILL SOMEONE PLEASE OIL THAT CHRISTING DOOR?!?!

guh + the worst joke in the world

gah!!
let's get some WD-40 in here, please. i will be happy to come oil the doors as part of my middle-class / middle-age sunday activities which also include dusting my window sill and washing my car.

anyway, according to the 'internet', this is the worst joke in the world:

"A couple decide to go for a meal on their anniversary and after some deliberation decide on their local Chinese restaurant. They peruse the menu and finally agree to share the chef's special chicken surprise. The waiter brings over the meal, served in a lidded cast iron pot. Just as the wife is about to start in on the meal, the lid of the pot rises a tiny amount and she briefly sees two beady little eyes looking around before the lid slams back down.
"Jesus, did you see that?" she asks her husband. He hasn't so she asks him to look in the pot.
He reaches for it and again the lid rises, and again he sees two beady little eyes looking around before it firmly slams back down.
Rather perturbed he calls the waiter over, explains what is happening and demands an explanation.
"Well sir", says the waiter, "What did you order?"
"We both chose the same", he replies, "the chicken surprise."
"Oh I do apologise, this is my fault" says the waiter, "I've brought you the Peking Duck."

jesus christ. can anyone do worse than that?!

today's lesson will address that contentious issue of cubism. cubism was an artistic movement which developed in the early twentieth century under the influence of picasso and cezanne. the basic theory behind it was that the sphere, cone and cylinder were the basis for all physical formations and that every aspect of the subject presented could be seen at once with the appropriation of multiple points of view, if you will. cubism had run its course by the end of the first world war, but its influence could be felt throughout twentieth-century art.

unfortunately, it was a total pile of piss. 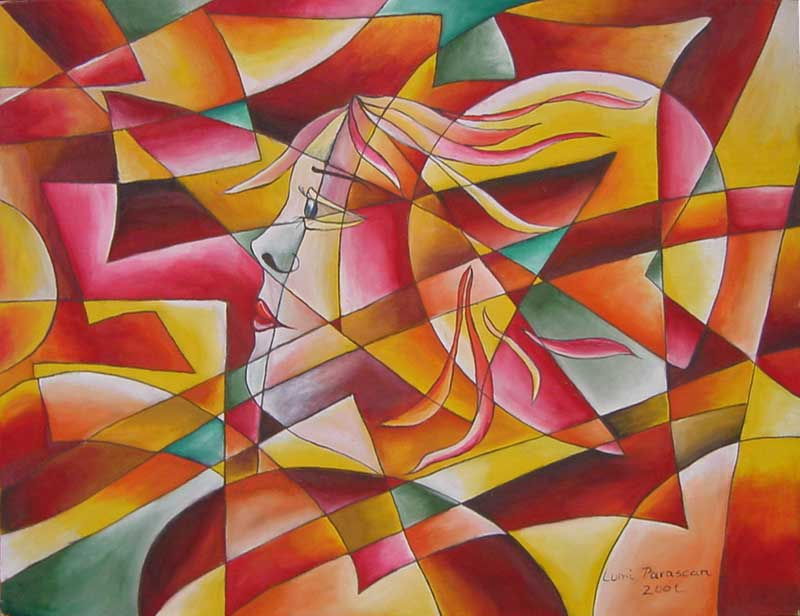 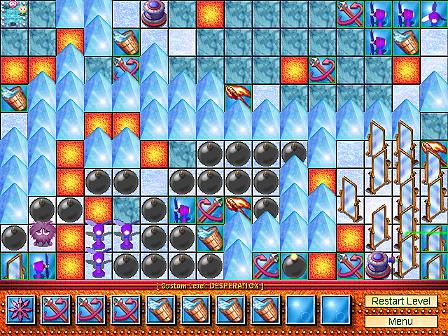 it seems that i will be going to rainbows this evening (guh). so if any of you characters fancy coming along, i'll see u there! 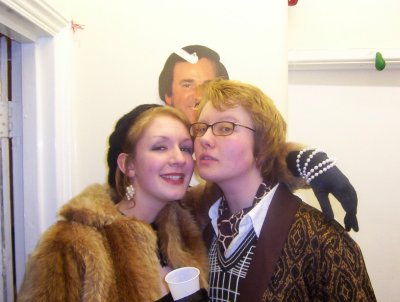 three cheers for the modern you…

yes, i'm back, inconsequential internet chaff here i come!
basically (god i hate it when people say basically) i've put some photos on a disc and i'm going to post them for a bit of craic.

right!
now, i'm so hungry right about now that my hands are shaking and i might soon collapse, but i'm blogging anyway, because THAT'S THE KIND OF DEDICATION I HAVE. to be honest with you, there's not too much news, as i've spent the last week or so working on my ridiculously huge essay on mexican cinema…

… which hasn't been so much fun. i feel like i should still be working though, especially as the guy sitting next to me in the computer room is working on TWO COMPUTERS AT ONCE. i can't talk about the pope because i might faint, although i have visited his fan site and i'm seriously considering buying one of these hats: 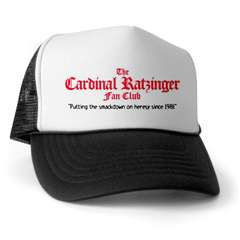 our new housemate ally has moved in, and chesham japes continue as ever: 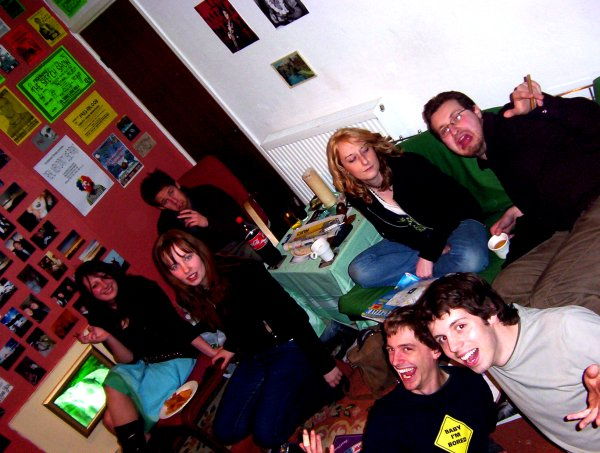 anyway, the weekend was grand, we all attended a birthday party on friday night with the slightly precocious dress theme 'don't surrender to your gender'. carter managed to get away with wearing a ridiculous dress but dave, tom and i couldn't cobble up any girls' clothes between us or think of any way in which we could bend our gender any more without causing the entire world to invert upon itself and collapse, so we went as new romantics, obviously, thus: 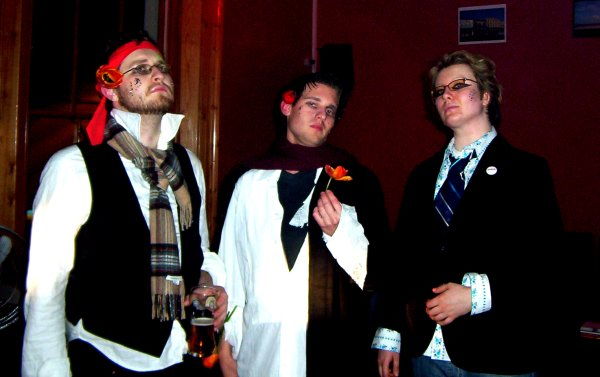 … and i spent some time remembering when all this was france, hence: 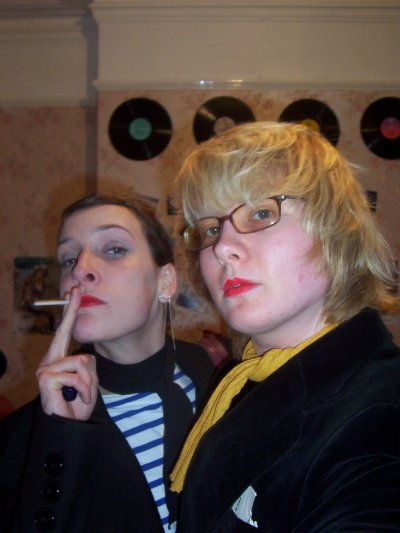 so, good news, good news!
and i thought you kids might appreciate the following picture which i just found in my collection. 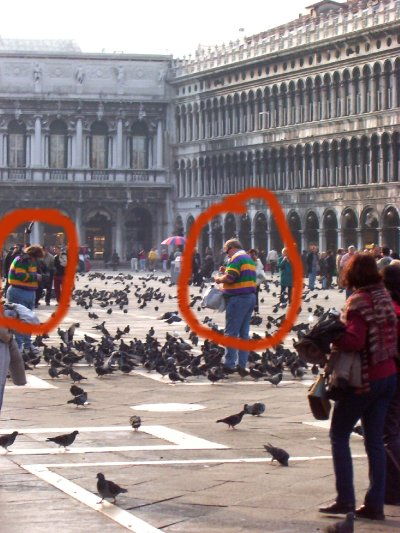 that's it really, i'm going to have to go before i pass out.