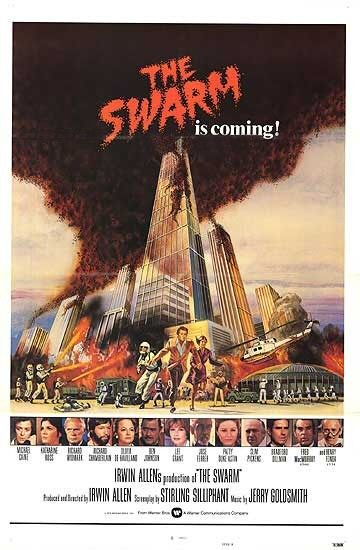 i've just seen 'the swarm' (1978) – thanks suzanne! – and it was absolutely amazing. a bunch of 'africanized' killer bees invade america and blow up a nuclear power plant, and michael caine defeats them by luring them to houston, and then setting houston on fire. a particular highlight was old caine-y's unique technique of SCREAMING all of his lines whilst his face remains ABSOLUTELY STILL. i particularly enjoyed 'inside the swarm', the DVD documentary, which shows the director (irwin allen) screaming at his cast to 'give two thousand percent" whilst they're all being stung to buggery by about three million bees; and also the actors attempting to give some credence to the film's ludicrous plot by desperately maintaining 'it really could happen'. i also particularly enjoyed the less-than-camouflaged racist undertones in the reference to the killer bees as 'the africans', 'those damn africans', 'those killer black africans', etc etc. it just makes so little sense that all i can suggest is that you go and watch it immediately.
some of my favourite lines…
"Are you seeing me…or a bee?"
"Everyone on the base is now dead."
"I…am an entomologist."
"Sunflower seeds are high in potassium, yet low in sodium."
Weve been fighting a losing battle with the insects for 15 years now, but I never thought wed see a confrontation in my lifetime. And I never dreamed it would turn out to be the bees. Theyve always been our friends!"
"But…bees don't have ears."
"The war I've always talked about has finally started."
"I still don't understand this plan at all."
"I always credit my enemy, no matter who he may be, with equal intelligence."
"Are you trying to endow these bees with human motivations?"
"You know what they say…a woman always falls in love with her doctor."
"Is there any provision against an attack by…killer bees?"
"If we firebomb Houston, nothing will grow here for…ten years!"
"My God, Brad, why! Why this one! In the whole damned world, why this boy? My God, Brad. What good is all that science? All that equipment at the base? All those doctors? What good are you!"
"Will history blame me…or the bees?"
"We've gained time. If we're lucky, and we use it, the world…may survive."
"Attention. A swarm of killer bees is heading this way."
"The African killer bee portrayed in this film bears absolutely no relationship to the industrious, hardworking American honeybee to which we are indebted for pollinating vital crops that feed our nation." (titles card at the end of the film)