Follow-up to Lost from The Blog Of Dan

The airdate for Lost in the UK has finally been announced, after almost a year of waiting Channel 4 are showing it. It will be on from the 10th of August, it doesn't make much of a difference to me as I have already seen it and really liked it (as the above entry shows), but I can't wait to witness all the buzz surrounding it and to finally have my friends know what I'm so obsessed with. There's already been an advert in cinemas for it, before War Of The Worlds (good film), which was very odd, so I expect adverts on TV will follow shortly.

So for everyone who hasn't already seen it, you now have no excuse!

A Generator That Generates Random

Refresh to get other quotes, it can be funny occasionally. It's from the webpage above.

In the end I had nothing to worry about, I got 69 overall for the year. My scores ranged from 51 for EC106 (which was strange because I thought the exam went well) to 98 for ST114. The one module I was wondering whether I'd passed was Linear Algebra, but I managed 54 in it.

Last exit last night was a very good event, it was a first visit to the Colleseum for me and I really enjoyed it. It was a shame they ended on a song from Team America, as I thought the film was rubbish.

To finish off the band lists I did last term (here are Volume 1 and Volume 2 ) with big name bands I would say the following are good:
Coldplay, Doves, Elbow, Led Zeppelin, Muse, Pink Floyd, R.E.M, Turin Brakes and U2

Also, recent bands that I have got into to add to the previous lists are:
Opeth – Progressive metal geniuses, a mixture of death metal and acoustic passages with everything in between. Can't wait for the new album in September and to see how they fare of Roadrunner.
Agalloch – Mentioned in another post, similar to Opeth, based more in black metal, but mostly not metal at all.
Screaming Trees – Nineties band, grungy sound with some classic rock leanings. Led by Mark Lanegan, who appears in QOTSA. Good tunes.

This webcam is a recent discovery, it will mean that over the summer if I ever want to see the beautiful campus again I can just go to this site. Was also useful on Monday to see if there was a queue for the union.

I've been up to a few things over the last few weeks, in between all the sleeping and relaxing.

Saw Uncle Vanya at the arts centre the other Saturday, for Carol's birthday. Given that I hardly ever go to the theatre and that it was in Russian (with subtitles) I actually really enjoyed it and was glad I went. Crash was also good, even if The Modern wouldn't usually be a band i'd go to see.

Alton towers last Tuesday was very good fun, in the end it was just me, John and Will but we all had a good time. We took advantage of the 'single riders' queue on Oblivion and got on incredibly quickly, Rita was another matter though as it took us an hour in the queue, but it was a great ride. We also got on the front of Air!

Thursday was the Arthur Vick barbeque, which was well worth going to, we even got a free sack out of it. On Saturday we had a spontaneous barbeque in the evening, we had loads of food and some of it was very posh. There are photos of this in the gallery 'The Final Weeks'. The comedy on Sunday was up to a great standard on the whole, some people thought the main guy went too far sometimes, but I really enjoyed his routine.

Another barbeque took place on Monday for lunch, which was also tasty, but due to the girls being involved in the organisation it didn't start until 4. Yesterday we went into Birmingham for a meal to celebrate Videesha's birthday, photos are up as well (me and Matt did plan to do some shopping, but due to some faffing again ;-) we didn't have time). We have now been to Wagamamas in Birmingham and London!

Results tomorrow, I am getting worried. I'll go to this 'Last Exit' thing tonight, should make me forget about them for a while.

Fun In The Sun

As it was Charlie's birthday today we decided to have a barbeque to celebrate. We couldn't have picked a nicer day for it! It was sunny the whole time we were out there and the temperature was perfect. The food was also very tasty and Matt did brilliantly as the head chef. I found out that lounging about in the sun is actually very tiring and I think the back of my neck is a bit frazzled. I took my camera along, so there are several photos on this blog, try to guess what gallery they are in….

I know someone famous

What you are looking at is the 7" picture disc of the new Audioslave single. The picture with the arrows pointing at it is of a good friend of mine called Jason. He entered the competition to get your photo on the new single and won, the funny thing he isn't really a fan of the band! If anyone wants to see into his strange world and congratulate him then the above link is his blog. Also, here is the actual photo he sent into the competition: 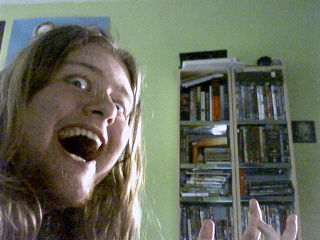 Also, i've added some photos of my own, the ones from Sunday and Monday are now up under the gallery 'After Exams'

I am currently a happy chap as all my exams are now all over (barring any September resits in the worst case scenario). I had my last one on Saturday morning. Analysis on Wednesday was not as bad as I feared it might had been, it was still hard, but I could do a fair amount of it and have no worries about getting the 15% in the exam to pass the module overall. Maybe 40 or 50% for the exam is on the cards. My last exam was Mathematical Programming 1, generally it was a nice paper, a bit different to previous ones and the fact that there seemed to be a mistake in the simplex question didn't help. Overall though MP1 was one of the better modules.

On Saturday after the exams my parents stopped by for a bit (as they were passing nearby), it was nice to see them and I also got a meal out and they paid for a Tesco trip! I saw them in the afternoon and then got together with a few other MORSE people in the evening. I slept most of Sunday but went out to the bar in the evening for a few hours, which was a fun.

In the last few weeks a lot of music that I wanted has been released, so i've spent a fair amount of money. These have been the DVDA version of Deadwing (got it for the great bonus tracks) and another Porcupine Tree album; the reissue of 'Up The Downstair', the Screaming Trees best of, Turin Brakes' new one 'Jack in A Box' and also the new Coldplay should be here tomorrow. I finally signed up to eBay and got 'The Mantle' by Agalloch, which was only a fiver and is very good, a mixture of post rock, black metal and folk! A bit like Opeth in the way there is metal vocals as well as clean singing and noisy parts and quiet parts. All this music has helped keep me sane while doing revision.

The exams may be over but the term isn't. There's lots of birthdays this week, so there will be Top B tonight, a BBQ on Wednesday and a visit to the theatre on Saturday (how cultured!). I'm also trying to convince John to drive up to Alton Towers on Thursday, if he does then that should be a great day. I didn't realise how close it is, it's only 60 miles away. On top of that there may be a trip to London and visit back home for a couple of days.

Well, I've managed to get through the worst of my exams now. I had four in four days, which wasn't very nice.

The first one was probability, on Wednesday, which was pretty tough, but not too bad, I think there's no worries about passing it.

The second was IQE (Economics), on Thursday, which was actually alright. The macro questions were fairly straightforward and the micro ones were the same as in 2003, I could still only do one out of the two micro questions I picked properly though.

Linear Algebra was on Friday, this wasn't very nice, but I knew it would be tough. It could have been worse, I just hope I didn't make a silly mistake anywhere (as long as I didn't make loads I should pass).

Finally there was Games and Decisions on Saturday which was the easiest out of the four. Two very nice questions that I didn't have any trouble with. I should have got them right as Matt (Mr. Genius) got the same answers as me.

Apart from exams I have been watching the end of the 1st season of Lost (a bit dissapointed they didn't reveal much, but still very good) as well getting some more people into it. I saw the start of BB6 on friday, it doesn't look like it will be very good this year, it's mostly full of people with big egos and hardly any personality. Oh well.

Two more exams to go. It's the horror of Analysis II next….

I love it! I think that it's the bee's knees.

But what I have noticed is that there is a sizeable amount of people who more or less hate the whole genre. Several of my friends here at uni. seem to have allergic reaction whenever I mention anything Sci-Fi and automatically dislike something just because it fits into that genre.

Sure, I knew people who weren't fans before I came here, but they at least thought Lord Of The Rings (yes, i'm including fantasy) was OK, or maybe the 1st matrix. But i'm just amazed how some people can have such negative opinions about ALL of it. My conclusion is that they must be evil to think such a thing.

I can't really say why I like it, but I certainly do like it. Personally I'm currently enjoying the final few episodes of Enterprise (the last two seasons have seem big improvements), waiting for the 9th season of SG1 and just getting into the new Battlestar Galactica which is great. I should be going to see Star Wars later, hopefully it will be better that the other 2 prequels. I'm not a massive fan of Star Wars, but i'm looking forward to it.