Or possibly a man in drag. Check out those melons!

So I've been sketching again and then learning how to use Photoshop to colour the blinking things in. I've decided that photoshop is pretty cool, having only just bothered to start using it (trusty Paintshop Pro has always seen me through!).

Other than drawing that I've been sleeping a fair bit more, watching London claim the olympics from the over confident french (Tabloid headlines tommorow speculation? 'Oohlympics la la' ? 'England Much Better Than France – Poll Proves' ? ), prepping my oh so star spangled CV for the job offers to just come flooding in and I did a little concert called Live 8.

Live 8 had lots of good moments. The hillarity of me forgetting a jumper and freezing me nuts off, the further hillarity of me scoffing a £4 amusement park quality baguette and then feeling queasy for the rest of the evening and also there was a giant spinning camera, which I now demand be installed on the roof of any house I live in; just so I can play with it.

I think most people have covered the music of the Hyde Park gig. I was most impressed/suprised by Razorlight, they played a good live set in front of a gianormous crowd and did it with energy and style. I am now most interested in hearing more of the music of Youssou N'Dour as he had by far the most interesting and magnetic voice.

There were other things that amused me; the big screens being out of synch with the sound, making most attempts to organise clap/click alongs doomed to failure as people went with either the sound or the screen. The increasing hyperbole directed at the concerts themselves and towards the powers possed by Bob Geldof. An alien visiting the concert would think that Bob Geldof could, at the very least, fly through the air and breathe fire. The booing that France (on the big screens) and Mariah Carey recieved from some sections of the crowd showed that not everybody was in the spirit of universal love.

I'd also like to give a shout out to my Iron Bladder which held out for the entire length of the gig and the queing/travel time to get there and back. You truly are a marvel of modern medicine; either that or you are going to kill me. 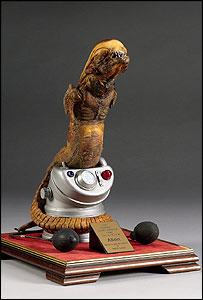