Everyone I like should read Transmetroplitan. The fort recieved a visit the other day from the mighty Colin and he brought with him/dredged from Sam's effluent pits, several tomes of this mighty comic. Featuring the burning rage of Spider Jerusalem, the man who doesn't fear the truth and a post apocolypitic futurist city that bears unmistakable resonances with our world today. Witty, touching and groin-punchingly brutal in its honest examination of the conditions and experience of mankind.

Its good in all the right ways

In other news, it appears that we will soon be getting proper graduate logins and will be able to check out all those secret entries that people don't want the world to see. Personally, I haven't noticed that much change without being able to see them but its nice to feel all included.

Fort Awesome undergoes further changes in the upcoming week as we are building a proper bar out of real wood and everything. 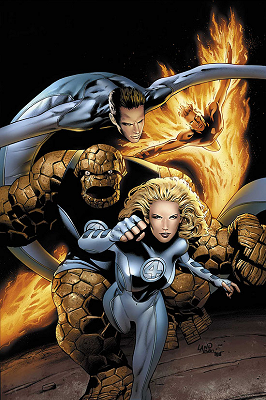 Went to watch the Fantastic Four Movie a couple of weeks ago and enjoyed it well enough. The Fantastic Four were never going to make for a movie with any real darkness. Always designed as the 'first family' of Marvel Comics their story is that of being a sugary sweet group of millionaires bent on saving the world and all things cute, while smiling for the press.

The geek tribe is currently bathing in a giant, luxuriant, milk bath of comic book tie in movies – from Batman through Elecktra to Sin City, all types of comic book licenses are being mined by Hollywood as fantastic cash making forumlas. These same licenses are then filtering down into the games market with a barbarian host of titles troubling the shelves at Game - mostly terrible. There are other signs too, of what amounts to a 'geekification' of current modern culture. Witness Neighbour's Lou playing Dungeons and Dragons. Witness too the transformation of geek character Seth (in popular teen drama The OC) to a modern sex symbol. I can see why a superhero character like Batman or Spiderman could easily become many a girls fantasy, and like spiritual fathers, these super hero's may have bestowed their mystique on those among us who speak geek.

The media geek, is the acceptable face of geekdom, he is the geek for the 22nd Century. Wacky like Jonny Depp, and with the same smooth skin and faultless smile, this new breed of geek may speak of hit points and wear glasses, but dress him up in a suit and he's ready to walk down a catwalk. This new breed of geek is careful never to tread too close to the edge of dark geekery. Furries – your time has not yet come.

So now, as with all trends, must surely come the backlash. As the pace of comic inspired output in Hollywood reaches fever pitch, there will surely rise and rise the dissenting voice who wonders if we shouldn't all just head outside, get some fresh air and play sports.