All entries for Friday 18 September 2009

Sorry for the late entry..I've been taking some time to figure out the functions of this blog. Anyway, forgive me if I don't correctly describe all the menu items that we had...we didn't get a copy of the menu. I just wanted to show you all the stuff that you can get for lunch at Gordon Ramsay's. This is his original flagship restaurant at the Royal Hospital Road in Chelsea. It has 3 michelin stars.

We had the menu of the day which is 45 pounds per person, not inclusive of taxes I believe. I wouldn't know, I wasn't the one paying. The maitre'd gives the price list only to the Host. Which was quite hilarious actually, because I kept turning the menu over and over, wondering where the prices were, when actually only the Host gets a copy of the menu with the prices listed. 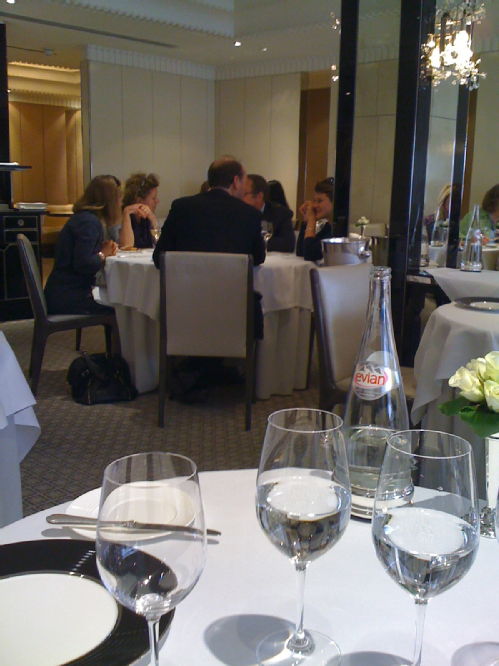 As you can see, this is the interior of the restaurant. It's pretty...if you ever get the chance to go there, tell me whether it reminds you of an "ideal weddings" kind of coffee book. Cos it sure does, to me at least. The dining room has nice cream coloured walls, and there are bunches of white roses arranged differently on every single table. There are very few tables, so reservations are definitely required. 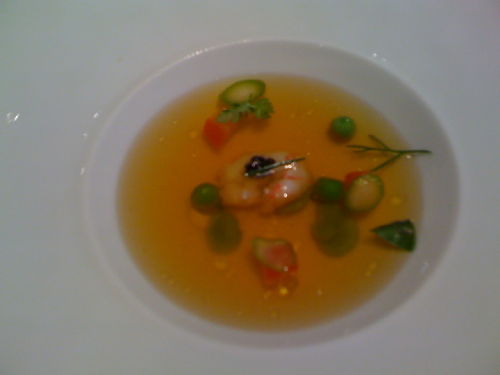 The soup- clear soup with asparagus and shrimp. I can't remember if this was an amuse bouche or not...well but it was refreshing, had a nice clean aftertaste. This was my 2nd course: the iberico ham with potato, olives, and drizzled with quail's egg. This was delicious. I have had very nice iberian ham, which is slightly different I believe, but this was very tasty. The potato mash was substantial and made me feel quite full (whilst only on the 2nd course)! 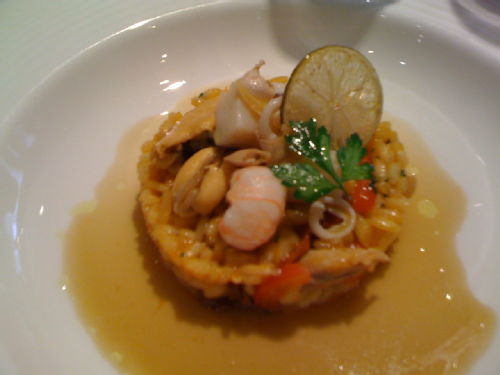 My dining partner had the seafood risotto with clams, squid and prawns. Whilst I do not pretend to be an expert with risotto, to me this dish seemed really nice...it was quite refined, there was the usual smell of cheese but overall it really was very well executed. 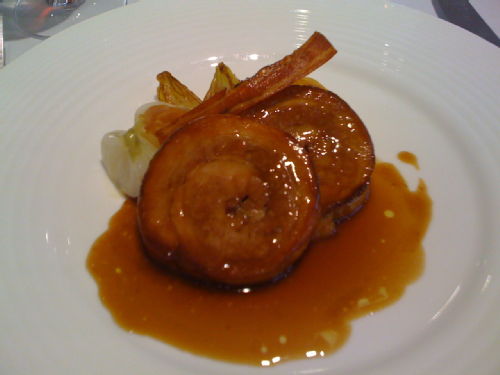 This was my main, the pork dish, with plum sauce and apples on the side. The pork was quite fatty, which made it taste good. I have tried very good pork dishes before, and this certainly ranks as one of them. 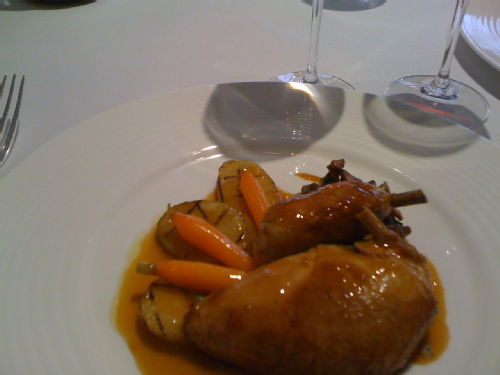 My dining partner had the chicken breast meat for his main, done French provencal style I believe. It was nice too, I had a bite, but he said it wasn't as good as mine. Hmm, I suppose it depends on which meat you like better. Though I tend to agree with him...but just a wee bit. Because both were pretty much up there, if you know what I mean. 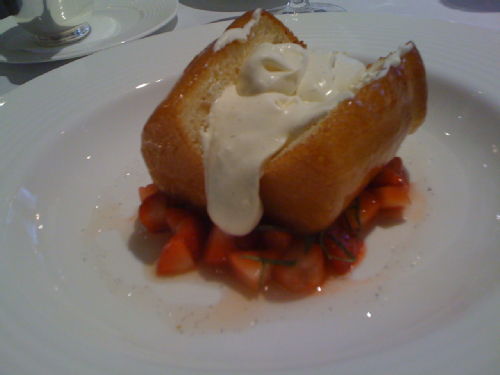 Oh glorious Rum Baba! I've been having dreams about this dessert ever since I had it here. Again, it's probably not THE best dessert I have ever had, but it does rank in my pantheon of best desserts. It was fantastic. The wait staff highly recomended this dessert to us as Gordon Ramsay's specialty. I can see why. I think I might find good pork dishes, nice soups, etc elsewhere, but a Rum Baba like this?? Perhaps never. Sigh. The Rum Baba is a sort of brioche-like sponge cake, that's drizzled with as much rum as you like (you control the amount, they give you a small serving of rum), and comes with vanilla cream and strawberries. I am not much of a chocolate fanatic, though I do like chocolate and can appreciate it, but I am a total nut over vanilla cream/vanilla sauce and what-have-you. Naturally I gravitate toward desserts like this. And I can tell you it was great. 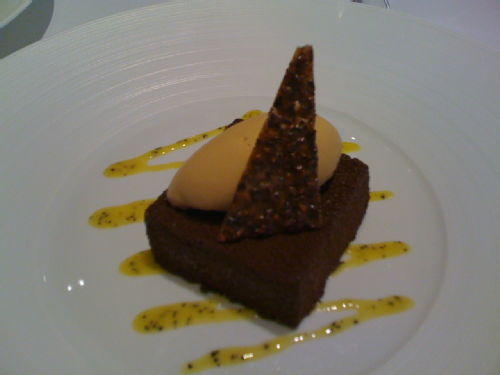 My companion had the chocolate cake. I have tried similar tasting cakes before, so it's not like Gordon Ramsay's chef is the only one who can do desserts of this quality, but yes overall it was quite exquisitely done, again, a high sense of refinement evident in the dessert. And what made it nice was the salty caramel ice cream and sauce that came with it. I am a sucker for salty caramel macarons, so of course this tasted pretty good to me. But, it's still the Rum Baba for me. 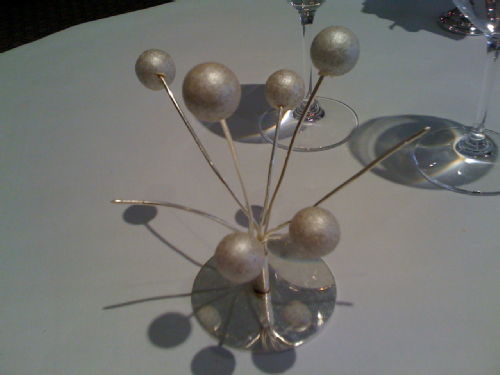 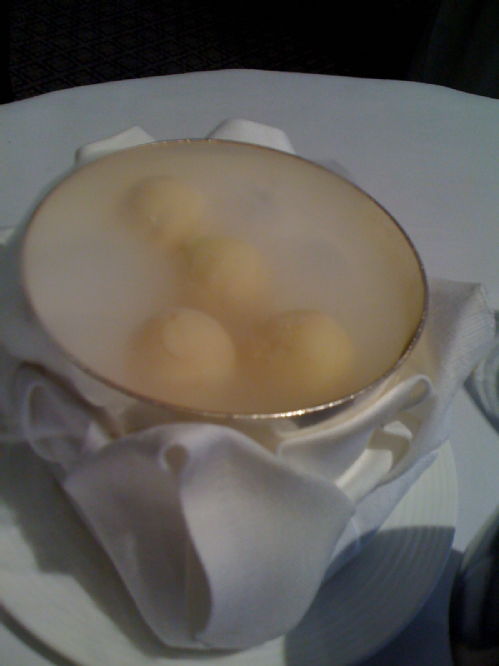 I hear that they serve these sort of ice cream balls at The Fat Duck too. I read internet comments- some detractors say that they're not sure whose idea it was in the first place. But I was happy to have Gordon Ramsay's version of ice cream balls! Basically, they come served up to you in dry ice...and they're covered in white chocolate, and they're actually strawberry ice cream inside, and you pop them in your mouth, and it just bursts into sweetness. Very nice!

Replete with all that good food, we settled down for a nice cuppa tea apiece. 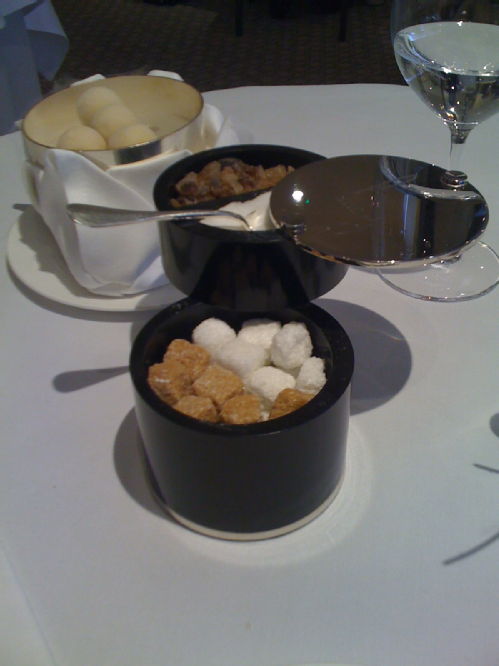 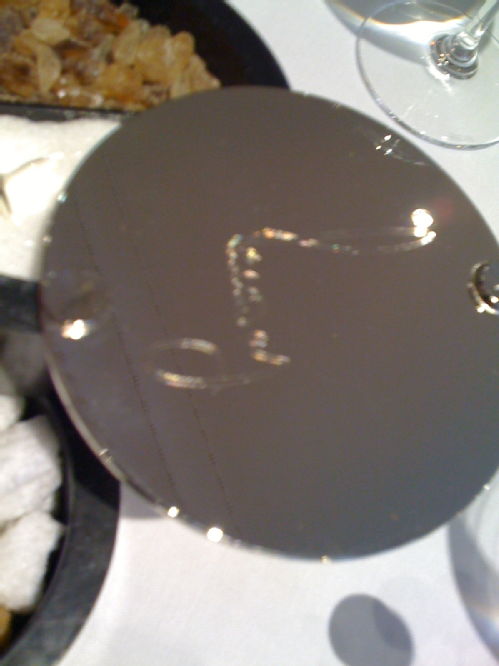