Graduates in Small Businesses - What do they do?

All entries for October 2012

Universities and Employability: The power of PR

Over the past few weeks in my literature search the notions of university engagement with employability and the importance of PR and marketing in recruitment cropped up here and there (specifically in this 2002 esru report by Purcell et al).

Just today I noticed a poster which nicely illustrated how universities can combine PR with graduate employability. 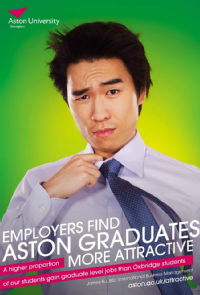 It's part of a campaign by Aston University to show that their graduates are attractive to employers. This campaign is interesting in several respects.

Firstly, it is an example of how some universities, competing for students who are in turn selecting HEIs on the basis of the return (salaries) on their investment (£9000 per year in tuition costs and additional living expenses*), respond to the current HE and labour market climate. Secondly, it is also an example of how universities are justifying the costs of HE to potential students and to their families, tapping into the ‘successful graduate job’ mantra. And thirdly, it is especially interesting from the perspective of gender representation in media and advertising.

One of the aspects of the poster which struck me in the thirty seconds of a train stop at Banbury station was the depiction of a male graduate as parody of a model photoshoot, as well as a slight association with Fructis, a (popular?) hair product in the 1990s. In an advertising culture saturated with suggestive images, mostly of women, it is refreshing to see such explicit parodies. To use analytical jargon, it’s a bit lol.

Upon further googling I found a few more posters: The juxtaposition of these images of graduate employees in professional jobs (suggested by the shirt and tie attire) with 'attractive' for employers in the context of parodies of adverts with suggestive sexual imagery (hot under the collar, suggestive eyebrow, obvious wind machine etc) implies that while sex sells, lol also sells.

These posters are in vogue with the current age of parody on the Internet, evident in memes and viral content, encouraged by the ease with which texts (in the broadest sense, including images, sound etc) can be cut up and repackaged to create new meanings.

Finally, using parody for photos of male and female graduates as part of the campaign is definitely a step towards equality in media representations of gender, at least in some sense of the term.

*Yes, it isn't paid upfront, and yes, the story is a bit more complicated.