This week we spent a few days in Lahore to meet the Territorial Commander and the Chief Secretary of the Salvation Army in Pakistan, so we had some time in between to do a little sightseeing around Lahore.
First off, I made a special trip to the Lahore Central Railway Station. I might not be a trainspotter, but it is interesting to see the railways in another country. Most of the railways here are broad guage 5'6" (not Brunel's 7') instead of the British Standard Guage 4'8 1/2". Enough of the technobabble, the photo below shows the Shalimar Express that goes all the way to Karachi, and another train in the background. They all seem to be about 14 to 16 carriages, which makes for a very long station!

We also took the opportunity to visit the only border crossing with India, where a bizaar ceremony takes place every night half an hour before dusk. It involves specially chosen rangers, in full dress uniform, from each side, yelling (the parade sargeant and the crowds), locals flag waving, rangers parading up and down the road, flinging the border gates open and shut, exchanging the day's national newspapers, shaking hands, playing the last post and lowering the national flags on either side of the gate, letting them cross over (as in the photo) before they are folded away and stored for the night. 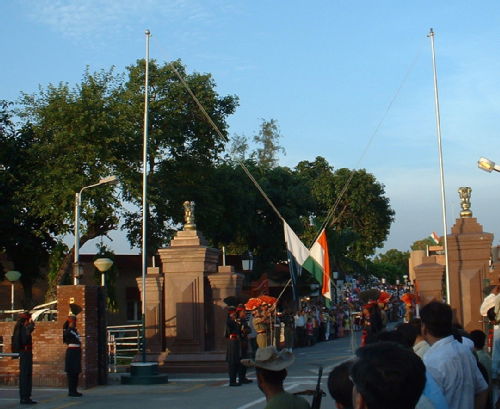 The ceremony is both comedic and poignant, considering the history of conflict between the 2 countries. Still, at least I can now say 'I have seen India'.
More updates on our activities will follow, as soon as I have something to report on, like when we finally get to distribute food to the people in need. At the moment, the road is open, but the people can't get down to Balakot to pick up the stuff even if we took it there – typical.