Lesson 2 – Back into circuit flying

Well lesson 2 and back into circuit flying. Got a strong sense of deja vue having done x lessons 3 years ago. But nothing really useful came back..

Did some work on the radio this time, ok but a lot of variations from the script so was soon lost...

Circuit was ok - landings were much easier than previously remembered but had a worrying tendancy to fly a bIt low.

Flying – Things to do

Had my first lesson yesterday at Almat flying school Bagington.

As usual was quite nervous, but instructor Ken really nice and friendly which helps!. Quick briefing session,, when I realised I had forgotten the checks procedures and then off we went.

Plane was a little CESSNA 152 and after climbing in, it all did seem vaguely familiar. (Thanks to Rachel who let me sit in the Cessna last week - it helped)

Taxying again did seem relatively easy- going across grass was new though. Managed to keep roughly to the yellow line

Ken did the radio and power checks then lined up on the runway. He did the rudder and i did the control column as we took of at 70kts - a great feeling. Once in the air did the climbing, turning and trimming revision exercises which went okay. Still not 100% accurate with trimming though. Then did some more practice with turning, talked through the FREDA checks etc

After about 30 mins started to feel really sick - problem as plane has no sick bags,, but manged to keep it all in.

Returned to airfield via Draycot water,,, and I approached the runway (a little hesitently) we came in too land. Touchdown was ok - but I think the approach was a bit erratic

All in all a good lesson and looking forward to next week. 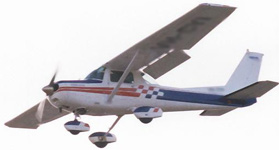 Hi have just booked my first lesson at ALMAT flying club for 10.00 am Sunday 17th August. Really excited can’t wait to get up into the air!

Well tomorrow is the big day. Going to Long Marston Airfield to explore option of Microlighting and then going to go to ALMAT flying club at Coventry Airport

To be honest at the moment I’m definately leaning towards light aircraft especially if I can learn in a CESSNA 150 or 152.

But both options are worth exploring

Well after a forced break of over 3 years while I get back on my feet after divorce etc etc. Finally decide its time to fly!!

Previous flying ~ 15 hours on Cessna 152, loved it despite lots of stress. However now £145/hr plus landing fees, fuel surchage etc etc, exams and need 45 hours… When I get my licence will buy share or hire a plane.

Alternative… Fixed wing microlights, 95/hr only 5 exams and only 25 hours. But will probably have to buy a plane , its possible to hire but rare, then will have associated hangarage costs and maintenance

Am going to go exploring on Sunday to talk to some experts!

Still doing exercise 12/13 will I EVER move on from circuits.

Flying conditions
350 deg wind at 12 kts – runway in use 05 hence crosswind component of wind – at maximum strenght. Right hand circuits were the order of the day.

Tried crabbed approach but I was not timing the kick straight accurately. If you leave it too late you will veer of the runway. If you do it too early (which I think I was doing) you will the wind will catch you and you will still not be straight on landing.

To make the landing more accurate we tried a combination landing which is the combination of a crabbed approach but a wing down landing.

According to the book ….

I.e wind is coming from left – left wing down.On landing you continue to turn the aileron into the wind

Todays lesson was a “formal” session on crosswind circuits. I have had a go at crosswinds circuits before (lesson 14) with mixed success.

In addition to notes from lesson ? when doing a touch and go – after landing the ailerons should immediately be turned into wind

I must admit I felt reasonably proud of myself today. There was a lot going on but a managed to I hold it all together. For a start its a lot different doing right hand circuits – the view of the runway (or lack of it) is completely different. Also you do get used to the familiar landmarks – (I felt lost without my familiar chimmney on the crosswind leg to aim for) My landing were reasonably good although I was relying on the instructor a bit too talk me down – ie left to my own judgement I proabably would have flared a little too early. But no bad landing and approach was much better. (Also managed to keep height steady on circuits)

Another good day for circuits. Good visibility with cloudbase well above circuit level. With a wind strength of 13 kts anddirection 240 deg, there was only a small crosswind component ~ 2 kts.

Did 4 circuits in all – very pleased with landings and my approach to runway was much better. Got the climbing and descending nailed at 70kts. Also did the radio myself this time.

However I have developed a tendancy to climb during the downwind leg. I think this is due to the fact that I have not trimming correctly. During the take off climb I am trimming too much nose up and then after levelling out on crosswind leg not correcting the trim enough. Hence trim still set for nose up and therefore I drift upwards. (Tip: very rarely need more than 1 turn of wheel in either direction)