Marie-Jeanne Merillet, a Masters student in the Centre for Cultural Policy Studies, University of Warwick, writes about 'All Roads Lead to Coventry': an event initiated by Warwick Creative Exchange, and co-organised with Warwick Arts Centre and Coventry Artspace, to explore how arts and culture can help to re-shape the city for its citizens and visitors. It took place on 16th September.

The day started out with a series of walks through the City, the goal of which was to generate discussion around art and culture and how this aspect could be used strategically in the future to make the city a more engaging environment. Essentially each of the walks aimed to bring together academics, creatives, and council staff. I joined one such group in a walk which began at Daimler road, winded down the canal way, and from there to the EGO performance space where the afternoon discussions took place. It was a surprising walk in the sense of discovery. Having spent an entire year living in Coventry, while studying a Masters at the Centre for Cultural Policy studies, I realized as the day progressed how little I really know about the city and how rich it is in terms of history and culture. In the course of our morning’s walk we wandered through the Cash buildings, 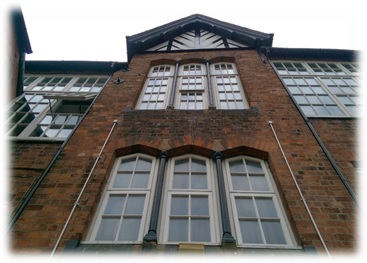 up Foleshill, to Tower Court, once home to a thriving car industry. Next we descended an obscure flight of stairs to explore Coventry’s waterway heading in the direction of the canal basin, yet another dimension of the city I am completely unfamiliar with. 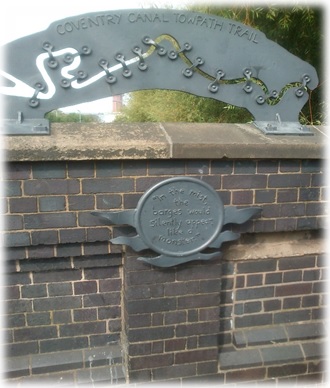 (In the mist the barges would suddenly appear like a monster)

At the end point, we were met by Alan Dyer, artist and Director of the Canal Basin Trust, who took us on a tour of the artists’ studios. Alan explained that the building was carefully restored in the 1970s, to look like the original, and that initially they invited their third year students to come and work there, filling it up with graduates. It has since remained a creative hub of artistic industry. We climbed down tiny staircases and through low doorways. Apparently the warehouse has its own ghost, believed to be a canal worker who plummeted to his death from the top of the staircase. The warehouse at present boasts some free studios and work spaces for creatives. There is some question about efficiently latching on and using spaces already in existence in the city instead of trying to carve out new ones elsewhere. As intended, the results of the walk left us with many ideas and perceptions about Coventry, which left us well prepared for the afternoon’s activity.

Grouped around tables of ten at the EGO performance center, the second part of the day revolved around discussing Coventry. Themes discussed included nostalgia for the past, a sense of pride in history, and also the role of universities in the shaping of the city. One of the issues that arose was that students do not often engage with the city, many do not even realize that the University of Warwick is in fact in Coventry. Having met many students during my studies at Warwick, I know that the majority I spoke with had a very negative impression about Coventry, an impression that could be remedied if they were encouraged to get to know the city better, and have some sense of its cultural richness. Some of the conclusions reached highlighted the universities as being instrumental in shaping students’ perception of the city. This year for example I took part in the Dominos project as part of the Coventry Mysteries Festival, which was a wonderful experience to engage both with the city and its culture. Perhaps raising students’ awareness and interest in the cultural history of the city could have a long-term positive effect on their involvement in the community and could be seen as a strategy in itself.