So I thought i'd celebrate this random moment with a blog. and a picture, of course.

learning grid. ideal for leaning one would think. yes, it is pretty good here. I concentrate, I get work done and only minimal procrastination. I have a few gripes though

1) ringtones. I must admit to being guilty of this one once, but usually my phone's on silent because I know nobody really wants to hear swim by in flames (as awesome as the song it) played on crappy mobile speakers. irritating jingly ringtones are worse. grr.

2) people who speak louder when they're on the phone. mobiles are good. you don't need to shout. if you find you do have to shout, leave the grid. It's just polite. And as for reading out your credit card details, address and everything in a loud voice, well that's just plain dumb. I hope that girl gets her identity stolen!

3) the coffee's too expensive here. Though it is very very yummy.

4) i can't find the copy of the quantum text book that first got me to the grid. Either it's the most popular book in the world or someone's pinched it. I'm assuming the latter. Not a happy cat.

other than that, I like it here. I think you have to get here stupidly early to get a good spot, but tis nice when you do. I'm currently occuping 2 spaces to save a bit for gav who has gone to meet someone more interesting than me.

LOOK WHAT I GOT!

I have just been speaking to Dr. Janette Dunn and our Admissions Tutor, Professor Bryan Gallagher, and they have asked me to enquire whether you would like us to issue you an offer (conditional on you obtaining a 2(i) or higher in your Finals) to work with Dr. Dunn on a PhD project on vibronic coupling in fullerenes. If you would like this offer to be issued, I will set the wheels in motion and it will appear on your online application page in around a week. You are still welcome to visit and discuss research with Dr. Dunn if you would like.

Conversely, if you would like to visit to see other research areas/projects first, before the issue of any offer, please let me know. However, Dr. Dunn is willing to offer you a place now if you would like.

am happy Cat _ No interview, just an offer. Squee is the word. It's not just from the strength of my appication though. I've met Dr Dunn before (at postgraduate open day) and discussed possible research with her. My current project supervisor also acts as an external marker for her, because he researches the same stuff, so a good reference from him must have really counted in my favour.

Now I just need Rich to be offered a place and we're all sorted! I'm really hyper!

This has been a really good day
1) I got to play with my bike and my new socket set. Man, that thing's the most useful christmas present ever! I've used almost every type of tool in it in 1 day! Bike battery is charging up in claycroft as I type and cat will be back on the bike tomorrow!

2) MPs have sense and have voted in favour of a blanket smoking ban. margin of 200 too. excellent. no longer will my freedom to choose not to inhale cigarette smoke be impinged upon by freedom hating smokers. (I don't hate smokers, i just think it's a bit rich that they argue against a ban by "freedom of choice" arguments)

3) Pink Spider and A Day Remains went through in battle of the bands. Don't know who was first and who was second (I wouldn't like to choose between them) but at least the best 2 bands went through.

attempting a trackback…. hope it works. (should trackback to Gav aswell, but as everyone in the university seems to read his blog, I don't think I need to)

yeah, good assessment of the situation. stupid bloody pedestrians. I figured I'd add my own rant, as I started commenting and it became an essay rather rapidly.

Slow walkers: as long as they're not in groups of a million, I don't really care. I often make dissatisfied noises from behind if I can't get past. Saying "excuse me" in that tone that says "I'm in a hurry and you're blocking my way. What do you think you're doing?", then barging past works well I find. But still, slow walkers shouldn't be out at beginning of lecture time. It's just annoying.

Corridor blockers: GAH! I have been guilty of running into people on the stairs by kaleidoscope (cafe library my arse) and blocking the path for a few seconds; but it doesn't take long to step aside and create person-flow space. Why do people not manage this? I blame first years. No respect.

Large groups of people blocking paths: The worst one for this is the path across the field outside maths. It's wide enough for 2 people and that's it. Plus, mud on either side. [1] So obviously it's fine to walk along here 2-abreast and not move out of the way when you see 2 people coming towards you who have moved to single file. Why, they must be going into single file to allow you to stay alongside each other. Obviously. No dumbass, it's because that's a stupid narrow path! grrrrrr

Actually, I have a good tactic for these people. When I'm on the bike (it's a bit too cold to be fun at the moment) I often go to lectures in bike gear. The jacket has armour in elbows and shoulders. mmmmm. So, see large group of people failing to get out of my way, eyes ahead, brace and BAM! Inconsiderate wanker gets a bruise. mwa ha ha. Evil? Maybe; but I love it.

The one that pisses me off the most. The people for whom I have no time. The group that causes me the most anger and gives me ulcers:
People Who Stop Walking For No Reason And Just Stand There. I know we've all had those moments when we realise we've left our hat on a seat in L4, or that knot theory is in Ramphal, not Humanities. In these cases, a quick exclamation and a turn around is allowed. It's when people just stop and stand there, seemingly for no reason, that my blood boils. Why do they do it? It's like the gears in their head that tell them to walk forward (albeit slowly usually. Guilty of one crime often means guilty of another) just stop working? Or are they receiving commands from a higher place? I don't know; but I wish they'd stop doing it!

[1] They should have built it a bit wider really. There isn't really any reason for it to be so narrow. 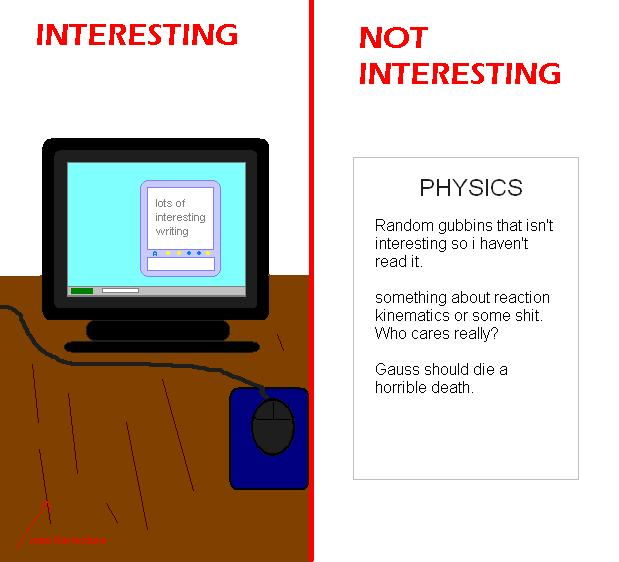