Alias Finale: My Understanding of Rambaldi.

Wow. 5 Years of Alias and it's all over. I loved the finale and thought the deaths were all very well thought out and the demise of Slone IMO was perfect and fitting. Now immediately after the finale my initial thoughts were, what on Earth just happened there? That didn't really explain anything. However for me Alias has always been a show that required the viewer to sometimes fill in the blanks. Here is my interpretation of the Rambaldi influence over the past 5 years.

NB. This is mainly for me so I don't forget my own theory, but if anyone else has anything to add feel free!

Possibly the most important question as for me really decides how the rest of the analogy fits into place. Was Rambaldi a man who wanted to destroy the world, did he want to save the world or what were his plans all together?

Yes he had visions of the future and could predict events hundreds of years before they would come true, but what did this really mean in terms of his inventions. On one hand he invented some pure killing machines (Firebomb – S2) and on the other hand he invented some pure healing potions (The Healing Liquid – S2?) and then finally some devices that could have mixed reactions (The Water Supply – S4).
What was he up to????

In my opinion Rambaldi saw the world as 'dying' as early as the period he was supposedly around in. At the time people had no faith in science, yet he was drawing diagrams for mobile phones in the 1500's. Not only did he see technology in the future, but he saw corruption. He saw that Earth was going to be slowly more and more corrupt with wars, infighting and deceit and he saw himself as the 'saviour' and the one that could change the future. 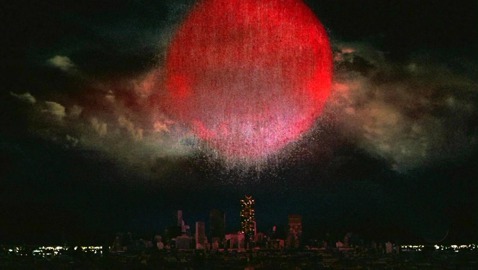 In my opinion, Rambaldi wanted to "cleanse" the world and almost start afresh, much like the flood in the Bible. Only a chosen select few would survive who would then go on to perhaps create a "utopian" world. As the events of Season 4 played out, the water supply was tainted with the special chemical that when (what will be referred to as now as) "The Big Red Ball" was in close enough proximity, turned individuals against each other eventually until they died. Now the key factor in this plan was that it has to effect the world. Elana needed the sat uplink to broadcast the balls signal worldwide to create this effect and this is just one of the many reasons that Rambaldi himself could not create the effects of which he dreamed. Quite simply the technology wasn't there for him to fully implement his plans.

Anyhow, It was my believe that "The Flood" was the beginning of the end and the start to what everyone keeps referring to as "Rambaldi's Endgame"

So What was the end of Season 5 all about then? Immortality? Certainly seems that way. However why did Slone beat that guy up in Season 4 when he told him he was seeking it? Maybe because he truly believed he was the only one who deserved it? Maybe he just didn't like hearing anyone else speak of it as he has dedicated so much of his life to finding it? Maybe he knew Rambaldis ultimate plan was more than just immortality? Who knows, maybe it was just an inconsistency. Either way it appears Rambaldi found essentially "The Holy Grail" of eternal life. It is in my opinion that he saw this as so sacred that only a couple of people in the whole world could be trusted with such a responsibility…......."The Passenger" and "The Chosen One"

Okay no real explanation on this one but as I see it…..the Horizon was an addition to the Sphere of Life. Essentially the Sphere of Life was contained within the "outer shell" that was the Horizon. This would explain why the box the Horizon originally came in was flat and we were told "required construction".

Hang on wasn't "The Prophecy" disproven in S1? I originally wrote a brief outline to what I thought it all meant, then found someone on the internet who phrased it even better!.....

Ramabldi's prophecy stated…
"This woman here depicted will possess unseen marks. Signs that she will be the one to bring forth my works. Bind them with fury, a burning anger unless prevented at vulgar cost this woman will render the greatest power unto utter desolation. This woman, without pretense, will have had her effect, never having seen the beauty of my sky behind Mt. Subasio. Perhaps a single glance would have quelled her fire."

So here is what we can conclude:

This woman here depicted will possess unseen marks: We know Sydney had the genetic characteristics Rambaldi said she would.

Signs that she will be the one to bring forth my works: She is responsible for the recovery of a large majority of Rambaldi's artifacts.

Bind them with fury: In the end, Sydney was the ultimate connection between everything Rambaldi. "The chosen one", "the passager", and "the greatest power" all played a vital part in her life, and she could not have been more resentful of that fact.

a burning anger : Sydney always hated Rambaldi and the fact that everything in her life was supposedly preordained. After Sloane shot Jack, Sydney had reached her breaking point. She was going to make her mother pay for the destruction she had caused and stop anything Rambaldi from causing more .

unless prevented at vulgar cost: Vulgar cost would have meant Sydney was killed and Irina suceeded in blowing up D.C. and London. If this had happened then the global genocide Sark predicted would have surely occured.

this woman will render the greatest power unto utter desolation : With the satalites down, the warheads set, and the horizon and immortality at the ready Irina had gained ultimate power. Sydney fought against her and in doing so helped to bring about Irina's destruction.

This woman, without pretense, will have had her effect: Sydney was never deceptive about her feelings toward Rambaldi and in the end Irina knew Sydney was there to kill her.

never having seen the beauty of my sky behind Mt. Subasio. Perhaps a single glance would have quelled her fire: Sloane knocked Sydney out before she could see what was occuring in Mt. Subasio, which I'm guessing showed the secret of eternal life. If Sydney had witnessed what Sloane did it is very possbile that the power of such a secret could have corrupted her hatred for anything Rambaldi.

This couldn't have been what Rambaldi wanted right?

Now this is all pure speculation. IMO Rambaldi wanted to cleanse the world via the Flood. After which he chose the two people with "the purest hearts and intentions" (Passenger/Chosen One) to discover the power of immortality and go onto to create a new world. A better world. A world where aggression was slowly bred out of the population with the same water supply that was used as Evil in S4. However of all the variables he still couldn't predict what they would actually do.

Therefore IMO "The Chosen One" had two choices, she could destroy the amulet and no one would ever find the secret as it was too good for anyone else (render the greatest power unto utter desolation….) OR by looking into it (and seeing the sky), this fury would be quelled and she would essentially "see the light". Maybe it turns you even more obsessed?

Unfortunately Slone got there first and ruined that idea.

So what did Slone and Irina want, and WTF was up with those missiles

IMO Slone knew of Rambaldi's great plan and despite his obsession, he was led by power, exactly the same as Irina is. His plan was to become immortal, launch the rockets at London/America and then make billions using Profit 5's resources. Slone and Irina both wanted power, nothing more nothing less. They didn't want to wipe out the world. They believed in Rambaldi, but maybe that was just a step too far? I mean two cities against that of the world? Either way they were evil evil people who got what they ultimately deserved. They both craved power, riches and eternal life and look where it got them.

On that note, I always believed Irina was a nasty piece of work who would manipulate the audience, her family and anyone else who would get in her way to further her agenda. She genuinely did love her daughter, just when it came to the crunch…Power/Family she chose wrongly.

Yes…......supposedly they were to fight over something of great importance….IMO not really well handled but they fought over "The Flood" and ultimately Nadia died. Not perfect but it did come true.

Well there it is. 5 Years of my favourite TV show. You will be missed Sydney!