Shame I missed him

I thought I'd try one of these reveiw type thingys, as I don't have much else better to blog about. I don't think I'll be much good at reviewing though, I will probably struggle to strike the fine line between just saying something useless and telling the whole plot, luckily I've chosen to review a DVD which would be very difficult to give the plot away to as it's not that kind of DVD. Anyway I'm rambling, on with the review.

I bought this DVD yesterday, I was wandering round HMV looking for stuff to waste my money on and I saw this beauty for only £5.99 and had to buy it, god's hand was forcing me. I have been a fan of Dave Gorman ever since I first saw his TV show The Dave Gorman Collection back in 2001 where he went round the world trying to meet his namesakes.

His googlewhack adventure is a recording of one (in Swansea I believe) of the live shows that he did around the country, including the, world famous, Warwick Arts Centre last year. It's about his quest to seek out people who were googlewhacks, that is the people who's websites are the result of a Googlewhack, not those who's name is a googlewhack, you'd have to have such a strange name for it to be a googlewhack.

The show itself takes you through his journey and its ups and downs, all presented in his very comical manner on stage with nothing more then a slide show in which he shows pointless graphs and charts and pictures of the places he went and and the people he met along the way. It's very much in the same style as The Dave Gorman Collection and anyone who enjoyed that should very much enjoy this.

The DVD itself is also fairly decent; it has cool menu's which are more then just a menu, they are comedy within themselves. There are also a few extras on the DVD, one of out takes from the show and also one which has a pop video that was made by the maker of www.b3ta.com and contains silly graphics (see below) and a very catchy song to go with it. 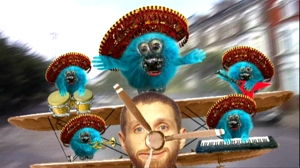 The only thing that I did find slightly annoying about the way he presented the show was that he seemed a little viloent, I realise it was just to emphasize his points but it just seemed a little over the top and spoilt it a little and hence it's only getting 4 stars, but overall I'm really glad I purchased it and I am even more gutted now to have missed out on seeing him at the Arts Centre although I did see him at Top Banana afterwards riding the Bucking Bronco.

It's a terrible photo and could be anyone, but it is indeed him, he made an appearance after his show, and donated two free tickets to the following nights show to be auctioned at Top B. 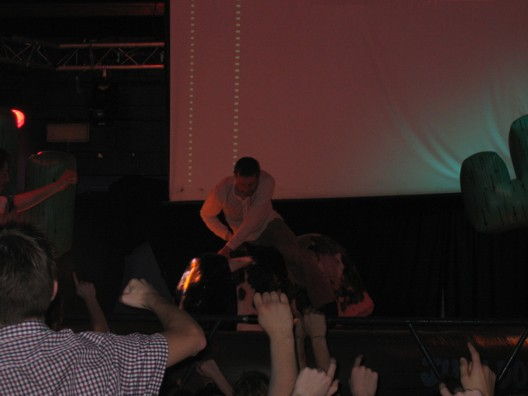