My blog is down!

At least until after exams nothing will appear here bar this message and anything important. So probably nothing else.

I can be MSN'd at spockstension at hotmail dot com. Add me, random people, and learn what it is to type to a man on the edge.

Blacker Soul poems now retail 27 pence each at auction, but private sales can be arranged.

With Our Compliments
—-
The Management

Everyone was doing it… I just wanted to be popular

Total Volume of music on my computer
10 Gig. That's excluding my CDs, and random scattered music, stuff on my MP3 player I got off ppl and haven't downloaded, files Winamp throws a fit over, and files I haven't sorted yet.

The last CD I bought was
Probably Jordan Rudess' Rythm of Time… although I have to say I'm not certain. I got Transatlantic's SMPTE probably before that rather than after, and I do now want a copy of Kino's album Picture but I'm too lazy and cheap to get it right now.

Five songs I listen to a lot or that mean a lot to me
Feck, only FIVE? Okay..

2. Heaven Knows – Squeeze / Wonderful Tonight – Eric Clapton
This sort of defeats the point of this excercise but these are two songs that hold nothing but memories for me… so it's not the music but the meaning of them that's important here. Both make me cry and I have a hard time listening to them – both for very different reasons… but, as all good things, it's to do with girls. Long stories.

…seriously though, Porcupine Tree take up a fair wedge of my listening time, I just can't pick one… Baby Dream in Cellophane, Stranger by the Minute, .3, Sound of Musak, Gravity Eyelids, Blackest Eyes, Heartattack in a Layby.. you see my predicament here. So I just picked the one I cannot reach the end of and still be in a bad mood.

5. Liquid Tension Experiment – Universal Mind
OOoohh so difficult to choose an LTE song, but this one gets a lot of airtime in my head. "Hourglass" and "When the water breaks" close contenders here. I adore most, if not all LTE music, but this one is pretty amazing to drive to, and gives me aspirations to suck less at keyboard playing.

Miscellany
I avoided saying anything by Replica X – because it would have seemed arrogant (arrogance is not warranted for my talents), but I love playing many of the RX songs, especially 'Ninjas and Eternity.

Other hereforto unmentioned bands that don't fear the "next" button include: Symphony X, Aryeon, Freak Kitchen (and Mattias), Liquid Tension Experiment, Neal Morse, Pain of Salvation, Sonata Arctica, Stratovarius, Tony McAlpine's CAB, and maybe a little Tower of Power. Oh and A.C.T. Anyone who is into the band A.C.T. who I don't know of must e-mail me right now because you've obviously got taste. If there's enough people I'll make an ACTSoc.

The Five People I'm passing The Baton On To:
I'm not "passing the baton" to anyone! Please put in your own knob joke here.

Or: "If only I could be an asshole"

This is my first publicly viewable DPOH post – feel honoured now, because by the time you reach the bottom you may not be in the mood.

It's Summer time. And apparantly we have women, we have women on our minds. Or men, presumably. Or both or neither, I didn't write the song. Either way, it's all a bit strange.

Why is everyone doing this….?

While I've been doing this….?

Am I just the model of inefficiency? I'm thinking that Sex is different for every person. I don't just mean the act, I mean the definition of what's involved in the whole process, and its meaning. As a scientist maybe this is what's confusing me – I need a manual or something. Okay, laugh if you will (you will), but what is it about relationships with women that seem to make relationships with men look simple (entirely from a man's point of view)? No really, I am actually asking. Anyone who would answer would be female… and I can't trust them because they've been lying about the whole thing to spare my feelings or preserve some child-like naiivity – the stem of the whole confusing issue in the first place. I don't need to be treated like a child… frankly I think they just don't want to let me into their stupid private club1.

Maybe it's an experience thing – like learning to ski. Frankly, I shouldn't be riding on the diamond slopes when I'm still getting to grips with staying on the t-bars. Not that it's not good for all concerned. Mostly. But disappointing someone who has predictions and routine is a terrible feeling. Here's me wandering in with thoughts of "spontaneity" and "open sexual practices" and "honesty", and certain people (let's call them "SOME women" as to not offend anyone) come in to the mix and fuck it all up by trying really hard not to hurt my feelings by not saying what they want or why (I am venturing outside of sex for that sentence, please try to keep up). Cosmo, the Internet and their friends can tell them what to do about the whole thing – which sort of defeats the whole "relationship" thing doesn't it?

I suppose I'd have to be in a few more relationships to take decent cross-section. Maybe I've just been very unlucky.

It could be a power thing. Let's categorise every female in the same way, to make things easier. Females like to be socially dominant, and sexually submissive. Exceptions include some bisexual and lesbian women, women with too low intelligence to hold a conversation (mostly found in American Teen movies), women who act weak to attract assholes (also in teen movies), and Dominatricies2.

Power play is an interesting psychological concept, especially when you throw it onto something as complicated (yet apparantly simple) as sex. A lot of women like to feel submissive to a man in a sexual relationship, which is why assholes and girls tend to mix well sexually, and nice guys get to listen to the women complain about them being assholes.

The social dominance in a relationship isn't a "problem with women"... there is no actual "problem with women"... it's a problem with mankind. "I want x and I want it now" syndrome. It's a two-way relationship, but it's just more two-way on my side because I don't want to sacrifice anything for mutual benefit. What is all this "cutting off sex" and "controlling your man" and "I'll walk over them if they let me" shite? If you don't want sex, don't have it. But don't deliberately deny it to spite or control your partner, that's just sick! It's a mutual thing isn't it? And don't turn around and say "they let me walk all over them"... that's like saying "he let me stab him, officer, didn't fight back once!".

Not that I don't mind being controlled per se3, it's the presumption that worries me. How can you have a relationship with someone if they don't even have the respect for you to treat you like a human?
When you respect each other, and are ready to exchange the "fight for power" with give and take… THEN you can have a relationship, as far as I'm concerned. You can dump all the power struggle sexual practice im-a-woman-you're-in-charge crap on top of that if you want to. Just build it on a foundation of respect and honesty, it's really not that difficult I'm sure.

But then… if I'm the only one thinking this way, then what's the point in wanting relationships anyway? Screw it, I'll have a cup of tea and watch episodes of Futurama instead. At least until I get a Plan B.

Practical solutions… hmmn. All I need to do is wait for someone a bit like me, who really doesn't care about the manual instructions, as long as it's good (and fun) in the end. Relationships are two-way mutual connections – to have fun together. Laugh, play, sleep, and.. if time permits.. sex whenever compatible and enjoyable, without resentment. I'll wait for that sort of relationship.

Fulfilment of Request from a Blacker Soul

This one is called "Claire"

We think it and we see,
We speak it and she turns,
We hear it and we turn and see her turning
Because she heard it too

Claire! The Greeks had it right
inventing such names with meaning
that races from the mind and explodes and
shatters into
a thousand meanings – Bright, Shining, Clear!

And it's her name.

This one is called "Ray's mantra"

Ray knew it like he knew his own name…
Ray.
The rays were in there, his mantra for mantas
mantraing like a repeating mantra about mantas.

Or not. Porblems, issues, etc have led me to create an interpretation of my feelings as an animated gif

If you want it to rain on your picture, but don't know how to make your dream come true, e-mail the picture to me and i'll rain on it!

Poems from a Blacker Soul 2

This one is called "Death lies naked on my porch"

This one is called "Light of the World"

Oh pulchritudious fate!
Why did you make it so dark so late?
The Greeks had it right,
They used lots of light
And candles.

This one is called "Meta Meta Four"

This one is called "Star Bright"

Star bright!
Yet so dull
With blasts of heavenly rays
Of darkness

This one is called "Yeah, Yeah"

If you want the Blacker Soul to write you a poem, please contact him at spockstension(at)hotmail.com with your topic

I've taken to saving my MSN drawings. So I put them on here. Yup. See the new gallery!

A few examples of my "talent": 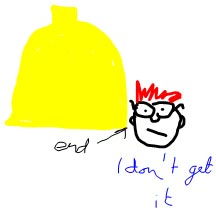 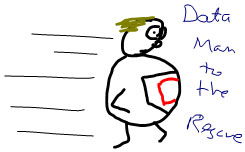 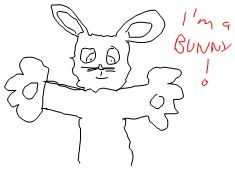 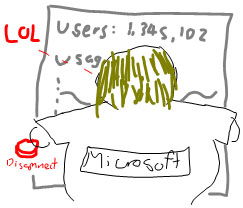 Poems from a Blacker Soul

Oh Fate!
The Greeks had it right
probably.

Oh why doesn't she love me?
Or like me or something?
Cruel passion, cruel desire
why do you torment me with this hardon?

Love me, like me
Acknoledge me!
Why try harder,
When I dont exist to her?

My soul of glass
shatters on her icy stare
of not liking me
At all.