Whilst nosing around on amazon the other day, I found these at a frankly rude-not-to price of £65. For anyone who’s never seen one before, this is sold as a device to turn a USB disk into a network-attachable (SMB/CIFS + FTP) bit of storage. 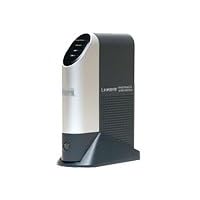 All well and good. But what it really is, is a tiny, tiny, but very much real, computer. It has a 266Mhz Intel XScale ARM-compatible processor, 32MB of RAM, 2 USB ports, a network port, some blinkenlights, and a speaker that can go ‘beep’. It has no fan, uses between 2 and 10 watts of power, and is completely silent (except for the beep :-)) .

It won’t run windows (thankfully), but there are several (see comments) linux-based distributions that run on it; the two that I looked at were unslung and debian . Unslung is (probably) slightly easier and more appliance-y; Debian is more flexible but some stuff might not work so easily. I went for debian, more because it’s what I’m used to than for any other reason.

Reflashing the bios was reasonably straightforward, although I failed to read the instruction which said ‘change the default IP address if you want to be able to find this thing on the network post-install’ – if you leave the IP address at it’s default, the debian installer will use DHCP, but there’s no easy way to find out what address has been allocated (nmap -sP to the rescue!).

Installing the operating system was also pretty easy. The only caveat is that the re’s not enough RAM to format a large disk (I used a 500G WD) during installation. The solution is to create a small-ish root partition (mine is 4G) and swap space (another 2G), then partition the rest of the disk once the install’s finished.

I’ve since installed Samba (windows file sharing), Twonky (UPnP audio streaming) and BIND (cacheing DNS server; Orange LiveBox DNS sucks badly). OpenSSL is installed as part of the base setup, so sFTP works out of the box, meaning that I can mount the file systems from linux boxes pretty straightforwardly (without having to rely on SMBFS). Next to try is a Squid web proxy, mt-daap to serve up my MP3 collection to any itunes clients that don’t have a copy,and and imap server, with a copy of my Gmail mailbox on it. I’ve enabled port forwarding on my router to allow port 22 (SSH) through to the box too, so I can access it (and tunnel any other ports as needed) from the outside world.

So far, it’s all been very straightforward. I can’t quite decide if, once the novelty value has worn off, I’ll use anything other than the file-serving capabilities, but even if I don’t, it’s a pretty cheap way to get an (expandable) half-TB of backup space.