All entries for Thursday 19 October 2006

yay :-) By the simple expidient of removing one of the two DIMMs, I seem to have cured my powerbook. Sure, it’s got 1/2 a GB less memory than it did, but it’s still OK for most stuff. And it stays up for more than a quarter of an hour at a time. Joy.

I took the day off yesterday, and headed for Coed-y-Brenin for a day’s mountain biking. I visited CyB last summer , when we did all the trails in one very long day, but this time round we weren’t intending anything quite so strenuous.

CyB has had a fairly substantial makeover over the winter, with a spangly new visitors centre, a re-configuration of the trails, and a few Ks of new singletrack. There’s more in the works, too; as we went round we could see where the new lines were going to be, so it’ll be worth revisiting next spring.

As we drove over, the weather was grim, with thick fog and light drizzle, but once within about 20 miles of the coast it suddenly cleared, and we had blue skies and warm sunshine all day.

We set off to do the ‘Dragons Back’ – a 30K route that takes more-or-less the same route as the Karrimor used to on the east side of the valley, but missing out the stuff on the west, and with some new singletrack to start with. It started with a KM or so of fairly technical amoured trail, presumably put there as a ‘granny-stopper’. Stu, who’s riding has thus far been restricted to Cannock plus one short trip in the Peaks, found it tricky, and was over the handlebars after a couple of hundred meteres. However, he got the hang of it pretty quickly (there’s really only 2 things to remember: arse off the saddle and over the back wheel to keep your weight back, and don’t touch the front brake when you’re on wet rock).

We carried on round, taking in more nice singletrack, followed by an interminable climb up over the back of the valley (we stopped for a breather, and were circled overhead by a pair of buzzards and a raven, presumably waiting for us to expire). Then the ‘Adams family’ descents – this time a bit sketchy on the wet rocks at the top, but still bags of fun, especially on the rollers lower down. Then the annoyingly loose and tiring climb back up for the ‘pink heifer’ descent – again good fun, but getting a bit erroded. There’s a new line being dug parallel to the old descent which looks like it will be a classic when completed.

At this point, Stu’s legs decided they had had enough, so he took the fire-roads back to the visitor centre, whilst I went for one last climb, then the ‘beginning of the end’ descent back down, which I think has been re-armoured recently as it’s become very rocky. I was glad to be riding the coiler, with stacks of suspension travel to compensate for my mistakes, rather than the more unforgiving hardtail.

I attempted to take a few photos on the way round. As per usual, the action shots were rubbish – there’s just not enough light in the woods for my feeble little camera to get a fast enough shutter speed, and I never want to stop on the good bits to take pictures. But some of the scenery came out quite nicely. 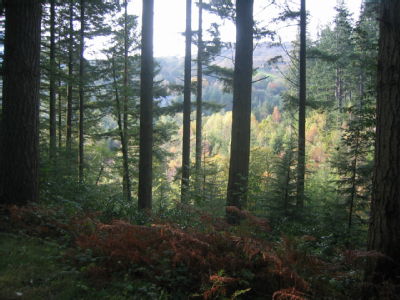 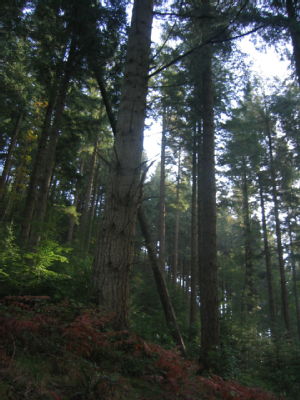 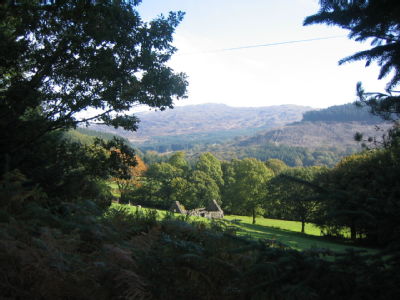