What is axiology and how does it relate to ontology and epistemology?

According to Encyclopaedia Britannica

Axiology, (from Greek axios, “worthy”; logos, “science”), also called Theory Of Value, the philosophical study of goodness, orvalue, in the widest sense of these terms. Its significance lies (1) in the considerable expansion that it has given to the meaningof the term value and (2) in the unification that it has provided for the study of a variety of questions—economic, moral, aesthetic, and even logical—that had often been considered in relative isolation.

But how does axiology sit within other elements of the research paradigm? namely ontology and epistemology

In order for us to be able to understand the different meanings of each of these lovely terms, we need a historical prospective.

I was able to find references to four major eras of human understanding of reality and knowledge generation. We will call these eras of realism.

So in short, ontology, epistemology and axiology used to mean different things in different times of history according to how people generally perceived the world and regarded knowledge as being created. Not very helpful? Here's somthing

Dr. Marcia Hills and Dr. Jennifer Mullett (from the University of Victoria, Canada) wrote a very useful account defining Paradigm, Ontology, Epistemology And Axiology. Here is what they had to say about these concepts and how they relate to research (these were directly copied from their article):

A paradigm is "a set of basic beliefs (or metaphysics) that deals with ultimates or first principles. It represents a worldview that defines, for its holder, the nature of the world, the individual’s place in it, and the range of possible relationships to that world and its parts, as , for example, cosmologies and theologies do" (Guba & Lincoln, 1994, p. 105). Guba & Lincoln made a significant contribution in articulating four differing worldviews of research - positivist, post positivist, critical, and constructivist- based on their ontological, epistemological and methodological assumptions. Heron and Reason (1997) argue for a fifth worldview – a participatory paradigm. Community-based research is situated within this paradigm and also embraces the ideology and methodology of co-operative inquiry created by Heron & Reason (1988; 1994; 1996; 1997).

A participatory paradigm rests on the belief that reality is an interplay between the given cosmos, a primordial reality, and the mind. The mind "creatively participates with [the cosmos] and can only know it in terms of its constructs, whether affective, imaginal, conceptual or practical" (Heron, p.10) "Mind and the given cosmos are engaged in a creative dance, so that what emerges as reality is the fruit of an interaction of the given cosmos and the way the mind engages with it" (Heron & Reason, 1997 p. 279). As Skolimowski (1992) states; "we always partake of what we describe so our reality is a product of the dance between our individual and collective mind and "what is there", the amorphous primordial givenness of the universe. This participative worldview is at the heart of the inquiry methodologies that emphasize participation as a core strategy", (p.20).

Ontology refers to the form and nature of reality and what can be known about it (Guba & Lincoln, 1994). In contrast to orthodox research that utilizes quantitative methods in its claim to be value free (but which is more accurately described as valuing objectivity), and many qualitative approaches that value subjectivity, community based research endorses a subjective-objective stance.

An subjective-objective ontology means that there is "underneath our literate abstraction, a deeply participatory relation to things and to the earth, a felt reciprocity" (Abram, 1996, p. 124). As Heron and Reason (1997) explain, this encounter is transactional and interactive. "To touch, see, or hear something or someone does not tell us either about our self all on its own or about a being out there all on its own. It tells us about a being in a state of interrelation and co-presence with us. Our subjectivity feels the participation of what is there and is illuminated by it", (p.279). So community-based research is interested in investigating people’s understandings and meanings as they experience them in the world.

Epistemology refers to the nature of the relationship between the knower and the what can be known. Guba & Lincoln (1994) claim that orthodox science, because of its belief in a "real" world that can be known, requires the knower to adopt a posture of objective detachment in order "to discover how things really are" (p.108). There is a presumption that the knower and the known are separate and independent entities that do not influence one another. There is a search for the "truth"; for the facts in objective and quantifiable terms which holds empirical data in the highest esteem.

In addition to considering the three defining characteristics of a research paradigm suggested by Guba and Lincoln –ontology, epistemology and methodology, - Heron and Reason argue that an inquiry paradigm also must consider a fourth factor –axiology.

Axiology deals with the nature of value and captures the value question of what is intrinsically worthwhile? The fourth defining characteristics of a research paradigm, axiology, puts in issue "values of being, about what human states are to be valued simply because of what they are" (Heron & Reason, 1997, p. 287). The participatory paradigm addresses this axiological question in terms of human flourishing. Human flourishing is viewed as a "process of social participation in which there is a mutually enabling balance, within and between people, of autonomy, co-operation and hierarchy. It is conceived as interdependent with the flourishing of the planet ecosystem" (Heron, 1996, p. 11). Human flourishing is valued as intrinsically worthwhile and participatory decision-making and is seen as a means to an end "which enables people to be involved in the making of decisions, in every social context, which affect their flourishing in any way" Heron, 1996, p. 11).

One methodology that is particularly well suited to community-based research is co-operative inquiry (Heron, 1996; Reason, 1994). Co-operative inquiry is a participatory action methodology that does research with people not on to or about them. This methodology engages people in a transformative process of change by cycling through several iterations of action and reflection. Co-operative inquiry consists of a series of logical steps including; identifying the issues/questions to be researched, developing an explicit model/framework for practice, putting the model into practice and recording what happens and, reflecting on the experience and making sense out of the whole venture (Reason, 1988). Therefore, evidence about what constitutes "best practice" is generated by people examining their practices in practice and reflecting on these practices.

You have read alot, here's a funny comic 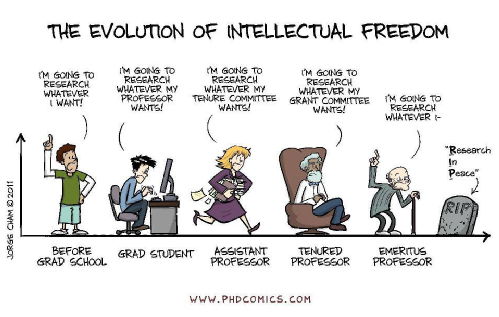