'Watercolours of the Great Exhibition' at the V&A

Whilst at home over Christmas I took the opportunity of being near London to visit two exhibitions at the Victoria and Albert Museum that had caught my attention recently.

The first of these, "Watercolours of the Great Exhibition", is a small collection of paintings depicting scenes from the Great Exhibition of 1851. This was the first international exhibition of its kind, bringing together over 13,000 exhibits from all over the world, ranging from arts, textiles, and statues to industrial and scientific objects. Henry Clarke Pidgeon's painting of the Russian court captures some of the variety of items on display: The watercolours were actually painted before it opened to the public, and therefore don't quite convey how busy the halls would have been: over 6 million visitors came to the exhibition over the 5 months it was open - that's about a third of the population of Britain at the time, and although many people would have come from overseas, the exhibition nonetheless figures as a hugely important event of the Victorian period. The impressive scale of the exhibits and size of the building is hinted at in the painting of the Russian court, and more obviously seen in John Absolon's watercolour of the centrepiece of the Belgian display: 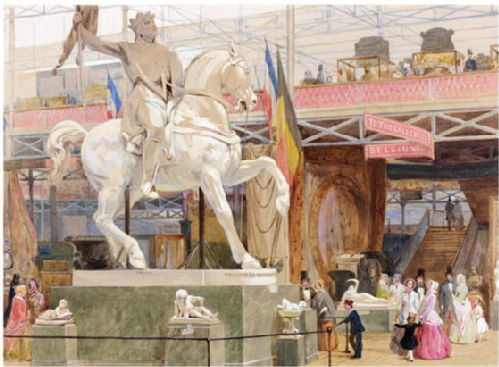 In the background above the statue, part of the building that housed the exhibition can be seen: the 'Crystal Palace' designed by Joseph Paxton especially for the exhibition. The Crystal Palace, initially built in Hyde Park and later moved to Sydenham after the exhibition, was the first large-scale building composed of glass and iron: its 300,000 panes of glass covered nine acres of land, even encompassing parts of the park within it- at its greatest height, an entire elm tree was enclosed within the structure. This was a revolutionary piece of architecture: Marshall Berman regards it as "the most visionary and adventurous building of the whole nineteenth-century", expressing the potentialities of the industial age (see All That is Solid Melts Into Air, p. 237). The building provoked a great deal of controversy, many condemning it whilst others wrote of the great impression made by the structure. It is perhaps hard to imagine now why the building should prompt such a response- after all, it's basically a giant greenhouse, which is what Paxton was intially famous for. However, this new type of glass architecture produced a new spatial experience; Wolfgang Schivelbusch gives a fascinating account of how the glass walls provided a different, uniform, quality of light that, without the light-shadow contrasts that ordinarily organised spatial experience, disoriented traditional perceptions of space (see The Railway Journey: The Industrialization of Time and Space in the 19th Century pp. 45-51). Accounts of the time certainly support this idea, such as that of Lothar Bucher who wrote of the "delicate network of lines" that give no clue as to how "we might judge their distance from the eye or their real size":

we cannot tell if this structure towers a hundred or a thousand feet above us, or whether the roof is a flat strucutre or built up from a succession of ridges, for there is no play of shadows to enable our optic nerves to gauge the measurements. (in Berman, p. 239). To return to the watercolours, however, the Crystal Palace itself remains a background feature, drawing attention away from the controversy of the building to focus on the objects themselves- Henry Clarke Pidgeon's above painting offers the only view of the ceiling structure that comes close to Bucher's description. Whilst the paintings are rather hidden away in the V&A museum- located in a dark back-corridor that few visitors pass through on their way around the main exhibition rooms- many of the items from the exhibition are now on display throughout the V&A; the profits from the Great Exhibition funded the establishment of several arts and science initiatives such as the V&A, and the museum became home to many of the objects that were first displayed at the exhibition. The watercolours are therefore provide a nice starting-point for visiting other collections at the V&A, giving a new perspective on the more familiar items the museum has on display.

The paintings remain on display for a couple more weeks, after which they'll be in the Paintings and Drawings room, but they can also be viewed on this page on the V&A website- the enlarged versions are about half the size of the originals but still a good alternative to visiting the exhibition.