One of my favourite things to do of a weekend is browse the shelves of secondhand bookshops and I've been on a bit of a roll with old travel books in Leamington's Oxfam Books & Music in recent weeks, which I'll be blogging in the next few posts. 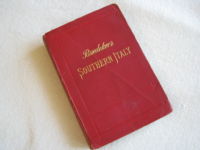 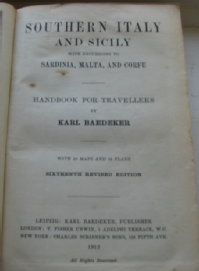 Full title: Southern Italy and Sicily, with Excursions to Sardinia, Malta, and Corfu; Handbook for Travellers, with 34 Maps and 34 Plans, Sixteenth Revised Edition.

Baedeker's handbooks, along with Murray's Guides, were the key tourist handbooks of the 19th century, accompanying many a tourist on their travels across the continent and beyond. Although the "guidebook" had long been used to advice travellers about their journeys, the Handbook was a slightly different genre, designed as a compact edition to be carried by the traveller on their journey. The Handbook included practical information to prepare the traveller, but also set out a planned series of routes to be followed.

This is the first edition that I've seen up close, and it's fascinating to see just how detailed the guide is as well as to read the surrounding material; between the two, there's a clear tension between being a "true" independent traveller as opposed to a mere "tourist" (I am of course drawing here on James Buzard's discussion in The Beaten Track1). The Preface informs the traveller that the aim of the Handbook is to "supply the traveller wtih some information regarding the culture, art and character of the people he is about to visit" in order to "render him as independent as possible of the services of guides and valets-de-place".

But whilst the emphasis here is on a certain mode of "independence", the heavily prescriped form of the Handbook is also hinted at: it is "in every way to aid him in deriving enjoyment and instruction from his tour". The Handbook's purpose is not just to set out the correct path to follow, but to aid the traveller in deriving the correct enjoyment from each sight - to give the traveller the lens through which to view all that he sees. As Buzard writes, handbooks "preceded the tourist, making the crooked straight and the rough places plain for the tourist's hesitant footsteps; they accompanied the tourist on the path they had beaten, directing gazes and prompting responses" (75); Dickens's depiction of tourists in Italy in Little Dorrit satirises the tourist's reliance on the handbook, describing masses of tourists "walking about St. Peter’s and the Vatican on somebody else’s cork legs, and straining every visible object through somebody else’s sieve” (428). Thus what follows are routes detailing exactly where to walk, what to look at, and even the timings of each stage: "from the piazza in front of the cathedral we proceed to the S. straight through a gateway, then ascend through the porch of the church of Sant'Antonio, pass the portal of the church of Santa Chiara to the left, and reach (8 min.) a door giving on the road." This level of detail constitutes most of the book's 500 pages, such that there almost seems little point to actually visiting the place itself!

The same can be said of the cultural attitudes of the English towards foreigners displayed throughout. The particular strength of feeling against Italians is demonstrated right from the start: the first paragraph of the Preface ends by stating "the Handbook will also, it is hoped, save the traveller many a trial of temper; for probably nowhere in Europe is the patience more severely taxed than in some parts of Italy." In the section giving practical advice, stereotypes of Italians abound: it is noted that begging "has in Italy been regarded from time immemorial as a legitimate mode of earning one's daily bread", reference is made to the "insolence and rapacity" of cab-drivers, and we are warned that "the popular idea of cleanliness in Southern Italy is behind the age, dirt being perhaps neutralized in the opinion of the natives by the brilliancy of their climate". The travellers' health is of great importance, with strict instructions on what to eat and drink (avoid "free indulgence" in most foods) and what to wear when: "always be provided with a greatcoat or shawl .... Woollen underclothing is indispensable." No detail is left out, even the traveller's body incorporated into the institutionalisation of travel.

This edition has certainly seen a few travels in the last 100 years, although it's in good condition and the colour maps and plans (as above) are still vibrant (and notably, all details in Italian). The next book I'll be blogging about is slightly different in focus and purpose, recounting a visit to Morocco in the 1920s.