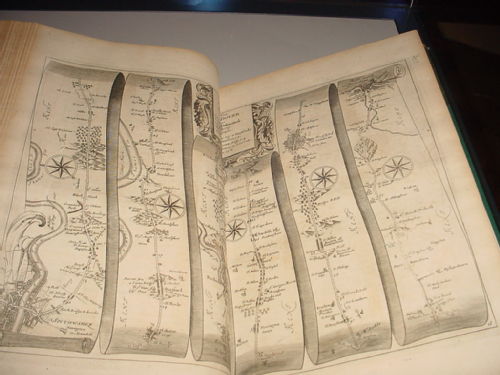 The 18th annual conference of the 18th and 19th Century British Women Writers Associationtook place last week at Texas A&M University. The theme this year was "Journeys", making the conference highly relevant to my research and well worth the trip to Texas. The 3 days provided many stimulating panels, as well as much intellectual discussion in between- the notes that follow are by no means a comprehensive account of the conference, just a few notes on things that interested me or related to my own work.

The first day was a good one for Victorian novels- the panels I attended included papers on Charlotte Bronte, Elizabeth Gaskell, and George Eliot. Jessie Reeder, from the University of Wisconsin-Madison, presented a paper on "Romola's Journeys", in which she focused on the novel's construction of the city wall surrounding Florence in the context of Victorian anxieties of national identity and national boundaries- the question of how to negotiate the tension between achieving global reach whilst upholding a defined national identity in a country that has no definite, material boundary. The representation of the city wall in the text materialises a response to this, embodying conflicting tensions- although responds more to the question of "national identity" in general, rather than British identity in particular. The novel plays a similar role to the city walls by expelling characters abroad, but ends by asserting an individualised notion of identity, constructing boundaries around the self as the strongest of all.

Two papers on Villette followed in the next panel. Patricia Frank, from the University of Wisconsin-Madison, spoke about spatial solitude in the novel, identifying how Lucy Snowe's control over space and over the self are interlinked in the novel. I was also interested that she mentioned how Mrs Bretton is often representationally associated with landscapes in the novel, something I hadn't paid detailed attention to before. Megan Burke Witzleben from Fordham University followed with a paper on home and interior travels in Villette which looked at Lucy's challenging of, and responses to, different home-spaces as part of her development of identity. She contended that the concept of "home" asserted through Lucy is a uniquely English cosmopolitanism.

In a panel on "Medical Travels: Mapping the Body", I was interested in Emily Baldys' paper on disability in Gaskell's shorter fiction, and her reading of the "flexibility" of disabled bodies. Kathleen Beres Rogers' paper on "Medical Geography in Elizabeth Barret Browning" also explored intersections between location and health. The two papers provided an interesting perspective on the relations between geographical movement, place, and embodied constitution as a fluid, mobile, and malleable process in texts.

I began the second day presenting my paper, "'Wandering out Into the World': Women Walking in the mid-Victorian Novel". The panel generated much discussion as my paper was preceded by Christi Blythin's "Why Ladies Can't Enjoy a Good View: The Freedom to Walk in Bronte's Shirley", which discussed the gendered issues that impact upon representations of women walking. Using George Meredith's The Egoist as a point of comparison, Christi identified the issues of restricted access to unmediated nature that faced women (of reasonable wealth) who could walk out, but only along the set paths and routes of English country-house gardens, which were crafted for the particular views and prospects they provided. Shirley celebrates the rare opportunity and freedom that unrestricted walking offers to women: Shirley and Caroline's friendship is forged whilst walking in a way that it can't be in the restricted environment of the drawing-room, which demands certain codes of feminine behaviour and conversation. But the novel recognises that this freedom is being lost, with changes to the landscape- namely enclosure, and the encroachment of industry/technology across the landscape- not just displacing the poor, but restricting access to "natural" nature which is set-up as a particular problem for women.

This provided an interesting contrast, and complement, to my own paper which also touched on issues of gendered space and the distancing of women from travel-spaces- although this is an implicit background context to my work, this was something I could only touch briefly upon as the main focus of my paper took a different direction. I looked at how Charlotte Bronte and Eliot depict female travellers (Jane Eyre, and Hetty Sorrel) undertaking lengthy walking journeys in which we see their awareness of gendered codes of travel impact upon the embodied experience of the female walkers. Whilst highly negative assumptions surround women walking alone- mainly sexual promiscuity and madness- in these narratives, the recognition of their contentious, highly visible, position in the streets opens up the texts to a heightened attentiveness to physicality and the embodied experience of travel. Both novels explore the body's physical experience of travel spaces, constructing a body-space relationship that asserts travel as a material, spatial practice; through this, a spatial understanding is forged, with the travellers coming to embody an understanding of spatial distance and scale. I contextualise this within the disruptions to spatial understanding that the railway effected in its annihilation of time-space relationship, situating these novels as constructing walking as a mode of travel which responds to this spatial challenge, forging an embodied relationship to the land through which space "makes sense" to the body.

On the final day, the panel titled "Doing the Continental" centred upon female travellers in European spaces. Mollie Barnes' paper on Felicia Hemans' The Restoration of the Works of Art to Italy was interesting in considering the movement of objects out of their original context and posing questions about how new meanings are generated by the positioning of objects in a different place to the original location in which they were intended to be seen. Her discussion of Italy as an imaginary space for representations and ideas of nationality was also useful in broadening my thoughts about British conceptions of Europe into the earlier part of the century. Following this,  Katarina Gephardt's paper on Menie Dowie's A Girl in the Karpathians discussed her writing as anti-travelogue, going against typical conventions of travel writing- issues of the gaze, the situation of the body, performance of the embodied self were all indicative contexts. Here, as with many other papers, I found myself looking forward to getting hold of a copy of the text on my return! Finally, Laura Olcelli's paper on "Ladies of the Grand Tour" discussed foreign linguistic innaccuracies in the works of writers such as Marianna Starke, who use Italian words and phrases throughout their works to acheive particular effects; identifying numerous mistakes and incorrect uses of words, however, provided an interesting reading of how these intended effects are countered or lost of translation.

Kate Flint's keynote, "Emotional Baggage: Reading, Affect, and the 19th-Century Woman Traveller", was a fascinating exploration of the intersecting themes of the conference. Centring around the question of "what might it be to be a female travelling reader", Flint's talk began discussing the ways in which "to read is to travel"- the reader as a literal traveller, mentally voyaging- before thinking about questions that are raised when the reader is in motion or abroad. The mental voyage here is perhaps not so much outwards, towards the unfamiliar, but rather turns to the familiar, home, national and personal identity. And the relationship between production of meaning and spatial location is crucial: a text acts differently upon the reader depending on where it's read; reading makes sense of places, and generates different senses in different places. I was particularly interested in thinking about the ideas around reading whilst in motion, in the act of physical mobility- something that was, whilst not new to industrialised travel, certainly much enabled by railway travel: reading was much more possible on the train than in a jolting carriage, and played a role in the changing meanings of being a traveller, contributing to the increasingly individualised experience of travel- asserting one's personal space within the public railway compartment - and the dislocation or removal from the embodied interaction of travel-space: travelling inwards rather than engaging, physically and mentally, with the space being traversed.

The conference drew to a close with dinner and awards, at which I was very grateful to be one of three recipients of the BWWC graduate student travel scholarship. I didn't hang around to explore Texas- a 2-hour shuttle bus back to Houston the next day was the most I saw of the surrounding area, but we were lucky to be driving through in wildflower season in full bloom so it was a more interesting landscape than I'd expected. I doubt I'll be able to attend next year's conference in Ohio, but hopefully in future years I'll return as it's certainly the liveliest conference, and most supportive of graduate students, that I've been to (and a lot of fun too, which is always a bonus!).