All entries for January 2012

The Interconnected Worlds of Bleak House

Following the podcasts I recorded for the Celebrating Dickens site, Warwick's Knowledge Centre have run a piece on my work, titled "The Interconnected Worlds of Bleak House". A piece on travel in Little Dorrit will also be published next Friday.

This is a cross-post of a piece I wrote for the University of Warwick's Celebrating Dickens site: you can read the original here.

In the last few months building up to the bicentenary of Dickens’s birth, there has been an unprecedented level of interest in Dickens’s life and works. Dickens’s popularity is, of course, not just a trend of recent years but stems right from his earliest publications, when Sketches by Boz and The Pickwick Papers grabbed the attention of readers and established Dickens as a household name. But many popular writers of the nineteenth century haven't remained so prominent in our literary culture, so what is it about Dickens's work that continues to appeal to readers? 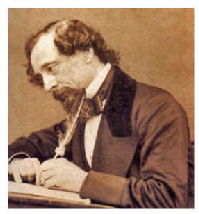 There is much to be said about the prominence of Dickens in our national cultural heritage, or the literary politics that determine why some writers’ legacies perpetuate whilst others become lost; not to mention the ways in which “Dickens” has become somewhat synonymous with our idea of the “Victorian novel”, and even the Victorian era more widely. But at the heart of Dickens’s legacy lies his writing: vivid and richly detailed language, the ability to succinctly capture human character, and to evocatively depict a wide spectrum of emotions, from humour to sympathy, across characters from all levels of society.

Whether of places, things, or character, Dickens's observation is acute. Our idea of "Dickens's London" comes from his sharply perceived descriptions of the city streets: the opening of Bleak House, for example, depicting foot passengers jostling through the city enveloped in dense layers of fog, remains one of the most memorable literary descriptions of London. A detailed knowledge of the city streets recurs throughout his novels, from characters like Pip or David Copperfield entering the city for the first time and becoming overawed “by the immensity of London” (Great Expectations), to those who see only the monotony of the claustrophobic city, with “nothing to change the brooding mind, or raise it up” in the “streets, streets, streets” (Little Dorrit, chapter 3).

These city movements frequently take us into the spaces of the poor, placing narrators as urban observers revealing the squalor of urban life: one account in Sketches by Boz traverses “streets of dirty, straggling houses, with now and then an unexpected court composed of buildings as ill-proportioned and deformed as the half-naked children that wallow in the kennels”. In this emerges Dickens’s sympathetic portrayal for those at the lowest end of the social spectrum: from individuals like Jo, the poor crossing-sweeper in Bleak House who “don’t know nothink,” to the multitudes of “stragglers who come wandering into London” only to provide “food for the hospitals, the churchyards, the prisons, the river, fever, madness, vice and death” as they are swallowed up by the monstrous city (Dombey and Son).

As this makes clear, Dickens’s narration always situates individual experience within wider social structures. His satire comes into full force when attacking social institutions, demonstrating varying degrees of inadequacy, inefficiency, and downright injustice. The Circumlocution Office of Little Dorrit is a memorable example: “the most important Department under government” has “its finger in the largest public pie, and in the smallest public tart”; nothing can be done “without the express authority of the Circumlocution Office” and yet it is “beforehand in all public departments in the art of perceiving – HOW NOT TO DO IT”.

Dickens’s characterisation of individuals is also always attentive to detail and his novels are populated by a host of memorable characters – all the more so for their names: Pumblechook, Pancks, Micawber, Peggotty, Bagstock, Mr. F’s Aunt, Chuzzlewit, Turveydrop, and M'Choakumchild are just a few of the vividly inventive names. Dickens’s descriptions of character are often ironic or humorous, and typically succinct in capturing the essence of character: in Bleak House, for example, his introduction to Sir Leicester Dedlock tells us "his family is as old as the hills, and infinitely more respectable. He has a general opinion that the world might get on without hills, but would be done up without Dedlocks." Those two short sentences encompass Sir Leicester’s mode of feeling, raising a smile with something of a humoured sympathy towards the blinkered vision of the aristocracy.

Finally, what has often interested me in Dickens’s works is his approach to new technologies such as the railway, met with an ambivalence that produces a fearful fascination: who can forget the railway journey of Dombey and Son in which the train moves “away, with a shriek and a roar and a rattle, plunging down into the earth again, and working on in such a storm of energy and perseverance, that amidst the darkness and whirlwind the motion seems reversed.” The insistent urgency of the passage is expressive of the railway’s capability for destruction, but is all the more effective for the way it renders human experience within this landscape: the railway serves to represent Dombey’s tormented psychological state at this point in the narrative, his distress at the death of his son clearly conveyed as he “hurries headlong, not through a rich and varied country, but a wilderness of blighted plans and gnawing jealousies.”

200 years after his birth, Dickens’s writing remains as evocative as ever and the range of responses to the bicentenary stands as testament to the variety within his writing.

As I have mentioned previously, Warwick have a Celebrating Dickens website that draws together researchers from across the university discussing their perspectives on Dickens and Victorian life.

The website has just been updated with more podcasts from researchers around the University, and I've contributed two podcasts discussing my own research: the first is on travel and mobility in Bleak House, and the second discusses representations of Europe in Little Dorrit.

This joint meeting of the Midlands Interdisciplinary Victorian Studies Seminar (MIVSS) and the Midlands Romantic Seminar (MRS) focused on the idea of borders and periodisation in the long nineteenth century, particularly thinking about the Romantic-Victorian border: where do we draw the line between Romantics and Victorians in teaching and research, what purposes do they serve, and what about the grey areas in between?

I only attended the afternoon sessions, which began with Julian North speaking about "teaching and researching across the Romantic/Victorian border", and it's this paper which I want to focus on here. Julian started by discussing the plurality of Rom/Vic borders, suggesting the possible dates that might be chosen - the beginning of Victoria's reign in 1837, the deaths of the Romantic poets in the 1820s, the Reform Bill of 1832 - the possibilities are endless and always problematic in their attempt to neatly define the end/ beginning of an era. From my perspective, I'd suggest the coming of the railway in the 1830s as the decisive moment separating the Romantics and Victorians: Thackeray's comment that “we who have lived before the railways were made, belong to another world ... It was only yesterday; but what a gulf between now and then!” encapsulates the sense of the railway creating the world anew, but even with this we can't neatly date "the coming of the railway" (the Stockton-Darlington railway in 1825? the first passenger line between Liverpool and Manchester in 1830? or the spread of the railways in the "mania" of the 1840s?). Or from a global perspective,we might take 1815, the re-opening of continental borders at the end of the Napoleonic wars, as signalling the first moves into a new era of global modernity. Julian North also thought about the motives for imposing and crossing borders - something, it emerged later in the discussion, that is particularly a product of literary studies (and perhaps history of art), rather than history where the borders tend to depend on the specific research project. Periodisation was posed as a product itself of the Victorian period: the impulse in Victorian biography to impose a sharp distinction between the Romantic and Victorian periods- a generational conflict, in which the Victorians assert themselves as the responsible grown-ups to the young, immature Romantics.

The borders for teaching purposes were also raised: how do we define a module, what kind of borders do we construct within and around it, and what does this say to students about the period they're studying? How do we teach the nuances of different parts of the periods in question, and how much does it matter? I wondered here too about generic differences: are the Rom/Vic borders more clearly defined or more easily imposed, perhaps, with regards to poetry (neatly divided here between term 1 on the Romantics, term 2 on the Victorians) than with the novel? The 19th century novel course on which I teach moves back and forthwithin the period 1800-1899 at various points as it's structured thematically rather than chronologically; and as a result, we rather quietly cross - or rather, leap - over the problematic Rom/Vic area: there's a noticeable gap in our chronology of texts from Austen in 1814 to Emily Bronte in 1848. Arguably when teaching the novel it's the mid-century period where things begin to get really interesting (I'm biased, yes) but that's not to say there isn't a lot of interesting work going on around the Rom/Vic borderlines and it is of course indicative to think about the kinds of negotiations in literary form going on around that period, and how that leads the way for what feels more firmly established by the later decades.

The question of the end-point of the century was also discussed - are the 1890s the start of a new period completly defined from what comes before? - and I'll be thinking about these questions more over the next few weeks as we move into the later nineteenth-century and start to think about what kind of meaningful connections are to be made (or not) both with the mid-century and across the period as a whole.

The MIVSS/ MRS event also raised some interesting questions around collecting objects, with Kate Hill's paper on Romantic and Victorian collections, which was pertinent in light of this cfpfor a conference on "Transforming Objects" which was recently announced - I'm considering revisiting a short section of the thesis on foreign objects in the Victorian novel, which will provide a nice change of direction to all the Dickensian mobility of late.