On Friday 29th June, I presented a paper at the Midlands Interdisciplinary Victorian Studies Seminar which focused on the theme of "Victorian Things Revisited" (full conference write-up here). My paper "'What connection can there be?': Objects, People and Place, c. 1851" represents a new direction in my work, developing a gradually emerging interest in material culture and the ways in which objects can be reconsidered in the context of space and mobility.

The paper originated in some research on Bleak House last summer, when I began to think more about the significance of the Great Exhibition for the national-global relations in the novel. I was particularly interested in some images by George Cruikshank (below), and the many questions they open up around the relationship between people, things, and place. As I blogged at the time, in looking at these images one can't help but recall the central question of Bleak House: "what connexion can there be [...] between many people in the innumerable histories of this world, who, from opposite sides of great gulfs, have, nonetheless, been very curiously brought together!” 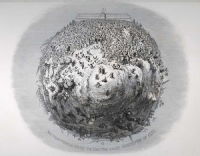 Cruikshank's images illustrate the text of Henry Mayhew's comic novel 1851: or, the Adventures of Mr and Mrs Sandboys and family who came up to London to 'enjoy themselves' and to see the Great Exhibition, and it was this that formed the focus of my paper. Most attention to this text has focused on the glimpses Mayhew gives us of the Exhibition, where we find an interest in the objects on display, the new people present in an internationalised London, and the potential social good of the Exhibition (against the backdrop of Mayhew's other work of the same year, London Labour and the London Poor). But what interested me most was the way in which the narrative surrounding this also demonstrates a continual interest in things, people, and place, and their changing relations to one another. As the Sandboys family make their way to and around London, they encounter a continual stream of comic accidents and misfortunes in which people and things repeatedly surface and come into contact in unexpected ways. In particular, it's the connections forged through the mobility of people and things, and the implications for the space of the nation, which emerges as a key question of the text.

The wider framework for this reading, which I'm still teasing out somewhat, is the move towards thinking about objects in the context of global networks of mobility. This has emerged particularly in the context of imperial networks of commodities, and John Plotz's Portable Property: Victorian Culture on the Move is a fascinating study of objects "on the move", suggesting that pieces of "portable property" become resonant repositories of national identity in an increasingly global, mobile world. Plotz's main concern is with objects moving out from Britain, and his reading of "reverse portability" is concerned primarily with identifying an "imperial panic" raised by objects coming into Britain. I think, though, there's a lot more to be said about the circulation of objects (both British and foreign) within Britain not just as producing an adverse imperial reaction but also for the narratives of national identity, and physical traces of national space, that mobile objects create. There is, too, further scope for thinking about the ways in which objects function within a world being physically reshaped through mobile networks; objects make visible the abstract concept of a compressing world space, leave tangible traces of the connectedness of the nation to wider networks of mobility.

These are ideas that I'll be exploring as I develop the paper further, and the discussion that followed was extremely helpful in shaping some of the directions this will take. I'll be thinking more about 1851 alongside Bleak House, another novel written in the wake of the Great Exhibition and similarly preoccupied with the connections between people and things on the move; I was reminded, though, that there's the potential for connections to work as a more positive, benevolent force in Dickens, whereas my reading of Mayhew focused more on the anxiety surrounding these interactions. There's also more to be said around ideas about bodies and/as places/things: my discussion of body-thing interactions started to stray into ideas around embodiment and of the body-as-place, with feminist geography theory lurking in the background; in my next reading of the text I'll be thinking more about the mobility of the gendered body and the more nuanced readings of place/space relations that this might open up.

I'm entering into discussions of objects from the perspective of someone more familiar with ideas around space and mobility rather than material culture and I've still got a way to go with fully drawing out the nuances of these arguments - and I'm aware that a lot more reading (and re-reading) on material culture awaits - but I'm excited by the wealth of ideas this has opened up; it feels like this work will be productive both in terms of the perspectives on objects and material culture that it provides, and for refreshing my thinking on mobility and space.