All entries for Monday 26 September 2011

Rural Geographies of Gender and Space, Britain 1840-1920 brought together researchers from literature, history and geography to discuss gender-space intersections in rural contexts in the long Victorian period. The symposium theme had emerged from points of cross-over between my work -particularly my studies of women walking- and that of Gemma Goodman, who researches gender and rural space in the context of Cornwall. We found that whilst "women and the city" is a much covered theme in gender-place/space discussions, rural environments are less frequently taken as a specific context in their own right. We thought that the rural offered an equally productive site for discussions and hoped that the symposium would bring to the fore the different types of rural experiences in this period, and diverse approaches to theorising rural spaces. 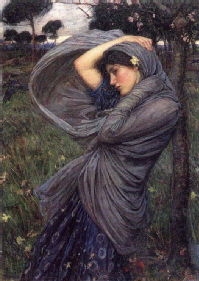 The symposium proved to be productive and stimulating in both of these respects, not least because this was a truly interdisciplinary day: presenters from history, geography and literary studies took us through the spaces of Britain's farms, country houses, gardens, and out to the rural spaces of the empire, from the perspectives of writers, geographers, designers, artists. The day began with a keynote presentation from Jo Little, who is Professor of Gender and Geography at the University of Exeter. Her paper "Feminist Rural Geography: The Development of Approaches to the Study of Gender, Identity and the Countryside" began by outlining the development of gendered rural geographies before focusing on the key areas involved in this study, raising themes that remained prominent throughout the rest of the day. What came through in particular was the importance of the rural in constructing gender identity, particularly due to the stringently traditional, heteronormative values that continue to preside here. This was encapsulated in discussion of the campaign "The farmer wants a wife" which ran in the early 2000s, in which (male) farmers particularly sought women who would understand and were suited to the rural "way of life" - urban, fashionable, made-up women need not apply, as this suggested "flighty" notions incompatible with rural life. The sense of the rural as a "special" space away from the city emerged here too, also explored in Jo's research on "the rural body" which looks at the idea of the rural "transformative" holiday in which mind and body are restored to a "natural" healthiness through health and fitness activities in rural locations. What interested me here was that this "rural body" was a construct for the (urban) outsider entering into this space, a touristic notion to be appropriated rather than a term to describe the bodies of the rural inhabitants themselves.

Professor Little's work is on contemporary rural spaces, but these ideas resonate strongly with our study of nineteenth-century ruralities: the beginnings of rural tourism as a return to nature, the strong sense of traditional gendered roles and heteronormative sexual identities, and the importance of rural labour and class in defining identity, all came through in other papers throughout the day, and, to me, recalled my work on George Eliot's earlier novels. But we also saw ways in which women challenged some of these assumptions and worked to shape their own rural spaces; in the first panel on "Cultivated Ruralities", Emma Gray (University of Bristol) spoke about women's roles in the rebuilding of the country houses Tyntesfield and Dartington Hall, and Christen Ericsson (University of Southampton) discussed Gertrude Jekyll's designing of flower gardens - both occupations were considered outside of the female sphere, and in their undertakings these women could take command over their rural environments and forge an autonomous identity. Di Drummond's (Leeds Trinity) paper on Flora Annie Steel's writing on India moved us beyond British borders, but brought out a similar theme in identifying how Steel's writing shows a different vision of rural India to the male imperial writing of rural space; although often coinciding with masculine perspectives, her writing, such as In the Permanent Way, incorporates the perspectives of Indian inhabitants, producing a variegated vision of rural space. In the same panel, Karina Jakubowicz (UCL) also discussed how rural spaces beyond Britain enable the development of female autonomy, taking an ecofeminist perspective on Virginia Woolf's The Voyage Out which uses rural South America as a space in which the boundaries of gendered roles and sexualities become broken down. Kitty O'Connor also took challenging binaries as her theme in discussion of gender and geography in Thomas Hardy's The Return of the Native and The Woodlanders, terming this a "geography of gender mulitiplicity". The third panel, "Gender in the Field", returned us to British farms and fields. Maija Kuharenoka (de Montfort University) discussed masculinity in Mathilde Blind's "The Teamster", whilst Roger Ebbatson's analysis of Hardy's "Tess's Lament" looked at the portrayal of women in the field - I was taken with a quote describing rural women workers, which stated that "the language of the hay field is not that of pastoral poetry", again conveying this sense of discrepancy between internal and external perspectives on the countryside. Finally, Frances Richardson (Oxford) spoke about women farmers in Nantconwy, looking at the changes in farming practice in this region of Wales throughout the second half of the nineteenth century.

The day concluded with a roundtable discussion in which we drew together - or rather, opened up!- some of the recurrent themes; classed perspectives were of particular interest, with the question of where/whether there is space for the middle class in the countryside, and I was also interested in where/whether there is space for alternative gendered identities and sexualities. These are issues which I'm sure I'll keep on thinking about over the coming weeks; as far as my research was concerned, this provided a welcome change from my current focus on mobility and Dickens, and opened up new ideas for how I can develop some of my thesis work on rural environments. I hope the day was as interesting and productive for those who attended; our next step is to work the papers into a proposal for an edited collection on Rural Geographies, and I'm looking forward to hearing more from our participants in the future.