All entries for Wednesday 12 October 2011

I've been using Google maps in preparing a paper for this weekend's Dickens Day conference, I've been playing around with the "my places" function - I only discovered the other day that you can save places to create different maps. It's been fun creating maps of the locations in a couple of novels I'm writing about (I've just been drawing on print-out maps until now); here are my maps of the places of Bleak House and David Copperfield. 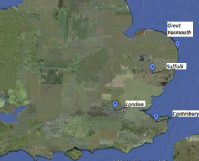 Of course this is just a more hi-tech form of what Morretti does in Atlas of the European Novel, and a starting-point for ideas rather than an end in itself; but it's nonetheless a useful way for stimulating ideas about location and place in individual novels, and indeed for re-thinking, revising, or even complicating initial readings of place.

In Bleak House, for example, it's notable that the significant locations fall upon this linear North-South axis: from London, to Bleak House in Hertfordshire, and up again to Chesney Wold in Lincolnshire; and then directly(ish) down to Paris. A brief excursion to Deal breaks this, but predominantly it's this movement up and down the country that forms the basis of the novel. In David Copperfield, this visualises what I've written about before about the tight, restricted geography of the text.

And in Little Dorrit, this is even more noticeable: London (and the "suburb" Twickenham) is the only English location in the text; this is accompanied by a European narrative, but limiting the text to London locations opens up more questions about the relationship between those two parts of the narrative and how "Englishness" is represented in the text.

I'm not sure yet if I'll be using these maps in the talk itself as my focus is on the movements between these locations; but as I'm looking at how mobility reshapes the space of the nation, these maps provide a useful and concise visualisations of some of the key ideas I'm presenting. This might also feed in nicely to my teaching on the English C19th novel, where we're thinking a lot about place and nation, and (as Moretti's work shows), mapping the places of texts such as Austen's works provides a useful way into thinking about these ideas for the first time.