All entries for Thursday 01 December 2011

"Can you shew me the places?"; Dickens 2012 and literary tourism

As term draws to a close and 2012 gets nearer I've been catching up on the latest Dickens bicentenary news in order to plan a few trips to exhibitions over the vacation. It's particularly interesting noting some of the themes that emerge in coverage: the emphasis on film adaptations is hardly surprising, and neither is the biographical focus around Dickens's life and times. Another theme is that of literary tourism: the association of Dickens and London is central to the cultural idea of Dickens, and it's therefore no surprise that events reiterating the notion of "Dickens's London" feature in the 2012 celebrations. There are events like the Museum of London's "Dickens and London" exhibition which promises to "recreate the atmosphere of Victorian London through sound and projection" or a talk on "Oliver Twist's London". More interesting, for me, are the Dickens-themed walking tours such as the Guardian's audio walks, a podcast to listen to whilst walking a specific route; the latest walk traces the places associated both with the author's life and David Copperfield (Dickens's "most autobiographical" novel, as the website points out).

But what is the purpose of this kind of literary tourism? What does a novel gain from our walking the streets it depicts some 150 years later? A form of connection with author and characters? To reach a new understanding of the textual representation through seeing the "real" thing? Simply a more interesting way of experiencing history?

I'm immediately sceptical and resistant to the connections that this makes between place, text and author; aside from the problems of reading a text as strictly biographical, this understanding of literary place resides in a fundamental misjudgement about both the relationship between real and represented places/spaces. A tour of a text’s locations draws together text and "real" space as though literary place is a neutral reflection of a location, and space is presented as offering some kind of authentic connection to, or reflection of, the text. It also overlooks the slight problem of history: how do we read contemporary space as indicative of the past? What does it mean to search for a text's meaning in a place over 150 years later?

Nonetheless, there's such cultural importance around the notion of Dickens and place, and an attraction in "experiencing" that place in some way, that it's worth thinking more about why this is so resonant today.

I've been thinking about the urban tour recently in my work on mobility in Bleak House: one of the central moments of the novel sees Jo, the poor street boy, leading Lady Dedlock to view the places associated with her long lost, and now deceased, lover:

“Are you the boy I have read of in the papers?’ she asks behind her veil. […]

‘Listen and be silent. Don’t talk to me, and stand farther from me! Can you shew me all those places that were spoken of in the account I read? The place he wrote for, the place he died at, the place where you were taken to, and the place where he was buried?’” (p. 261) 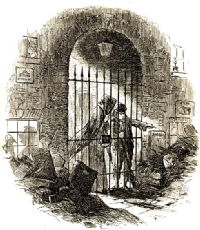 In the passage that follows there are strong resonances with the urban tour and, more specifically, with the literary biographical tour: Jo takes the role of paid guide as he leads Lady Dedlock through the streets to view the places associated with another’s life. A strong connection is forged here between place and knowledge: this passage doesn’t offer any new information to either characters or reader, but the tour serves to affirm the connection between Lady Dedlock and the dead law-writer. For Lady Dedlock, the walk brings her back into a connection with the past and into understanding of a history she hasn't experienced. It is a locational, place-bound knowledge which has to be experienced and the act of walking the streets serves as a reiterative act that reawakens old thoughts.

Biographical literary tours perhaps offer a similar kind of knowledge and knowledge-gaining process: reaffirming an idea we already have (e.g. the notion of Dickens's London) which somehow seems more valuable in the physical act of experiencing that place. There is, perhaps, a (perceived) value in experiencing place, a sense that being in a place serves to reinforce abstract knowledge. In an insightful post about a recent Dickens discovery, Amber Regis reflects on the value of material objects in biographical readings: the objects offer, she writes, "an insight into the life narratives that emerge from, and are constructed by, material objects -- human interactions with objects, and the crafting and shaping of objects, become a form of storytelling". I think there's a similar process in literary tours of crafting and constructing a narrative through human interaction with place; the city is experienced like a material object, giving the idea of Dickens and London a physical manifestation in the city streets.

But Dickens's use of mobility in Bleak House also points us towards a possible wider cultural resonance inherent in these ideas: national identity. In Bleak House, acts of mobility serve to reinforce the idea of nationality, solidifying an abstract idea in a concrete experience of the physical space of the nation. Literary tours perhaps serve a similar purpose: after Shakespeare, Dickens is arguably the author we most strongly associate with English culture, and the urban literary tour serves to reiterate this connection in terms of national space, investing specific sites with national cultural meaning and thus giving the idea of Dickens as national symbol a physical manifestation in place. More than offering any illuminating ideas about the text or author, the literary tour ties both to the places of the nation as a way of locating and strengthening a cultural idea, and of investing the "space of the nation" with (national) cultural meaning.