Tony Banks, 'man of the people'?

The obituaries of Tony Banks, or Lord Stratford as he's been more recently known, have described him as "forthright", "a firebrand" and "a man of the people". But I wouldn't use any of those words to describe him.

One of the few useful things about death is that the laws relating to libel and slander don't apply any more. 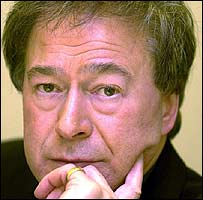 So I can say pretty much what I like about him, and make accusations that he can't refute.

Not that he could refute certain allegations at the time. You see, back in 2002, myself and a few friends were at a conference in Paris, where Tony Banks was speaking alongside people such as Michael Howard and Simon Hughes (a very nice man, by the way, shame he won't be Lib Dem leader).

After the conference, we bumped into Tony and my friends began talking to him about fox-hunting (they're active hunters, I'm broadly anti). They challenged him about his views of fox-hunting, saying that he didn't understand rural issues.

Before storming off in a huff. I wouldn't say my friends took a particularly aggressive tone, so his response was something of a shock. And given it was at a conference of sixth-formers, it was pretty inappropriate.

By the way, he couldn't have refuted the allegations at the time, because we'd been filming him. Whoops.

As if that wasn't bizarre enough, my friends took the decision to leak the video to the Daily Mail. As you do. We were told later that they couldn't print the story (despite wanting to) because he had threatened to take out an injunction against them!

Telling the Daily Mail may have been one of the most ridiculous things I've ever been involved in, but Lord Banks' behaviour in Paris was pretty bad considering who he was talking to. However his later actions just made us think he was slightly self-important and downright weird. So I have to say that my personal experience of Tony Banks wasn't one of him having "a sharp and witty tongue" (David Mellor) but of having a foul and offensive mouth.