All 5 entries tagged The West Wing

Breaking from the script

I thought Barack Obama was supposed to be The West Wing v.2? I mean, he even appointed Josh Lyman as his Chief of Staff.

Now he’s got elected, the script’s got jumbled up.

Come on, neither Jed Bartlet nor Matthew Santos were centrists, but they knew full well the adage that governments don’t create jobs, businesses do.

Has the U.S. gone socialist overnight?

One hit does not equal a franchise

The past couple of months have shown that writing one incredible television show does not forever make you a television genius.

My case studies are the best show ever committed to television – The West Wing – and its poor imitation, Studio 60 on the Sunset Strip, which is facing imminent cancellation in the United States. 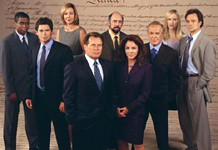 Both are written by Aaron Sorkin, both are about the inside workings of a powerful empire, they share much of the cast and crew and are filmed on the very same acreage.

Yet Studio 60 has been a fairly colossal flop considering its production costs.

There are two reasons for this. One is that the premise didn’t work. Television executives aren’t sexy, no matter how hard you try to make them so. They are simply arrogant. Pretending they are high-minded, literate and well-versed in the classics does not make for good drama.

And secondly, you cannot repeat the success of one television show simply by reusing the same scripts. All of the cliches from The West Wing (especially walking-and-talking) have been used to death in the first six episodes alone. When it’s in the halls of the most powerful building on earth, it’s forgivable. When it’s a television studio, it’s not.

Inevitably when the show is cancelled, Sorkin will claim it’s a victory for commerce over art. But it’s not.

As much as I want to love this show – the cast is brilliant and the dialogue pretty good – the drama is simply implausible.

I suspect Sorkin will decide not to go near network television for a good few years. But can I suggest to him a new subject matter that could be right up his street, and might just get people watching?

Brace yourself TV connoisseurs of the world… The West Wing is to end. NBC have announced that Season 7 (currently showing in the United States) will be the last, ending with the election result.

Also, the death of John Spencer will be dealt with when his character dies just five days before the election, meaning he can't be taken off the ballot. But what affect will it have on the result?

Personally I'm going to be devastated when the series ends. It'd damn well be the best episode they've ever made, with a full-blown send-off for all the characters. Hey, Josh and Donna might even get together!

But at the same time, it's good that the show is ending now. A second life, with (presumably) Santos as President, just wouldn't have worked as well as the Bartlet years. The writing had become slacker, the direction slower and the freshness had just worn off. It was also becoming occasionally over-patriotic.

If you're still on UK-time, then you'll have a long wait before the end arrives. But for anyone 'acquiring' The West Wing as it comes out in the United States, you've only got 11 more episodes, so make the most of them!

Any fans of The West Wing will be upset to hear John Spencer, who played Leo, died of a heart attack this evening. Ironically, his character had a horrific heart attack in the last series of the show.

Who knows how they're going to continue the show without him? He'll be very sorely missed.

The West Wing returned to US screens on Wednesday after a 6 month break. If you're not familiar with the West Wing, then get your nose out of your Computer Science text book and join the fun. Not to be confused with Green Wing, a new Channel 4 comedy which looks like turd, The West Wing is NBC's Presidential drama set in the White House of President Josiah Bartlett, an idealist that makes Noam Chomsky look like a hawk.

Created just prior to the 2000 'actual' US election, creator Aaron Sorkin decided on a lovely airy fairy liberal to run the dramatised US, which actually was probably the way to go. Try as hard as you like, it's just that much harder to empathise with Republicans. Not only are they more hard-nosed than their Democrat opponents, you just can't see them getting a bloody nose from the other side.

Series 1 set the scene of America dealing with all kinds of complicated legislation spoken about at 60 words a second, along with the character dramas (alcoholism, unrequited love) which kept it feeling real. It ended on a cliffhanger with an assassination attempt that nearly succeeds, and from then on The West Wing was somehow urgent, scared, introverted and pacey. Quite frankly, it was great.

3 consecutive Emmy awards later, and The West Wing took a bit of a jolt. Aaron Sorkin, who had written virtually everything for the first 4 years, announced he was leaving. In to replace him came John Wells, head of another NBC drama, ER. Unfortunately, this led to a bit of a soap opera, as medical emergency followed political emergency until the White House was in a permanent state of chaos. And so at the end of Series 5, broadcast earlier this year, one main character was on death's door, another minor character was dead and buried, and Bartlett was being persuaded by all his advisors to nuke the Middle East (well, nearly).

So Series 6 brings us to a bit of a turning point. Sadly artistic licence only goes so far, and Bartlett really can only serve two terms, which are nearly up. Wells and his team are having to think 'what next?' in terms of the series as a good story, and as a continuing ratings success. Ratings, incidentally are well off what they were in the first two years when TWW was one of the top two dramas in the US. It's now second just in its timeslot.

The immediate answer is to shake up the characters, with major upheaval planned in the next few weeks. Bartlett's right hand man, Leo McGarry is somehow going to be written out of most of the season (illness or a return to alcoholism are the expected reasons) and CJ, the brilliant press secretary is stepping up to No.2. This is somewhat strange, as she's probably about fifth in line, but episode one of the new series saw her as one of only two people backing the President's attempts to get peace in the Middle East. CJ is a great strong character played by Allison Janney (American Beauty), who is probably one of the most underrated actresses in the US (and that's after the Emmy awards).

Other characters get shifted around, and there's a new Press Secretary and Personal Assistant to Bartlett coming into the show later this series.

But on the long-term front, Wells has brought in two American heavyweight actors who are expected to be the Bush/Kerry that scrap it out after Bartlett. One is Alan Alda (ER, Mash), and the other is Jimmy Smits (NYPD Blue or something like that). One republican, one democrat.

But there's a third winner in the inevitable election. And that's the viewers. Critics are fairly unanimous that The West Wing is off top form now, and that bringing in a whole new cast is unlikely to fix the problems with the writing and plotlines. So this third outcome would see the show, as well as Bartlett's presidency end. And to be honest, it's probably the right decision. As much as US TV networks love to create spin-off shows (Law and Order having numerous spin-offs), The West Wing is a slightly different kettle of fish.

British viewers may never find out though. Channel 4 don't really care much about the series any more (Series 4 is up against EastEnders in case you missed it in the schedules) and ratings here are slipping massively. The DVDs are up to Series 3, and so Series 6 seems a long way off. Without wishing to condone criminal activity, perhaps the only way we're going to see Series 6 onwards is through alternative channels.

Series 6 looks great so far – episode one was snappy, dramatic and tense. But the writers can't keep it up, and even if they could they're risking turning the show into a cop drama, with Bartlett as Chief and the rest of the world banged up to rights every episode. It's just time to admit that the show is over the hill, and its legacy will last longer if it's put back to bed soon.