Yesterday, Tony left the stage. Today, Gordon enters stage right (or left?). He’ll be announcing his candidacy in a few minutes time at the ‘Imagination Gallery’ in London. Will it be as fluffy as Tony’s speech was, or will he actually say something new? We’ll see.

10:56 A girl on BBC News 24 has just made thousands of Labour students look very very daft. Apparently Gordon Brown will be “a new face”...”he hasn’t run his own show before”. Not sure who she’s got Gordon Brown confused with. Now she’s talking more vacuous nonsense. Get her off.

10:57 The weatherman’s excited. He’s just told us it’ll rain in East Angular. I didn’t know Jade Goody had a new career. And a sex-change.

11:00 Anyone want to place a bet on Gordon announcing he’s creating a new Super Home Office, incorporating the police and justice functions in one department? No, didn’t think so.

11:02 Do we think Gordon is ‘bovvered’ whether Tony endorses him or not? It’s all a little late now, isn’t it?

11:04 How much does graphic design tell you about Gordon’s campaign? In the backdrop – presumably the motif for the next seven weeks – is a blurred Union Jack with: “Gordon Brown for Britain” written in a fancy modern font. Very British Airways. Not Blairways.

11:10 Blair’s the ultimate conviction politician, right? He could give a speech telling us that the sun was blue and some of us would believe him, right? Well why is his endorsement of Brown so stuttered, so unbelievable, so carefully worded that it’s fairly apparent he doesn’t mean it. Is he deliberately trying to trip Gordon up? Iain Dale said the same thing.

11:11 Brown’s being introduced by a well-spoken twelve year-old girl. And there’s a major logistical cock-up. The autocue screens are in the way of the cameras.

11:13 “Today I announce I’m a candidate to lead the Labour Party and a new government”. Didn’t see that coming.

11:14 “Britain is a great country that can become greater still”. Not very on-message. Blair said we were ‘best’ yesterday. 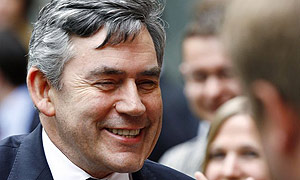 11:15 A little more substance than Blair yesterday, but we still can’t see his face.

11:16 “Your priorities will be my driving purpose”. Does that mean he’ll run a government by plebiscite?

11:17 Ah I see how he’s going to be driven by ‘our priorities’. He’s going to tell us what they are. So far, no answers as to how though.

11:18 “The way we must govern must change too…When you fall short, you listen, you learn and then are confident enough to set new priorities…For me, this starts with governing in a different way”.

New Policy: Greater power to Parliament. A code of conduct for MPs and Ministers.

11:19 I tell you what, I wasn’t expecting this. I’m actually impressed. I actually think he could win the next election. He also looks a little bit younger – maybe because he’s not talking about economics.

11:21 He’s going to engage on a big tour of the country, finding out what people want. Tony Blair did the same thing a few years ago, calling it ‘The Big Conversation’, but it got canned soon after being announced.

11:23 “I’ll lead a government of all the talents” – Erm, is he suggesting a cross-party cabinet or just using fancy words? (Newsnight’s Political Editor, Michael Crick, asked Brown to clarify this later: Brown says he’s ruling nothing out. Lord Ashdown for the cabinet???)

11:24 A draft Queen’s Speech will be announced over the Summer, to allow for public consultation. It sounds new, but it’s basically a non-election manifesto.

11:25 “I will listen and I will learn. I want to lead a government humble enough to know its place… on people’s side.” And that’s it.

11:27 Fourteen minutes – a bit shorter than Tony Blair was yesterday. Questions from the media now. Nick Robinson threw him a fairly easy one.

11:28 “You can’t meet challenges merely by legislating” – erm… I thought legislation was what government was for? Will the Brown era be government as pressure group?

11:29 Ah, that’s more like it. Adam Boulton throws him a tougher question about Blair. Jack Straw won’t reveal how many nominations Brown has, but Brown quips he got at least one this morning – from the incumbent.

11:35 Tony Blair seems to be trying to bury bad news. He’s over at Wembley Stadium opening his legacy.

So he gave us one policy to chew on for a while – increased powers for parliament. He’s not been specific, but I think he might mean Parliament would always be given a vote on whether to go to war. The end of Royal Prerogative, perhaps?

He also promised a consultation on the Queen’s Speech. While this sounds fantastic, it’s merely Brown’s attempt to seek a mandate without having to go through an election. Just like the consultation that goes before a manifesto, without the vote at the end.

A well-judged speech, I thought. Within a few months he might just seem Prime Ministerial.

And what did I think?
I thought it was a pretty good speech, with some very welcome passages on civil partnerships which didn’t go down very well with some of his audience. I don’t blame him for not coming up with any policies yet: he knows Brown will only steal them in 2007. True, he has a lot of style, but the lack of substance is excusable this far away from an election. It’ll be interesting to see whether the policies he eventually unveils strike a chord with the British public.

What might worry people isn’t Cameron, but the people behind him. From the leaks and drips, it sounds as if many within his own shadow cabinet have quite different ideas about how the country might look in 2009/10. Rumours of ‘unlimited privatisation’ in the NHS and mixed messages over Jamie Oliver’s school meals campaign suggest that unless the party unites behind Cameron, we won’t have a clue who we’re supposed to be voting for at the next election.