This book is coming out in a couple of weeks. It should be quite good. I wrote some of it. Planning their own funeral?

Having picked up both houses of Congress, the Democrats are pondering how far they should go in creating a new law against corruption. On the one hand it’s a clever idea – a piece of legislation that Bush won’t be able to veto. But they’re also starting to appreciate that if they screw things up, they’ll get beaten over the head with the very legislation they called for.

Initial proposals, which included a ban on politicians accepting gifts from lobbyists – you mean that’s alright at the moment?! – are being debated vociferously by Democrats after their victory in the Midterms. Barack Obama, the Illinois senator who is tipped for great things, believes the strong mandate from the public means they should go even further in making U.S. politics less corrupt. But others have rejected the idea of an independent watchdog, arguing politicians – and especially nice, clean Democrat ones – can regulate themselves.

It’s a touching proposal, but ultimately nonsense. Those who oppose such measures may as well be holding up their hands and saying “Don’t do this or my hands will get burnt!” For those whose hands are a little close to the fire, there must be plenty of nervousness that in creating tough legislation to stop sleaze, they’ll end up building their own highway between Capitol Hill and a jail cell.

Things are a–changing on t'internet. It all began at the weekend when it was revealed in the Daily Mail that Cherie Blair/Booth had signed a copy of the Hutton Report (you know, that one into the death of Dr David Kelly), for auction – the proceeds of which would go to the Labour Party.

Regardless of your political persuasion, the move was grossly stupid, if not downright tasteless and insensitive. It's a bit like signing the will of a man who people close to you were (unintentionally) responsible for the death of. Pretty sick.

But the story went quiet for a couple of days, except on the 'blogosphere', where it very quickly became a big deal, predominantly on Conservative blogs, but on some non–partisan ones too (if I hadn't been revising I might well have blogged on it!).

And the interest online has made a huge difference. It's now slowly creeped up to the third biggest story on the BBC's Politics website (bear in mind that the Home Office debacle and the Education vote are one and two), and has made headlines in every single newspaper since yesterday.

It's not too much of a stretch to suggest that the blogs turned the story into a big issue and caused great embarrassment to those involved. I suspect it wouldn't have been raised at PMQs today if it wasn't for the online involvement.

Iain Dale, and Guido Fawkes, editors of the book I contributed to, have done much to push the scandal onto a wider audience.

Does this mean we are starting to see a real evolution in the media where people not employed by any media organisation are playing a big role in deciding which stories enter the public consciousness?

Particularly, with British political bloggers leaning very definately to the right, are the Conservatives going to find themselves given an easier ride by a blogging community which is largely in support of them, and who have no rules about bias to adhere to.

It's a tricky situation for journalists to deal with. Not only are they finding themselves beaten to stories by people who aren't under the same pressure to get exclusive stories, but they're going to have to be careful in ensuring that they don't take blogs necessarily at face value. Even those which claim to be non–partisan (perhaps including my own) are highly likely to have political views which shape their writing. And while hundreds of blogs may be united in their criticism (see above), that doesn't mean that there isn't an inherent bias in the blogosphere as a whole.

It seems clear to everyone that the scandal involving Cherie is a dispicable act which demonstrates a complete lack of political sense, not to mention plain manners.

But as the blogs gain influence, journalists need to be wary of who is doing the talking when anonymity is so freely available to those on the internet. Future stories emanating from the internet may not be so factual. 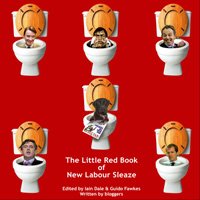 So here's a quick story…

I've written a bit (3% to be precise) of a book which is coming out in just over a week. It's called The Little Red Book of New Labour Sleaze and is about (you'll never guess!) Labour sleaze since 1997.

Granted, this has caused me ideological issues, but the promise of money and fame (joke) has made me do it.

Waterstones have bought 1,500 copies of it to sell, and it really is perfect coffee table/toilet seat reading.

The Guardian have already called it: "an impressive litany of 100 or so scandals " and said it'd make a perfect birthday present for John Prescott.

And the Sunday Times said: "If Tony Blair is wondering why the local elections went so badly last week, this book will explain all."

So grab your copy now! It'd make me very happy, and you never know, might pay off some of the student loan