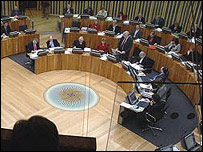 Welsh politics is in a bit of a crisis at the moment over its budget, and is looking to Gordon Brown to solve it when he announces his Pre-Budget Report.

The Labour leadership in Cardiff say there’s no more money to be spent on education or health, but the opposition parties are refusing to sign off on the budget before they find some.

So they’re looking to Brown for more cash.

But there’s personality politics at play. First Minister Rhodri Morgan is regarded as little better than a Liberal Democrat by Brown and Blair, and know that if they refuse to help him out, they might be able to get rid of him.

Let’s see whether Gordon’s in a helpful mood.

Update: He was feeling relatively cheerful, but hasn’t done enough to get Rhodri completely out of trouble. He scraped to an extra £9m.