'This is the greatest nation on earth'

I can tell you what a number of newspaper op-ed pieces will ask over the next few days: Is this the greatest nation on earth?

You wonder if he’s been caught up in the euphoria of leaving one of politics’ great offices, knowing there’s more chance of him getting a Sainthood than becoming UN Secretary General.

But you also find yourself wondering if he’s right. We’re not a nation for posturing. “We’re best” almost seems to be an unfashionable, American motto, but it’s not a notion the British are very comfortable with. A Kiwi colleague of mine laughed when he heard Blair say it. No-one in the room defended our PM. But no-one vocally disagreed with him either.

New Zealand and Canada are two countries who always seem to be in with a shout of being a ‘nicer’ nation than Britain. Given the cultural and language similarities, many of us have probably thought for at least ten seconds about moving there for a while.

And you can hardly blame many of them for thinking they’re better than us. Just look at Johnny Foreigner – our ambassador in T-shirt and shorts, wearing sandals with socks on, and drinking a can of Stella in countries where they actually brew their own lager.

Weakening our claim for ‘best nation’ status is our lack of nationalism. The Union Jack has been hijacked by racists, our cultural institutions seem to acknowledge their continental equivalents are superior, and few of us seem to know what it means to be British.

It’s ironic that Blair believes we’re the best, when if most people were asked, they’d probably say it was he who had made it worse. But outside of politics, is there much that is completely and deep-seatedly wrong?

We are, perhaps, the most upwardly mobile nation on the Earth, and yet few of us try to leave, to try bigger and better things than Britain alone can offer. Is that lack of imagination or satisfaction with what we’ve got?

It’s unnaturally patriotic for most Britons to suggest, but is it true? Is ours the greatest nation on earth?

I’m not sure. But I know I wouldn’t want to leave. 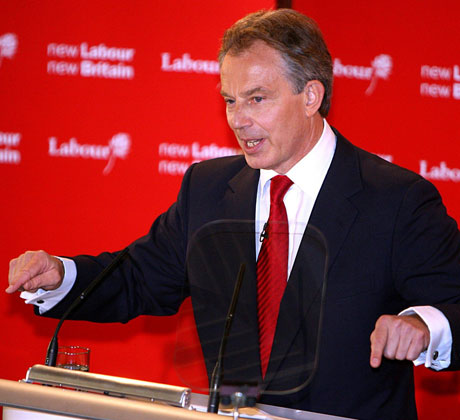 So, he’s going, and it might be even sooner than we thought. The atmosphere at Trimdon Labour Club is pretty hysterical – there’ll probably be tears and there’s already dancing by one woman. Nutter.

11:57 Philip Gould, Blair’s polling expert, is ignoring the idea of “lowering expectations”. Apparently after this speech the whole country will be moved, and start to wonder what we’re missing out on. Wishful thinking, I think. Intriguingly he says: “I think people will be surprised”. Ten more years! Ten more years!

11:59 Anyone know how many people are allowed in Trimdon Labour club according to the fire regulations? I reckon they’re on the upper limit.

12:01 Caption of the morning was on BBC News 24: “Blair: Today is a special day”. Someone suggested there might be 26 hours or something.

12:05 And here’s the shock announcement: He loves Cherie. Nope, that’s not it.

12:06 “Today I announce my decision to stand down from the leadership of the Labour Party… On the 27th of June [Wednesday] I will tender my resignation… I’ve been Prime Minister for ten years – I think that’s enough.”

12:08 “I was born almost a decade after the Second World War. I was a young man in a social revolution. I reached political maturity as the world was ending and the world was going through a revolution. I looked at my own country… strangely uncertain of its future. All that was symbolised by the politics of the time. You stood for individual aspiration and getting on in life or social compassion and helping others. You were liberal or conservative. You believed in the power of the state or the power of the individual. None of it made sense to me. It was 20th Century ideology in a world approaching a new millennium.”

12:09 In my opinion, he’s done better speeches than this before. It’s better suited to a Labour Party Conference than a small hall of 300 people.

12:10 “No country attracts overseas investment like we do”. I think China would have something to say about that. And they wouldn’t be alone.

12:11 “Britain is not a follower. Britain is a leader” – So far, the tone’s been fluffier than a set of furry dice.

12:13 Blair’s bearing his soul to the country now. How he put the country ahead of himself, and sometimes even his party.

12:17 He’s moved on to talking about Iraq, terrorism, and how he had to make the decisions he did.

12:20 “I’ve been very lucky and very blessed. This is a blessed country. This is the greatest nation on earth” – he’s saying things he daren’t have said before.

12:21 And his last words? “Good luck”. That’s it. Less than eighteen minutes. His conference speech last year was probably a little more emotional, but in this one he really showed his colours.

ITV have scheduled an exciting episode of Emmerdale Family Album this Thursday at 7.30pm.

Why Blair Should Go

his record after nine years in office is one of extensive failure, with the NHS in crisis, the schools in crisis, the police in crisis, and even the Downing Street cat (retired) dead.

Simon Heffer appears to be living in cuckoo-land, as my labrador-like nose doesn't detect crisis anywhere, although there is mild concern over the state of the NHS.

And I don't agree with the article from which that excerpt comes from. In it, he argues that Tony Blair should be kept for as long as possible, because the alternative can (not in the words of D:Ream) "only get worse".

He says that the Soviet-like Ed Balls and David Miliband (I think he means Ed Miliband) have no understanding for the real world and have only a thirst for power. Regardless of the confusion over David/Ed, David Miliband is well respected in a number of circles, including the teachers who he impressed with his level of interest and knowledge when he was a junior minister at Education. So his understanding for the real world seems just fine for me. And Ed Balls is a former Treasury hack. And since when were economists expected to have a grasp of the real world!?!

But his basic premise is wrong. In fact I suspect he only wants Blair to stay because it would benefit the Tories.

Events in the past week suggest to me that Blair should go because he has lost one of the only two qualities he has ever possessed: leadership. (The other being charisma).

On his World Tour (i.e. Asia + Australasia), Blair has tried to carry people with him on climate change and terrorism. But on both issues, there is a huge lack of trust, respect and belief. Notably on climate change, Blair has lost the credibility he had by following Bush down the line of 'technology' this and 'technology' that. The technology is there – from domestic wind turbines to solar power to biomass. What is lacking is the political leadership and bravery to bring these potential sources of energy to the masses.

When Prescott drew up his guidelines for housing planning over the next decade, environmentalists were appalled at the lack of commitment to domestic-based energy generation.

Why, oh why isn't the government pushing (and by pushing I mean implementing, not sounding off about) small-scale, community-based energy generation? Why isn't there legislation on the agenda to use rainwater to flush toilets? And why isn't government investing money in new methods of powering our cars?

I think it's because Blair thinks the market will provide everything. But he has overestimated the demand amongst the public. For our energy needs to be sorted out once and for all, our leaders need to shove the reality in our faces and enable the early-adopters to move forward.

Instead, there is practically no government support for initiatives that would make a big difference when it comes to community energy generation.

On this issue as with many others, Blair is providing rhetoric, but doesn't have the leadership to carry people with him. Contrary to what Simon Heffer is saying, the only people who are in touch with what the people need are those such as Miliband and Balls, whose focus on the community should be applauded and pushed towards Number 10 faster than is currently happening.

Blair should step down not because of Iraq, loans or any other single issue, but because he doesn't have the creativity of a leader, and nor does he have the influence.