So the sports correspondent, Garry Richardson, is reading the sport on BBC Radio 4. He’s still on the top story – the cricket umpire Daryll Hair’s accusations of racial discrimination by the ICC – when his phone goes off..

Probably not the first time.

But not only does he have the CTU ringtone used by Jack Bauer, he answered it live on air to see if it was Daryll Hair.

Of course it wasn’t.

Brilliant. As my sports-geek friend Paddy said, it doesn’t do much for the reputation of sports journalists. But then it can’t get much lower, can it? 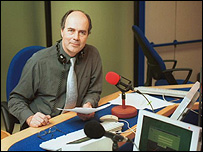 It's enough to make you want to become a journalist. In today's entry, Eddie Mair described what was going on outside his window (until being told to do some work). Yesterday, Eddie noted he couldn't think of anything to say. And on Friday he reassured us that journalists would fight tooth and nail to get the whole story:

If we were journalists of any merit we'd phone Serge to get the answer. Don't hold your breath.

Brilliant. But I'm undecided as to whether it's better than StoryFix.