Harriet Harman, the Minister for Women, has criticised Muslim women who wear veils. This shouldn’t surprise us. Why?

These two facts are connected and last night’s Ten O’Clock News on the BBC was interesting in this respect. Nick Robinson’s lead report (watch it) was about a number of stories, all pulled together. It was at the top of the bulletin largely because Nick had an exclusive interview with Gordon Brown, and that was because Brown was giving a speech on a range of domestic issues. Nick raised the Muslim veils issue in order to ‘peg’ it to the BBC’s news agenda for the day.

But Gordon Brown knew what he was doing by agreeing to comment on the issue. He knew it would get him the lead item on the ‘Ten’, which helps him in his bid to be Prime Minister. Nick was complicit in this, and that’s the way the machine tends to work.

Harriet Harman is playing exactly the same game as her friend Brown. No one really cares what the ‘Minister for Women’ thinks. She’s not a great moral leader or a role model. But she’s happy to play on people’s fears about Muslim veils in order to get herself on the news. I’m not sure whether to blame her or to blame the system that she’s operating under, but if studying Politics at Warwick teaches you anything, it’s that systems and institutions are ‘sticky’, but should be open to challenge. It’s a shame that Harman didn’t challenge the system by refusing to answer the question and prolonging the debate.

Never seen in the same place. 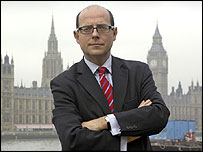 It's only been online for about a week, and already it's my favourite bit of t'internet.

What am I talking about? Nick Robinson's blog. He's the Political Editor of the BBC (like Andrew Marr, with less ears) and once or twice a day he fills my world with all the political hackery I need. It's what he would say if his live reports on the 10o'clock news weren't only 30 seconds long. And he's not bothered about playing to the mainstream audience. Which makes it perfect for politics geeks such as myself.

P.S. This blog entry should not be seen as sucking-up in case I ever get a job interview at the BBC, and they Google me…