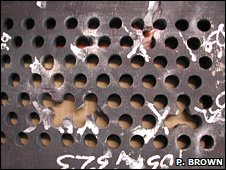 Two sides to every story?

Are there two sides to every story?

But what interests me more is whether Mr Bell (former journalist and MP) cares that for every British soldier that is killed in Afghanistan, many many more Afghans may have been killed in the firefight?

Evidence comes from Sunday Times reporter Christina Lamb, who while embedded with British forces in Afghanistan came under attack, and saw perhaps 25 Afghans killed in the process. But the deaths of those people went relatively unreported.

The same is happening in Iraq, where according to one NGO around 40,000 Iraqi "civilians" have probably been killed since the invasion began. Yet the number of US or British soldiers killed in Iraq is much more widely known (around 2500 and 115 respectively), and every milestone that's reached gets hours of coverage.

Similarly, in Palestine, around 4000 Palestinian citizens are thought to have been killed since 2000, although the number of Israeli deaths are thought to be far fewer (perhaps one–tenth the amount). Here again, suicide bombings are more widely reported than children killed at checkpoints.

Regardless of the rights and wrongs of either side in any dispute, it seems clear that while there are two sides to every story, the reporting of each side is rarely balanced. And this very probably impacts on the way in which the story is interpreted by the public.

Another question is: how many deaths constitute a 'tragedy'? In the case of the London Bombings, it's clearly well under fifty (in fact IRA attacks which have caused no injury have received proportionately large levels of coverage). But in battles where we could perhaps be seen as the aggressor, the deaths of those on the other side are diminished by their under–reporting. Certainly, they may be harder to hear of, but websites such as Iraq Body Count prove that collecting such figures is possible, and they do most of it from newswires.

But for some reason, those newswires are being ignored by newsrooms who don't want to tell the British public about how many people our forces have killed. Even esteemed journalists such as Martin Bell seem to be more concerned by British servicemen's deaths than the considerably larger number of Iraqis and Afghanistanis who probably died on the same day.

The United States has moved its ground–based interceptor missile defense system from test mode to operational amid concerns over an expected North Korean missile launch, a U.S. defense official said on Tuesday.