I’m still not feeling the Arctic Monkeys. They might have won the Mercury Prize, but I still feel an in-built aversion to them.

Something about them doesn’t seem very original to me. Ignore the lyrics and everything else could have been written 20-30 years ago. The only thing they seem to have going for them is that they’re young. Well good on ‘em, but in my humble opinion kids that age ought to be a bit more creative. 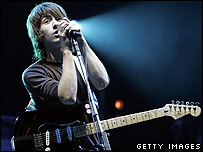 All of the reasons given for their win this evening could have been translated (without much effort) into “They’re the band who’ve had the most hype”, which for me isn’t a good reason.

I know I’m gonna get random Google-oriented abuse from 12-year-olds (and probably plenty from the more cultured reader of my blog), but I’m still not won over by their music. Sorry.

P.S. Since you ask, Thom Yorke, Guillemots or perhaps Hot Chip should have won.