Prescott: The media might have it wrong, but he should still go

Got an unusual e-mail from the Evening Standard yesterday asking me to write them something about John Prescott's latest travails. Bashed out 200 words and they rang me asking for more! The image on the right is the version that they printed, while below is the original. Thanks to Jimmy and Adam for advice on the first drafts! Here's the article in full:

John Prescott’s authority has evaporated. If he’s no longer trusted to speak in front of his own party at this year’s conference, how can he be expected to command the respect of the country while deputising for Tony Blair?

As politics looks to a new generation of leaders and ideas (with the exception of the Lib Dems), the Deputy Prime Minister is putting the brakes on the renewal which the Government must undertake if it is to hold on to a majority in 2009/10. His bumbling persona and the misjudgement he’s shown over the past months suggest that someone who’s credited with keeping the cogs of the government well oiled would perhaps be better off putting his talents to use on a model train set.

Beneath each revelation about Prescott there’s the smell of something else going on. Rumours of further affairs continue to abound on the internet, and his explanation for the free gifts received from Philip Anschutz lack credibility, making him a continued liability.

His fate will depend on whether the media think his many errors of judgement are affecting his ability to do the job properly. The media's coverage of Prescott has in many ways been unfair. The Sunday newspapers in particular have thrown around allegations without much foundation, and there's a danger of Prescott's demise all becoming an in–joke amongst political journalists and commentators.

But the fate of Prescott should be of wider interest beyond the tittle–tattle. The current housing crisis has, for nine years, been Prescott's responsibility and he's demonstrated no ability to fix the problem which is set to leave a generation of people unable to buy their own home. Similarly, the Conservatives have pulled ahead with new ideas on the environment because Prescott's ineptitude gave them so much space in which to work. The torrent of accusations and revelations make it very likely that Prescott will go soon, but his performance as Deputy Prime Minister should be reason enough to give him the boot.

The newspapers seem certain that John Prescott's days in office are numbered, and despite there being no smoking gun, they've not been afraid to put the boot in.

The Mail on Sunday comes the closest anyone in the mainstream media has to confirming Prescott had an affair with fellow Labour minister, Rosie Winterton, with a two–page article on the influence Winterton has had on Prescott's career.

Read between the lines of the 'profile' piece and you get the idea of what's been going on:

Note newspapers only refer to women as 'Ms Anything' if they're involved in something.

Her loyalty has been richly rewarded.

She is proud of her trim figure and keeps her tan topped up through the winter. Her short skirts and knee–high boots have raised some eyebrows, but her fun–loving manner has made her popular on all sides.

And about John and Rosie:

"They've always been special friends. They get on tremendously well and she knows how to handle John"

Commons observers couldn't help but notice that Tracey Temple, the secretary with whom Mr Prescott conducted an affair, bears a certain resemblance to Ms Winterton.

Other than these highly subtle references to how well they get on, it's only in the last paragraph that the newspaper goes for the bleeding obvious:

Asked if she had had an affair with Mr Prescott, Ms Winterton said last night: "Absolutely not".

Knowing the rumours, the piece is hilarious to read as the puns, metaphors and allusions come thick and fast. It won't have any impact on Prescott's chances of keeping his job, and to be honest isn't really very interesting (it's more of a Westminster in–joke). But the revelations in other newspapers, while small, are keeping up the pressure on Prescott and will quite probably bring his Deputy Leadership to an end this week.

David Miliband and Jack Straw have been suggested as interim replacements (until the Party Conference in September). But if Blair wants to take the heat off his government's incompetence, he'll have to switch Prescott quickly, or else today's subtle allusions will become full–on allegations next weekend.

Why the Right need to calm down about Prescott

Right–wing bloggers (see here and here) are again baying for John Prescott's blood over his trip to the ranch of a US millionaire who wants to build the UK's only super–casino at the Millenium Dome.

They've also dragged the BBC into it, saying they've ignored the story and would have caused a big stink if it had been a Conservative politician.

In both senses, they're wide of the mark. The 'story' is just speculation at the moment. It doesn't look enormously great, because there was a "potential" conflict of interest, although it's 1) only potential at the moment and 2) apparently weaker than first appeared because Prezza didn't have any say over Casino policy. He also claims he was on official business, which if true, puts a different spin on the story.

Nick Robinson has taken some heat for saying the BBC's held back on it because there didn't appear to be a definite story in there – more speculation than anything else – and criticised bloggers for being slightly lazier with the truth than paid journalists.

He's right, but his tone was perhaps a little obnoxious. Bloggers are, by and large, influenced by an agenda which journalists tacitly subordinate when they take up a job (especially a politics–related one), but journalists can learn some things from bloggers. Mainly, the 'blogosphere' helps bring stories to people's attention (see Cherie's signed copy of the Hutton Report for one), but also delivers stories at a faster speed.

Sadly speed often comes at the price of accuracy, and in the case of political blogs, seems to come increasingly ahead of objectivity. So while the number of blogs should be applauded for the likelihood of someone picking up on a story quicker than one guy sat in Whitehall, they should also learn a little from real journalists if they want to be seen to be playing a similar game. 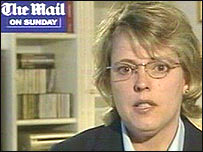 Tracey… stop whinging love. You should have known better, and you've made over £100,000 for doing nothing.

Not to mention the fact he's ugly.