With the field so widely spread, I thought it would be interesting to see what odds bookies are offering on the 2008 U.S. Presidential election. I think the odds on Clinton and Obama are quite poor at this stage of the race, while some of the outsiders may well be worth a punt.

Of the Top 10, six are Democrat and four are Republican. This doesn’t necessarily mean the Democrats are favourites though – instead it probably means there’s fewer standout Democrat candidates.

In fact, you’ll get odds of 4/5 on a Democrat President and 11/10 on a Republican in the White House, suggesting the Democrats are currently ahead. But if a Republican pulls away from President Bush’s shadow, that will all change.

If we’re talking bad odds, how about Arnold Schwarzenegger at 100/1. Being that he’s not eligible to stand, it seems a bit unlikely he’ll win.

And my tip? Well, I think Obama vs McCain looks the most likely at the moment, but I think that’ll change. I’d put money on Bill Richardson at 28/1 – he’s half Mexican, popular and won’t be seen as liberal. At the very least he’s got to be a possible for Vice President. If I had any money I’d lay a speculative pound or two. 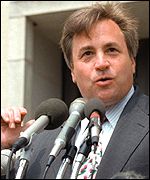 Dick Morris ran Bill Clinton’s re-election campaign in 1996. He’s since turned on his former boss, and even more so on his former boss’s wife. He gave a speech on Wednesday at the offices of Americans for Tax Reform:

It doesn’t come as a surprise to see Hillary Clinton announce a bid for the U.S. Presidency. But it does feel strange to hear her talking about it openly and passionately.

You see, for over a year now, Hillary’s said things like “We’ll see when the time comes”, “Whatever will be, will be”, and my personal favourite “I haven’t decided”.

She’s dodged every question about a potential run for the White House and so it’s nice to finally see her open up about her intentions. For one thing, it looked like a relief to her. When asked about a run, “I haven’t decided” was probably as close to a barefaced lie as you’ll get out of Clinton. She’s been working towards this for months.

There’s a train of thought that the last thing America needs is a inward-looking Bush-Clinton-Bush-Clinton theme to the Presidency. Hey, Jeb Bush might even make it five in a row!

But I’m not sure I give this ‘problem’ much truck, if only because the two families – apart from their obsession with politics – are so different.

For now though, I still find Barack Obama the more interesting candidate. Clinton spent eight years as the most proactive First Lady in history. We know pretty much what she stands for and what her priorities would be in office.

But Obama turns the personality up to 11. So if he can find a good reason to run, offer good answers to America’s problems and steady the rocky ship, then he’s got a pretty good chance of undoing the Bush/Clinton lock on the White House and ruining Hillary’s plans.

Hillary is quickly making moves in the 2008 Presidential Election before Barack Obama gets ahead.

She’s been putting calls into Iowa and New Hampshire, two of the first states to vote in the Democrat primaries, and shoring up support from local leaders. Adding complication, Iowan Governor, Tom Vilsack, has already announced he intends to run, although he isn’t the current favourite in his home state.

Clinton has, apparently, been making new appointments to her team, indicating she is starting to crank up the effort on key states.

She’s running top in most of the polls, but still being beaten by potential Republican challengers like John McCain.

The race is definitely on. Like it or not, the starting gun has been fired on the race for the most visible elected post in the world. The Democrats have broken first, with Iowa Governor, Tom Vilsack, in danger of jumping before the gun was fired.

The election for George Bush’s successor takes place on November 4th 2008. A full two years early, 55-year old Vilsack sought to breathe some of the pre-mayhem oxygen by going on a five-state tour outlining his vision for America. It’s a risky strategy, but given his low profile – and, it seems, his lowly chances of winning the Democrat nomination – it’s the best way to get ahead.

While his move didn’t force the rest of the field, comments by another contender are making waves in the Democrat race. Barack Obama, held up as the anti-Bush by his supporters, suggested last month he “might” think about running. Such is his credibility, it’s forced more established names like Hillary Clinton and John Edwards to rethink when they might officially throw their hats into the ring.

Senator Evan Bayh is another hopeful. He reacted to the Obama threat by announcing an “exploratory committee” this weekend. It doesn’t sound like much, but for the serious contenders, it’s their way of proving that they’re serious.

Looking forward, it looks like there will be two themes in the Democrat primaries. One is Iraq. Obama opposed it, while others didn’t. The other is Bill. Not being married to Bill Clinton is – bizarrely – going to be a major asset in 2007-8.

On the other side of the ring, the Republicans are playing much more quietly. They seem to be quite happy watching the Democrats argue and aren’t worried about getting involved yet.

Out in front are Rudy Giuliani and John McCain, but behind them are a number of people few Americans have heard of. That’s not to say it’s a sure thing that these two will make it. Both have ‘interesting’ pasts, with Giuliani fairly unpopular before two aeroplanes hit skycrapers in his city. And McCain is a political butterfly, appealing to some Democrats, but not necessarily to everyone in his own party. They’ll sit things out for a while, but it’ll be interesting to see the incumbent party start the race for 2008 as the underdog.

Perhaps the results of the midterms have made the Democrats think this is their big chance, causing them to rush out of the blocks.

What remains to be seen is whether the American public have the appetite for two years of wrangling, and whether it will damage either party to spend too many months naval-gazing.