This was a genuine screen-grab from CNN International.

Adam, I hear there may be a vacancy going…

George Bush has been regularly poking the Iraqi government with a knife.

Well now he’s stuck it in their back and is giving it a good twist.

He’s said the hanging of Saddam Hussein “looked like a revenge killing” and the Iraqi government still had “some maturation to do”. It’s as if he’s deliberately making Iraq look weak.

You almost wonder if he has two separate objectives: 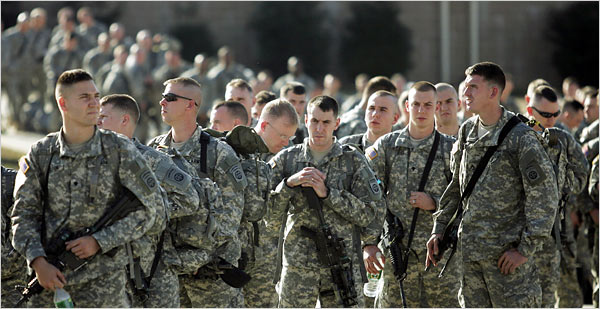 The United States goes to the polls today to elect a new House of Representatives and one-third of the Senate. It’s a make-or-break moment for both parties, but could yield greater dangers for the Democrats.

They’re expected to take the House of Representatives, and have an outside chance of grabbing the Senate too. But such high expectations mean that anything less will be seen as a victory for George Bush’s party. And the potential pitfalls don’t end late tonight.

If the Democrats gain the House, they’ll surely use their position – which as Adam Brookes points out isn’t that powerful – to initiate inquries into everything that took place over the last 6 years under George Bush. So we’ll see inquiries into Iraq, Afghanistan, global warming and anything else Bush has cocked up (a potentially long list).

But they risk being so righteous that they make themselves unelectable. Come 2008, with a Presidential election and a real chance to take the Senate – and the Democrats might have squandered their chances by appearing universally negative and leaving little time to invent ideas of their own.

They won’t win an election by posturing and screaming at the Republicans. They need ideas – on Iraq, Afghanistan, and of course global warming – and they need to start thinking on their feet.

Links: BBC US mid-terms blog | NY Times: For Democrats, Even Gain May Feel Like A Failure

When Gordon Brown gives his budget tomorrow, he'll probably begin by reeling off a number of economic indicators, which to be fair normally sound impressive. Things like "we've got the fastest growing economy in the G8" and "we've got the lowest unemployment in 30 years". And well done to him.

But then you hear George Bush try and do the same thing and he sounds like a gimp. At a briefing in Washington, he just came out with lines like this:

"We've got lower 'average' unemployment than in the 70s, 80s and 90s"
"We've got higher levels of investment than the whole of the EU combined"

And there were others…

Firstly, what does 'lower average unemployment' mean? Nothing to those on the dole, but nothing statistically either.

And secondly, whoop-de-doo! Higher levels of anything than the whole of the EU shouldn't be a big achievement for the US considering its size and the fact that newer members of the EU25 have relatively unadvanced economies.

Nothing he said suggested that the American economy was in a healthy state at all, but you can bet that the Americans will lap up his positive rhetoric, despite the completely hollow foundations that lie underneath Bush's statistics.

Hurricane Katrina: A Disastrous Response to a Natural Disaster

Whatever happened to this years silly season? Instead of stories about cats stuck in trees and people living to 115, weve had a summer of terrorism, politics and national disasters.

A bad summer has just been worsened by the worst hurricane in living memory, with predictions of thousands dead and a million homeless and jobless. A story such as this would perhaps not shock us too much after similar-sounding scenes in war-torn Darfur, annual monsoon seasons and the Boxing Day tsunami in South-East Asia.

But Hurricane Katrina shocks more because it has happened in the Southern U.S. state of Louisiana, and to a lesser extent its neighbours. An American life is clearly  and perhaps in contradiction to the medias treatment of the war in Iraq (notice the recent stampede that killed nearly 1,000, but gained relatively little reportage)  not worth more than those killed in the tsunami, or in other disasters occurring around the world. But because of the geography of this disaster, it jars more heavily: How has the situation got this bad in the worlds most powerful and resourceful nation?

Watching the pictures of refugees outside the Louisiana Superdome, it is unbelievable that such devastation of life has been allowed in one of the most industrialised nations in the world. Certainly, evacuations were announced two days before Katrina hit the mainland. But something clearly has gone wrong. A helicopter counting those stranded on rooftops gave up when they reached 10,000. And this is three days after the hurricane.

For a country proud of its ability to deal with emergencies (9/11, the San Andreas Fault and the regular hurricane season), Katrina has revealed major problems in the United States ability to cope with something on this scale. Today, President Bush said the level of devastation was worse than that suffered on 9/11. He is correct. While 9/11 affected a number of skyscrapers and extinguished the lives and livelihoods of thousands, Hurricane Katrina has caused the same devastation to an entire city with a population of around 1,200,000.

Questions which will be answered in the future include how will the U.S. economy deal with the overnight loss of over a million jobs? A presidency will be considered poor if over 8 years this many jobs are lost. But in one day? The effects on the economy may take some time to understand.

And then there is the eternal problem of oil. Half of the United States gasoline comes from the Gulf Coast, and much of it via Louisiana. One estimate suggested a gallon of oil may rise from $2.30 to $4.00, with a knock-on effect which will surely extend to Europes prices. In Louisiana, petrol prices have already risen to up to $6.00. Bush has warned that oil supplies across the country may become erratic.

Political questions will also have to be answered. The response to Katrina has been, it appears, shambolic. The poorest citizens of New Orleans  80% of which is still under water  were those left behind, with no public transport to evacuate them to safe areas. Reports suggest someone committed suicide in the Superdome due to the horrific conditions in the most iconic shelter in the city.

Where, also, are the armed forces? Iraq, is one plausible suggestion. But it seems unbelievable that such large-scale looting is being permitted considering the military strength of the United States. And they should surely be there in numbers to rescue the 50,000+ who have been without food and water for 72 hours. Food aid, more typically seen in Africa, is urgently needed and is seemingly non-existent.

All this seems to boil down to a lack of preparedness and a shockingly poor response from the federal government. President Bushs response has not matched the gravity of the situation. Lets remember that thousands are likely to have died, and 0.5% of the countrys population has been made homeless. The refugees are being diverted to Texas, which Mr Bush supposes will rise to the challenge by opening its doors to disaffected people.

This reliance on peoples generosity is perhaps a little naïve, in a country which as Robert Putnam analysed in Bowling Alone has a sense of society which is more dis-United than any other democracys. Where are the government refugee camps? It seems questionable whether 1,200,000 people can be accommodated in the homes of other Southern Americans, and those who will lose out will surely be those most in need.

Americans aversion to a welfare state may very likely extend to a reluctance to offer long-term help to a city which must rebuild itself from the ground-up. Im afraid I rather expect a response along the lines of its not my problem.

The US seems willing to allow itself to divide by class just as well as the most corrupt African states: the poor and unfortunate will be those given the least help.

A large degree of environmental evidence suggests that New Orleans should not be rebuilt in its former state. Many feet below sea level, and beneath the level of the Mississippi River, it seems ill-conceived, and as one commentator pointed out today, was the result of trade being considered more important than environmental safety when the Pioneers founded it.

But the city must be rebuilt somewhere, in some form. Yes, the short term focus must be on rescuing the survivors whose lives are in immediate danger. This has been badly managed so far. Where will these survivors go once rescued? How will they become economically independent again?

For a country at the pinnacle of technological and  its ideological supporters would have us believe  cultural progress, the United States response to Hurricane Katrina has been appalling.

President Bush is, in mishandling the rescue operation and the long-term security of the people of New Orleans, slowly handing the 2008 Presidential election to the Democrats. Indeed, Mr Bush needs to quickly work towards the return of normality before his and his partys reputation for handling disasters  let alone his legacy  is irreparably damaged.

But furthermore, fewer people will be looking at the USA and its people in awe tonight, which will greatly endanger the premise of the countrys foreign policy. For it is not just the lives of those in Louisiana which are being destroyed  the reputation of the United States of America is being compromised by its inability to deal compassionately with its own people.