Appearances can be deceiving 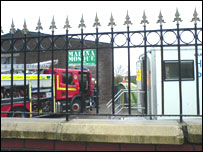 While editing a news programme yesterday, I got myself into a journalistic quandary. Police had said that they were looking for a man of “middle eastern appearance” in connection with an arson attack at Wales’s biggest mosque which happens to be about 500 yards from my home in Cardiff.

But what – or who – is someone of “middle eastern appearance”?

The likelihood is that the police already knew the man they were after, and probably knew also that he was Iranian. But as someone pointed out, don’t many southern Italians look a little “middle eastern”?

Where does the Mid-East start and end? It would be utterly wrong to describe people from the Mid-East as Arab or Muslim, so perhaps “middle eastern appearance” is a good, relatively inoffensive catch-all?

But the answer is that it’s just lazy. Lazy on the part of the police, and lazy on the part of us for not asking difficult questions about a statement from them which did little other than show up how little we know about non-white people.

What I’d like to know from anyone reading the blog is: are there any catch-all descriptions of groups of people which are suitable?