Should this woman be teaching in schools, dressed like this? 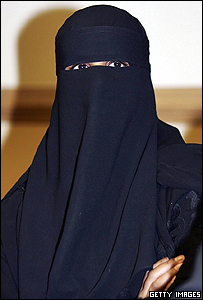 Aishah Azmi is the 23-year-old classroom assistant who today lost her tribunal at which she claimed she had been discriminated against because of her religion. She was awarded £1,100 for being “victimised”.

The worst thing about recent stories about Muslims integrating into Britain is that they’ve all been bound up into one neat and tidy heap for the media to plow through. This story is about an individual and should be treated as such.

But ignoring what was decided at today’s tribunal, do people think it is suitable for people to wear this sort of clothing (left), on religious grounds, in a class of schoolchildren?

On this occasion I tend to agree with Tony Blair when he says the full-face veil is a “mark of separation” and can make people feel uncomfortable. Especially when children are involved, don’t we need to be careful about their sensitivities as well as hers?

What do you reckon?