Well, what isn’t wrong with it? That’s almost the impression I got after a day spent observing the work of Her Majesty’s Courts. 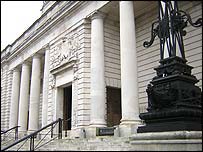 I sat in on the start of a case in Cardiff yesterday. A nineteen-year-old was charged with GBH after punching a man in the face. He admitted making the punch but denied the charge (he’ll probably be found guilty in my opinion).

Of course, it’s his right to plead ‘not guilty’. But I wonder whether the whole matter might not have been best settled out-of-court. The government have played with the idea of on-the-spot-fines for minor offences. And this case – with neither party appearing particularly innocent – would have been much more easily settled with some money changing hands.

The cost of the case must have been enormous. Two barristers, a judge, a security guard, three legal assistants and several witnesses were all required, not to mention 14 jurors (two more than strictly necessary). It’s unlikely a jail term would be appropriate unless he’s got form, and in all likelihood, he’ll get a fine and maybe community service.

At a very rough guess, it’s probably cost over £10,000 for this case to come to trial. And yet the Crown Prosecution Service – cheekily called the Criminal Protection Service by some – ignores other cases because they don’t think they’re worth pursuing.

It seems the CPS needs far more resources to do its job properly. The assessments it makes seem a little slap-dash. And with prison a relatively pointless, and horrendously expensive exercise*, isn’t court very often a waste of time and money?

I can’t think of anyone who benefited from this case coming to court. And yet the taxpayer is probably funding hundreds of these wasteful cases every day. Is justice for minor crimes really worth it?

*The consensus about prison seems to be shifting. Few people still regard it as a method of rehabilitation. Given the overcrowding and drugs problems in prisons, it is merely seen as ‘punishment’.

I’ll let you know the outcome of the trial if I can find it out. Oh, and just for legal reasons: The case continues.

Being woken at 3am by a U.F.O. is slightly scary.

However it does mean that when you realise it’s not a U.F.O., but a police helicopter shining a spotlight on your window, it is somehow reassuring.

Of course when the cops are running through your garden it does remind you that a murderer on the loose could actually be worse than having an alien in your garden..

Q. How many murders in the U.S. last year?

And 92,000 rapes. Remember those are just the ones that get reported.

And in the UK? About 853 murders per year is the best figure I can find. Bear in mind our population is about one–fifth that of the U.S.

Incidentally, the UK government couldn't be less transparent if it tried when it comes to reporting crime. Its figures are given as occurences per 1000 people, making it virtually impossible to work out accurate totals.