I sometimes wonder if George Osborne is making calculated decisions to try and put himself out of a job.

Whether it’s because he doesn’t really want to be Chancellor, or because he knows someone else could do the job better and he doesn’t want to admit it, the Shadow Chancellor seems to be digging his own grave as fast as he can.

After accusations that he’s been too soft on the government’s handling of the economic crisis, he comes out with this:

Britain is heading for a collapse in the pound

You bet it is when the Shadow Chancellor predicts it. Just watch the price of Sterling collapse on Monday morning. I’ve always thought Osborne came across as incredibly naive – this is the best example so far.

There are a million ways to tackle Brown and Darling on the economy. The Tories’ chosen ones haven’t been working. Labour is gaining on them in the polls, and the Lib Dems have been making the running on the issue for months.

Opinion is split on Conservative Home, between those who want Osborne gone (probably in favour of David Davis) and those who defend him mainly because he’s a Conservative. The Telegraph’s opinion of Osborne is pretty rock-bottom, with countless critical pieces written about him this week.

There’s no way that David Cameron can win an election and then keep Osborne in the second-most important job in the government. He might as well make the switch sooner rather than later.

David Cameron would win a general election by 54 seats, based on voting patterns in last week’s local elections, according to a study published this weekend.

The world and his dog know that local elections are used as protest votes and are always worse for the Government than a general election.

There’s not much here for Tories to crow about. 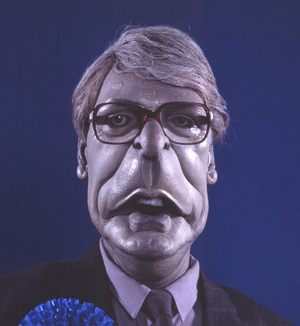 You might expect, a day before local elections in England and slightly more important ones in Wales and Scotland, that there might be just a little bit of electioneering going on. There is, but not much. The best he can really manage is:

it is once again becoming an exciting time to be a Conservative. Most of our party understand that we will only win if we recapture the centre ground as well as holding the centre-right.

...which is more navel-gazing than soap-box. You don’t expect the finest flowing rhetoric from Major, but he could have tried a little harder.

His article is a criticism of Labour spin – an argument that set sail long ago, really – but many of his criticisms are as easily applied to his successor-but-three, David Cameron. He says:

new Labour only has sound-bites and apparatchiks, careless of constitutional proprieties, who will use any unscrupulous trick to benefit the Government

...but replacing Labour for ‘Conservative’ and Government for ‘opposition’ doesn’t really stretch the imagination. David Cameron himself is the Master apparatchik, regularly employing unscrupulous tricks and gimmicks at PMQs. Admittedly, he’s not had time to prove a disdain for the constitution, but that’s much easier to try from the opposite bench.

Which begs the question… if John Major dislikes spin so much, and in his retirement can maybe see through partisanship a little, does he like Mr Cameron? His Conservatism seems, from the available evidence, pretty detached from that of the 1990s, when Major was in charge. But on policy it’s probably fair to assume they’re still not very far apart. In style however, they are Ying and Yang, Beauty and the Beast, Pete Doherty and Cliff Richard.

Some of his criticisms are notably not aimed at the government, but are a broader view of British political parties. Is he tempted to make his views of Cameron more explicit, or does he not need to?

Cameron tries to win over the Welsh

If Cameron wants to be taken seriously, he needs to dump Osborne

From suggesting Gordon Brown was “faintly autistic” to getting someone to analyse his opponent’s handwriting, Osborne has been using the politics of the playground, and embarrassing the far more professional Cameron.

Cameron has styled himself as Blair Mk.II, and seems determined to replicate the close friendship with his Chancellor, no matter how inexperienced and useless he may be.

But for the party’s economic policies to be taken seriously, he needs someone presenting them who doesn’t look like a smug schoolboy. If Osborne is to be remembered for his pot-shots on Gordon Brown’s personality, rather than for new ideas about the economy, then he is in danger of becoming a major drag on the Conservatives’ new agenda. And what did I think?
I thought it was a pretty good speech, with some very welcome passages on civil partnerships which didn’t go down very well with some of his audience. I don’t blame him for not coming up with any policies yet: he knows Brown will only steal them in 2007. True, he has a lot of style, but the lack of substance is excusable this far away from an election. It’ll be interesting to see whether the policies he eventually unveils strike a chord with the British public.

What might worry people isn’t Cameron, but the people behind him. From the leaks and drips, it sounds as if many within his own shadow cabinet have quite different ideas about how the country might look in 2009/10. Rumours of ‘unlimited privatisation’ in the NHS and mixed messages over Jamie Oliver’s school meals campaign suggest that unless the party unites behind Cameron, we won’t have a clue who we’re supposed to be voting for at the next election.

When was the ground lost?

Listening to David Cameron give his Spring Conference speech in Manchester, the thing that strikes me is that he is walking all over traditional Labour territory without anyone fighting back.

On the environment especially, Cameron isn't promising policies, but an approach which Labour should have been advancing for the past nine years, but have failed to do so.

For the Conservatives to be so far ahead of the government on this issue suggests that something has gone hurrendously wrong in the Labour Party. Is it a conflict between the DTI and DEFRA? Is it the Chancellor putting his foot down? Have they simply taken their eye off the ball? Who knows.

But listening to Cameron (who so far has been impressive), I don't see how Labour will fight back against the Tories come the next election now that it is Cameron, not Blair/Brown, who rhetorically appears to be a policy innovator, even if that means stealing Labour's traditional clothing.