Mentioning Joe Cornish (of Adam and Joe) in my last entry sent me on a whirlwind tour of their various websites. I found this, and given it’s only had 80,000 hits so far, thought it deserved a reshowing here.

Did you get the joke?

Eurovision. Did you get the in-joke? Because I didn’t.

But the blonde girl who kept sticking her ore in throughout the evening was – apparently – a spoof. Krisse Salminen is a Finnish stand-up whose routine is to prance around like a cross between Miss Piggy and Paris Hilton.

Unfortunately, Finnish comedy doesn’t seem to travel very well, and no-one seems to have realised she was a joke.

Perhaps they should have tried Borat. 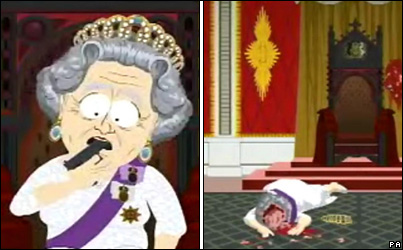 Comedy… with a dark side too

Tim Minchin is a very funny man. He’s also a sickeningly talented musician. Rather than have two – I suspect – very successful careers, he’s merged the two. This hasn’t bought him as much success as it should have done. He won a big award in 2005, and has done some modest work on Radio 4 since. But I can hear you saying “Who?” from here.

If his performance at the Sherman Theatre in Cardiff was anything to go by, he’ll be a much more familiar name soon.

He’s a physical comedian, but not quite in the same way as Eddie Izzard or Ross Noble. He hides behind his piano, his clothes and his enormous hair! There’s a bit of shyness there, but it’s hard to tell whether it’s genuine.

His musical ability is really very good indeed. Not only is he a fantastic pianist and an amazing vocalist (think a rougher Damien Rice vocally) but his songwriting is really top notch. A couple of his songs are so well written that they’re funny on stage but could be fairly genuine if heard on the radio.

It’s hard to describe him much more than that, so I’ll just list some of his song titles to give you an idea of what he’s about…

You Say, We Pay

And yes, I should be revising.

After spreading a bit of Tim Minchin love last month, I decided it was only right to offer some more musical comedy at this festive time of year. Here’s Rob Paravonian with a brilliant rant about Pachelbel’s Canon in D. You know the tune, but does it drive you this mad? I think it gets funnier the longer it goes on.

How to replace Trident, by Prof. Christopher Doidge

Ladies and Gentlemen. Since the 1950s we’ve been whinging about nuclear weapons and how they’re so expensive. We’ve never used one, and frankly don’t intend to. Yet it’s imperative for the survival of our race that we have them.

Well I, Professor Christopher Doidge, have invented a replacement for Trident, which I shall call Trident II. And here, live on the internet, I can reveal it for the first time: Here’s how it works.

We tell the Russians, Iranians, North Koreans and al-Qaeda that we’re spending £17bn on a new nuclear weapons system. We tell CND (if they still exist) that we’re reducing the number of warheads by 20%. And we continue to tell the Americans that we’re still important, in what will only ever amount to willy-waving.

And then we don’t bother.

We stash the money in the British Virgin Islands (what’s the point of having them if we don’t use them ourselves) and in 2024 ‘unveil’ these clever looking submarines which are actually props from Tomorrow Never Dies. They’ll be empty, but no-one will know.

And so that way we’ll continue to scare the shit out of the Russians, Iranians, North Koreans and al-Qaeda, continue to piss off CND, and be able to pretend that we’re still important. Without actually wasting £17bn on something that we’ll never use.

In fact, it makes you wonder if we even have any at the moment…

My sister tells me this Tim Minchin video is even funnier than the one below, so in my endless search to make him famous and single-handedly sell-out his upcoming British tour, here’s another one…

This is probably the funniest comedy I’ve seen since Eddie Izzard. He’s an Australian guy and won the Perrier Award when it was still called the Perrier Award. I prefer Rock and Roll Nerd but can’t find video of it, so here’s Environmental Message.

Why do I seem to like comics who wear eye-liner…?

Don't watch that, watch this!

Rob Brydon's got a new panel-based game show coming to BBC Three, and it is the funniest TV you'll see all year.

Yep, 'panel–based game show' might strike you as not perhaps the most original format ever indulged in by our beloved television bosses, but Annually Retentive is a cut above the rest.

I don't want to spoil it for you, except to say that there's an unexpected twist to the programme.

You'll regret not clicking here to watch a preview episode.