As part of the Broadcast Journalism course at Cardiff I have to do something a little bit counter-productive and paradoxical:

Certain lectures have to be ‘blogged’ for assessment. But as the former editor of the Telegraph website told us yesterday, you should only blog if you’ve got anything interesting to say. And when it comes to many of these lectures, I don’t.

Blogging should be from the heart, which means you have to want to blog on a subject, not be told you have to. I’d be intrigued to know if anyone has successfully “blogged on-demand”, keeping up a regular schedule of entries, or had any success in blogging about topics they’ve been told to write about.

Surely blogging is a little bit like writing a novel, and how often do novelists get told by their publishers what their next book must be about?

I suspect “never” isn’t far from the truth.

So I’m afraid you’ll have to be excused a 200-word entry on the merits of broadcasting regulation, the divide between editorial and advertising or any of the other topics on which I have no great interest in expressing a meaningful opinion on. Being woken at 3am by a U.F.O. is slightly scary.

However it does mean that when you realise it’s not a U.F.O., but a police helicopter shining a spotlight on your window, it is somehow reassuring.

Of course when the cops are running through your garden it does remind you that a murderer on the loose could actually be worse than having an alien in your garden..

I’m on my way to Cardiff to deliver a lecture on new media to media studies post graduate students and have been listening to Today on Radio 4.

What a ruddy cheek. He’s about to get an utter rollocking from the JOURNALISM students he’s about to address! 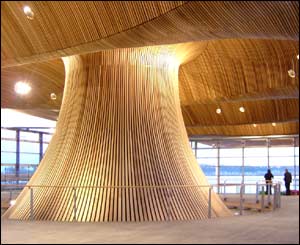 The Science of Headlines

What makes a good headline?

According to Amanda Powell (right), editor of BBC News Online in Wales, there’s far more to it than you’d imagine, and it’s all about trying to feed you the bare bones of the story as quickly as possible.

At the moment, users of BBC News Online spend an average of 3.12minutes on the site every time they visit and Amanda says they’re trying to get you to view more stories in those 3.12mins.

How do they do this? By feeding you as much information as they can at the top of the story, and that means in the headline and the summary. As a result, a lot of work goes into getting these right. Believe it or not, the BBC’s content production system makes you choose a headline of 31-33 characters, which is pretty precise. This is so it can work on Ceefax and mobile phones, as well as the web.

Check out this story from the Press Association:

This headline seems to strike a delicate balance between describing what is essentially a dull, albeit amusing story, and grabbing the reader’s attention. The words “UK cheese row” offset the audience-killing “European Commission”.

But if the aim of the exercise is to help you read as little of the story as possible in order to understand it, is that necessarily a good thing? Aren’t journalists shooting themselves in the foot if they try and help you consume as little as possible of their work? It’s an interesting one and makes me feel reporting can sometimes be a little artless.

Check out the Wales pages on BBC News Online here

Land of the leek and the leak

So, I’m here in Cardiff and finally have internet access (albeit limited by my own incompetence when it comes to understanding routers).

My gosh, it does like to rain here, doesn’t it? They say that when it rains, it pours, and that does seem to have been the case so far. Luckily Rachel bought me an umbrella for my birthday so I won’t get quite so soaked as on Thursday when I was still wet when I went home at 5pm from my 10 minute walk to uni at 9am that morning. Not pleasant.

The Welsh are much more protective of their identity than us English lot. I think we’ve realised that we’re mostly a load of chavs, wasters and good-for-nothings, but the Welsh don’t seem to have realised (yet) that they’re just as bad. You’d think that Goldie Lookin’ Chain and Charlotte Church would have been a good indicator though.

As part of my journalism course we have to choose a patch such as “Cardiff Central”, “Business” or “Welsh Assembly”. It’s all very political. Some of our Welsh colleagues seem to think us Englishers wouldn’t understand the Assembly (hey, it’s bureaucracy, I’d be amazed if anyone could) and we’d probably be better off covering planning applications and funerals. They might be right. We’ll find out soon.

Welsh politics is predictably small scale because of the limits on Assembly business. Things might change next year though as its powers increase.

In the meantime, I’ll try and find some interesting gossip and laugh at Tories. Business as usual, really.

Well, not quite, but I've got a House!

At 9am this morning, I had no housemates, no house, and quite frankly, no clue.

At 9pm tonight, I have four housemates, one house and quite frankly, am sorted.

Next year I'll be living in what will probably become known as the 'Purple' House. It's not purple, but the staircase is. I'll be living with Helen, Ruth, Caz and Paddy, none of whom I had met until today, but all of whom (with the exception of Paddy who I haven't met yet, but am assured is lovely) seemed great and should make great housemates. Doing the same course will assure mutual sympathy for being overworked.

And here's a reason not to go to Warwick: the rent. You might only just realise it while you're there, but Leamington's a rip–off. For a nicer property you can pay far less (I'm on about £48 a week now) and the city seems much nicer.

So it'll be a bit late now, but my advice for people who don't have anywhere to live in Warwick yet… Commute. From Cardiff.